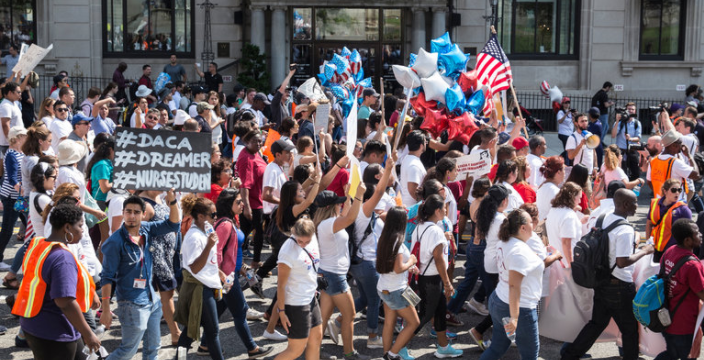 Immigration is the issue where the New York Times’ liberal lean is most obvious, a truth underlined in Friday’s edition, showing the paper still grieving over President Trump’s decision to eliminate the unilateral, constitutionally dubious Obama administration diktat, the Deferred Action for Childhood Arrivals, which temporarily protected from deportation illegals who came to the United States as children.

She wrote on Friday:

It is not just the threat of deportation that is hanging over Amparo Gonzalez. The 31-year-old single mother could also lose her job at a warehouse company, even if she stays in the country. With it would go the health insurance she gets through her employer, which covers her 13-year-old daughter, as well as the exams and treatments that Ms. Gonzalez needs for her chronic colon disease.

“I lose everything without DACA,” she said, referring to the Deferred Action for Childhood Arrivals program that President Trump moved this week to eliminate.

With the news that roughly 800,000 people across the country would begin losing their protected status under DACA, which offered work permits and temporary reprieves from deportation to young undocumented immigrants, the program’s beneficiaries are now scrambling to prepare for the various ways the decision could upend their lives.

Liberal rhetoric aside, it seems DACA recipients do get their share of government benefits.

Living and working in the United States are the two privileges most often associated with DACA. But for many recipients, those are merely the first dominoes to fall if Congress does not pass a replacement. The shutdown of the program could reverberate far beyond those privileges and topple the many others that DACA protection can confer, from state-sponsored health coverage and financial aid to driver’s licenses and professional credentials. The loss of these things could, in turn, disrupt recipients’ abilities to go to school, support their families and keep a roof over their heads.

In a sense, Trump is merely throwing the issue to the states.

The extent of the impact will depend largely on where recipients live. DACA beneficiaries were never eligible for federal health care programs like Medicaid or Medicare, nor for federal student loans; many of the rights and privileges they enjoyed are regulated at the state level. Some state governments may pass new laws or interpret existing law in ways that allow benefits to continue; others may not.

If state efforts in New York and California are unsuccessful, a combined 265,000 DACA recipients in those states will retain access to in-state college tuition, but may lose access to state-subsidized health care benefits.

Recipients in Arizona and Georgia may face the worst circumstances. The 50,000 in those states are already largely excluded from in-state college tuition, state-funded loans and grants, and subsidized health care; they would also lose the right to drive, and in Alabama, Georgia and South Carolina, they would be barred entirely from enrolling in some colleges and universities.

Many DACA recipients became beacons of stability in their families, and immigrant advocates said that the changes would extend beyond the recipients themselves.

Dickerson finally quoted an opponent of DACA in paragraph 21, then mildly suggested the program was unconstitutional without using the word:

“You’re essentially allowing parents to pass on to their children the benefits that they broke the law to obtain,” said Dan Stein, the president of the Federation for American Immigration Reform, which supported Mr. Trump’s decision. Mr. Stein added that the elimination of DACA would serve as a necessary deterrent for people who consider crossing the border illegally.

Mr. Stein’s views are representative of many who believe that President Barack Obama did not have the authority to create the DACA program in the first place. “Nor do states have the right to run their own immigration program for people who have no right to be in the country,” he said.

Economist turned Democratic-hack Paul Krugman had a typically harsh take, assuming a racist Republican Party in his Friday column “Dreamers, Liars and Bad Economics.” The text box: “A cruel action that hurts everyone except racists.”

To yank the rug out from under the Dreamers -- perhaps even to use the information they supplied voluntarily to harass and deport them -- is a cruel betrayal. And it’s self-evidently driven by racial hostility. Does anyone believe this would be happening if the typical Dreamer had been born in, say, Norway rather than Mexico?

Apparently, the United States is the only country not allowed to decide who gets to live there.

The official administration line is that Trump had no choice, that he was regretfully taking harsh action because DACA was an illegal exercise in executive power -- which was also supposedly the reason the statement came from Sessions rather than the president himself. Actually, the legal case for DACA is pretty strong, and putting Sessions in front was probably about Trump’s cowardice more than anything else....

Krugman doesn’t deign to lay out this “pretty strong” legal case, perhaps because he silently suspects the opposite. As Irwin M. Stelzer rhetorically asked at The Weekly Standard, “Are you willing to subvert the Constitution and allow the president to appropriate power that the Constitution reserves for Congress in order to allow these young adults to remain here illegally?....are you willing to set a precedent that would allow the current resident of the White House to -- with a stroke of the pen -- lower taxes on the rich? Close down newspapers that displease him? Bar immigrants of a certain religion?”

The truth is that letting the Dreamers work legally helps the U.S. economy; pushing them out or into the shadows is bad for everyone except racists....In short, letting Dreamers work is all economic upside for the rest of our nation, with no downside unless you have something against people with brown skin and Hispanic surnames. Which is, of course, what this is all really about.