Veteran journalist Kurt Andersen’s 13,000-word cover story for the September issue of The Atlantic, “How America Lost Its Mind,” adapted from Andersen’s new book, is an attack on Trump and what he sees as the Republican Party and conservatve movement's recent retreat from reality. But Andersen skips Democratic embrace of conspiracy theories, and assumes the media was fair and balanced before Rush Limbaugh's "unending and immersive propaganda" and Fox News came along.

He got off on the left foot by citing liberal pop-culture hero Stephen Colbert. 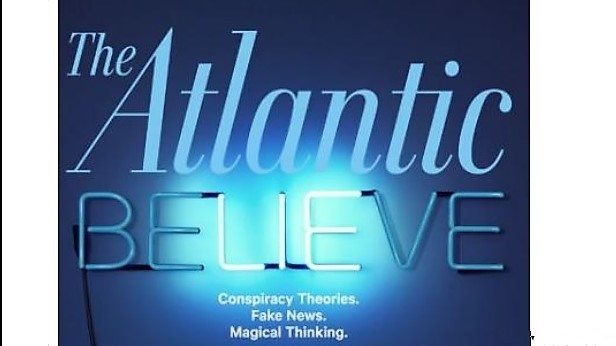 When did America become untethered from reality?

I first noticed our national lurch toward fantasy in 2004, after President George W. Bush’s political mastermind, Karl Rove, came up with the remarkable phrase reality-based community. People in “the reality-based community,” he told a reporter, “believe that solutions emerge from your judicious study of discernible reality … That’s not the way the world really works anymore.” A year later, The Colbert Report went on the air. In the first few minutes of the first episode, Stephen Colbert, playing his right-wing-populist commentator character, performed a feature called “The Word.” His first selection: truthiness.....

We have passed through the looking glass and down the rabbit hole. America has mutated into Fantasyland.

Almost a quarter believe that vaccines cause autism, and that Donald Trump won the popular vote in 2016. A quarter believe that our previous president may be or definitely was (or is?) the anti-Christ. According to a survey by Public Policy Polling, 15 percent believe that the “media or the government adds secret mind-controlling technology to television broadcast signals,” and another 15 percent think that’s possible. A quarter of Americans believe in witches. Remarkably, the same fraction, or maybe less, believes that the Bible consists mainly of legends and fables -- the same proportion that believes U.S. officials were complicit in the 9/11 attacks.

The article contains some interesting observations, like the fact that the far-right and far-left both indulge in conspiracies about “detention camps for dissidents,” but is marred by the slant. Warming up to his point, Andersen insisted in a subhead “How the Right Became More Unhinged Than the Left.”

The Reagan presidency was famously a triumph of truthiness and entertainment, and in the 1990s, as problematically batty beliefs kept going mainstream, presidential politics continued merging with the fantasy-industrial complex.

Just before the Clintons arrived in Washington, the right had managed to do away with the federal Fairness Doctrine, which had been enacted to keep radio and TV shows from being ideologically one-sided. Until then, big-time conservative opinion media had consisted of two magazines, William F. Buckley Jr.’s biweekly National Review and the monthly American Spectator, both with small circulations. But absent a Fairness Doctrine, Rush Limbaugh’s national right-wing radio show, launched in 1988, was free to thrive, and others promptly appeared.

For most of the 20th century, national news media had felt obliged to pursue and present some rough approximation of the truth rather than to promote a truth, let alone fictions. With the elimination of the Fairness Doctrine, a new American laissez-faire had been officially declared. If lots more incorrect and preposterous assertions circulated in our mass media, that was a price of freedom. If splenetic commentators could now, as never before, keep believers perpetually riled up and feeling the excitement of being in a mob, so be it.

Limbaugh’s virtuosic three hours of daily talk started bringing a sociopolitical alternate reality to a huge national audience. Instead of relying on an occasional magazine or newsletter to confirm your gnarly view of the world, now you had talk radio drilling it into your head for hours every day. As Limbaugh’s show took off, in 1992 the producer Roger Ailes created a syndicated TV show around him. Four years later, when NBC hired someone else to launch a cable news channel, Ailes, who had been working at NBC, quit and created one with Rupert Murdoch.

Fox News brought the Limbaughvian talk-radio version of the world to national TV, offering viewers an unending and immersive propaganda experience of a kind that had never existed before.

For Americans, this was a new condition. Over the course of the century, electronic mass media had come to serve an important democratic function: presenting Americans with a single shared set of facts. Now TV and radio were enabling a reversion to the narrower, factional, partisan discourse that had been normal in America’s earlier centuries.

Andersen only portrays a single side of ideological slant, as if the major networks were fair and balanced before nasty Fox News came along.

People on the left are by no means all scrupulously reasonable. Many give themselves over to the appealingly dubious and the untrue. But fantastical politics have become highly asymmetrical. Starting in the 1990s, America’s unhinged right became much larger and more influential than its unhinged left. There is no real left-wing equivalent of Sean Hannity, let alone Alex Jones. Moreover, the far right now has unprecedented political power; it controls much of the U.S. government.

Why did the grown-ups and designated drivers on the political left manage to remain basically in charge of their followers, while the reality-based right lost out to fantasy-prone true believers?

One reason, I think, is religion. The GOP is now quite explicitly Christian....

But also starting in the ’90s, the farthest-right quarter of Americans, let’s say, couldn’t and wouldn’t adjust their beliefs to comport with their side’s victories and the dramatically new and improved realities. They’d made a god out of Reagan, but they ignored or didn’t register that he was practical and reasonable, that he didn’t completely buy his own antigovernment rhetoric. After Reagan, his hopped-up true-believer faction began insisting on total victory. But in a democracy, of course, total victory by any faction is a dangerous fantasy.

Another way the GOP got loopy was by overdoing libertarianism. I have some libertarian tendencies, but at full-strength purity it’s an ideology most boys grow out of.....

I’m reminded of one of H. L. Mencken’s dispatches from the Scopes “monkey trial” in 1925. “Civilized” Tennesseans, he wrote, “had known for years what was going on in the hills. They knew what the country preachers were preaching -- what degraded nonsense was being rammed and hammered into yokel skulls. But they were afraid to go out against the imposture while it was in the making.” What the contemporary right has done is worse, because it was deliberate and national, and it has had more-profound consequences.

Andersen didn’t boost the credibility of his screed when he cited the slanted “fact-check” site Politifact: “The fact-checking website PolitiFact looked at more than 400 of his statements as a candidate and as president and found that almost 50 percent were false and another 20 percent were mostly false.”

David Harsanyi at The Federalist pointed out it goes both ways, although the media doesn’t always notice Democrats being conspiratorial.

....People are willing to believe implausible things about their opponents. They always have been.

In one 2006 University of Ohio/Scripps Howard poll, pollsters asked Democrats, “How likely is it that people in the federal government either assisted in the 9/11 attacks or took no action to stop the attacks because they wanted the United States to go to war in the Middle East?” Just over 22 percent of Democrats claimed it was “very likely” and over 28 percent called it “somewhat likely” -- which means more than 50 percent of Democrats were ready to believe that a Republican administration had in some way instigated or allowed the worst terror attack in its history to start a war. Another poll showed 35 percent of Democrats believe President Bush knew about 9/11 beforehand.

Strangely, Andersen’s piece, which purports to be an objective overview of irrationalism in public life, features ten instances of “Republicans” but no “Democrats.” Andersen called out Republicans here: “Only in the fall of 2016 did [Trump] grudgingly admit that the president was indeed a native-born American -- at the same moment a YouGov/Huffington Post survey found that a majority of Republicans still believed Obama probably or definitely had been born in Kenya.”

Yet when he talked of support for the conspiracy theories that “U.S. officials” had advance knowledge of the 9-11 attacks, his vague wording left off the inconvenient fact that it was Democrats accusing Bush of advance knowledge.