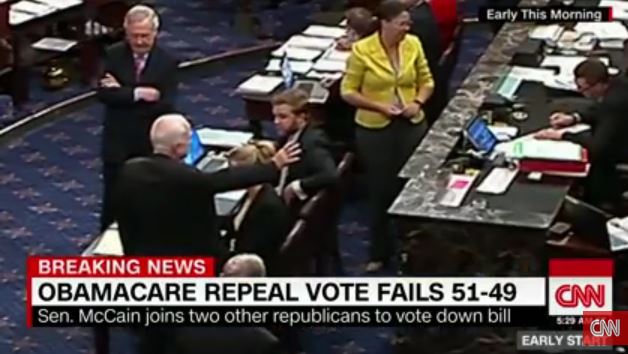 Front-page news: Republican opposition to ObamaCare had little to do with spiraling costs, giveaways to insurance companies, or the rationing dangers and proven inefficiencies of government-run health care. According to the front of Saturday’s New York Times, it all came down to anti-Obama "anger" and "rage."

“An Angry Vow Fizzles for Lack of a Viable Plan -- After 7 Years, G.O.P. Can’t Turn Rage Into Results” was the A1 story from reporters Matt Flegenheimer, Jonathan Martin and Jennifer Steinhauer, all of whom are regular subjects at Newsbusters.

It was a fitting conclusion to the NYT’s coverage of the so-far unsuccessful Republican drive to repeal the Affordable Care Act. For the last seven years Times reporters, not all of whom have a death grip on free-market principles, snidely insisted that Republicans were aligned against it not on principle, but for reasons of cruelty and anti-Obama racism (especially from the Tea Party), while insisting it would be a bargain.

The closing argument was a curious one: Vote yes, Republican leaders told the holdouts in their conference. We promise it will never become law.

After seven years of railing against the evils of the Affordable Care Act, the party had winnowed its hopes of dismantling it down to a menu of options to appease recalcitrant lawmakers -- with no more pretenses of lofty policy making, only a realpolitik plea to keep the legislation churning through the Capitol by voting to advance something, anything.

They ended up with nothing.

By the early morning hours of Friday, the animating force of contemporary Republican politics lay in ashes, incinerated by three Republican senators -- John McCain of Arizona, Susan Collins of Maine and Lisa Murkowski of Alaska. But the spark can be traced back to the hot summer of 2009, and to Winterset, Iowa.

It was there, and at town hall forums that tested fire marshals’ collective patience across the country, that the Republican rage ignited in earnest. Senator Charles E. Grassley, the state’s senior senator, was scorched after protracted negotiations with Democrats on what would become the Affordable Care Act. He peeled away, other Republicans followed, and Democrats were left to pass the health law on their own.

“You had 300 to 700 people and one time 900 people” at the town halls of 2009, Mr. Grassley recalled in an interview on the history of the Affordable Care Act. “We had to hold the town meetings outdoors, and the audience, I never had that sort of anger.”

In Winterset, Mr. Grassley fanned the flames about so-called death panels, saying, “You have every right to fear.”

The election of Mr. Trump was supposed to be the unlikely answer to a seven-year question for Republicans: how to make good on their agenda-defining oath to undo President Barack Obama’s signature achievement.

But if the death knell came with Mr. McCain’s downward-turned thumb early Friday morning, the bill’s failure has far deeper roots in this star-crossed era of unified Republican government.

The fierce Democratic town hall protests in favor of Obamacare for some reason weren’t seen by the NYT as angry or full of rage, merely “boiling.”

The House pressed on, slogging through boiling town halls that called to mind the Democrats’ fate in 2009.

In the upper chamber, where Republicans hoped to develop their own bill, the stumbles arrived quickly. Senator Mitch McConnell of Kentucky, the majority leader, assembled a working group of 13 senators to draft the legislation -- all of them male -- excluding Ms. Murkowski and Ms. Collins.

Concerns came not just from moderates like Ms. Collins but from reliable Republicans in some unlikely places: Senator John Hoeven of North Dakota, Senator Jerry Moran of Kansas, Senator Ron Johnson of Wisconsin, who told any reporter within earshot that he did not have enough information to even form a firm opinion.

[President Trump's] recruitment efforts grew more ham-fisted with time. After a vote on Tuesday to proceed to a debate on health care repeal, which only Ms. Murkowski and Ms. Collins opposed among Republicans, Ms. Murkowski received a phone call: Mr. Trump had directed his interior secretary, Ryan Zinke, to remind the senator of issues affecting her state that are controlled by the Interior Department, according to people familiar with the call.

And Mr. McCain’s startling diagnosis of brain cancer had an impact -- and not just on him.

The Times really used Sen. John McCain’s story for all it was worth. (The paper had far different treatment of him back in 2008 when he was the last person between Barack Obama and the White House, actually talking about the “privileged past” of someone who spent five-and-a-half years in a P.O.W. camp.)

Mr. Trump has spoken often of leverage in negotiations. On Friday, he had none. It is difficult, in the best of circumstances, to strong-arm an octogenarian war hero battling brain cancer.

And two years ago this month -- in Iowa, inevitably -- Mr. Trump had disparaged him for being captured in combat.

Shuffling across the chamber, Mr. McCain convened with Democrats, informing them of his choice. “They can read my lips,” he said to laughs, fearing his hand would be tipped ahead of time from inside the gallery.

At one point, the senator joined Ms. Collins and Ms. Murkowski, telling them they had done the right thing.

“We talked about how if anyone knew about doing the right thing it was John McCain,” Ms. Collins recalled. “It was very moving.”