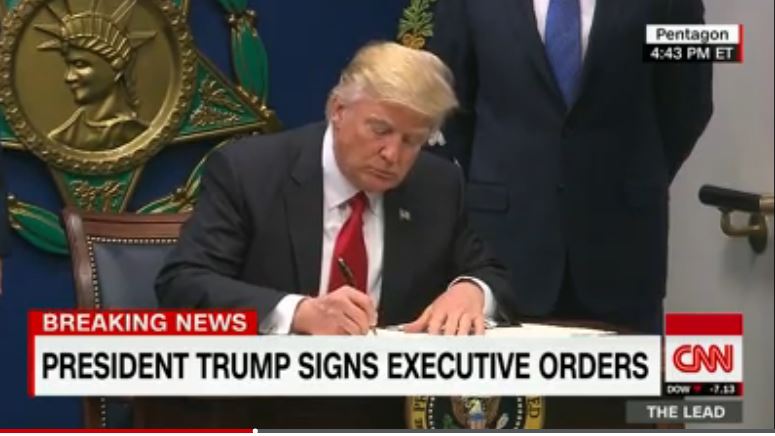 Some serious bias by omission about President Trump’s executive order Friday on immigration, especially in the New York Times, none of whose reporters appeared to have actually read it.

The order covered seven majority-Muslim countries. Three are state sponsors of terrorism: Iran, Syria, Sudan; three are “countries of concern”: Libya, Somalia, Yemen. But Trump’s executive order contained no actual list of those countries – only Syria was mentioned by name – because it has its roots in previous legislation, The Visa Waiver Program Improvement and Terrorist Travel Prevention Act signed into law by...President Obama in 2015.

All that context was ignored by intelligence reporter New York Times in his “news analysis” for Sunday’s front page, “Visceral Fear, Dubious Cure.” The jump-page headline: “A Dubious Cure for Terrorism That Indulges Visceral Fear.” The text box: “Reassuring some Americans but at a high cost, both at home and abroad.”

Shane teed Trump up for condemnation:

Rarely does an executive order announce a more straightforward and laudable purpose than the one President Trump signed on Friday: “Protecting the Nation From Foreign Terrorist Entry Into the United States.” But the president’s directive is unlikely to significantly reduce the terrorist threat in the United States, which has been a minuscule part of the overall toll of violence since 2001.

2001 is the vital cut-off point -- if you want to downplay the risk of terrorism.

Many experts believe the order’s unintended consequences will make the threat worse.

While the order requires the Department of Homeland Security to issue a report within 180 days providing detailed statistics on foreign nationals who commit acts of violence, terrorism researchers have already produced rich and revealing data. For instance, since the terrorist attacks of Sept. 11, 2001, no one has been killed in the United States in a terrorist attack by anyone who emigrated from or whose parents emigrated from Syria, Iraq, Iran, Libya, Somalia, Sudan and Yemen, the seven countries targeted in the order’s 120-day visa ban, according to Charles Kurzman, a sociology professor at the University of North Carolina.

Shane skipped the Somali-born refugee who attacked 11 people with his car and knife at Ohio State University in December, before being shot dead by police. Apparently if you don't die from your injuries, it's not actually a terror attack.

The Times misreported the “random quality to the list of countries,” and went to great leaps to downplay the terror threat to America. Shane’s shoddy reporting made it sound as if Trump had either pulled countries out of a hat, or skipped some to preserve his business interests:

There was a random quality to the list of countries: It excluded Saudi Arabia and Egypt, where the founders of Al Qaeda and many other jihadist groups have originated. Also excluded are Pakistan and Afghanistan, where persistent extremism and decades of war have produced militants who have occasionally reached the United States. Notably, perhaps, the list avoided Muslim countries where Mr. Trump has major business ventures.

Even the liberal “explainer” site Vox stumbled onto the truth that the NYT managed to avoid:

There’s no evidence that Trump’s decision was driven by business concerns. The seven nations the executive order applies to -- Iran, Iraq, Libya, Somalia, Sudan, Syria, and Yemen -- were already flagged by the Department of Homeland Security and the State Department as either official sponsors of terrorism or “countries of concern,” and singled out in a law Congress passed in 2015 meant to make it more difficult for people who’d passed through those countries to enter the United States.

Undaunted, Shane continued with liberal language about “disenfranchised Muslims,” as if Europe somehow shared responsibility for the terrorist attacks.

Nor did the list include the European countries where disenfranchised Muslim communities have become hotbeds of militancy, leading to major attacks in Paris and Brussels in the name of the Islamic State. Because no visas are required for travel by most European citizens to the United States, and because of the volume of tourism and business, restricting travel from Europe would have been far more difficult and consequential than banning it from only the seven countries named.

By Mr. Kurzman’s count, 123 people have been killed in the United States by Muslim terrorists since the 2001 attacks -- out of a total of more than 230,000 killings, by gang members, drug dealers, angry spouses, white supremacists, psychopaths, drunks and people of every description. So the order addresses, at most, one-1,870th of the problem of lethal violence in America. If the toll of Sept. 11 is included, jihadists still account for just over 1 percent of killings.

Notice that while liberals are “rational” about the terror threat, cowardly conservatives rely on “emotion and symbols.”

To the rational calculations of Mr. Kurzman, one might simply reply with the list of American cities where horrific jihadist attacks have occurred in recent years: Boston; San Bernardino, Calif.; and Orlando, Fla. -- place names that conjure up images of ghastly wounds, bullet-ridden bodies and frightened people running for cover....

In the political realm, where emotions and symbols hold sway, Mr. Trump’s order may reassure some Americans that they are safer from terrorism, and more generally, from concerns that Muslim immigrants may bring an alien culture....

The trouble with such reassurance, even if it is effective, is that it comes at a high cost, in the view of many experts on terrorism. That cost will be counted not just domestically but also abroad, where the United States relies on allies, including Muslim countries, for intelligence and other help against terrorism.

Liberals don’t seem to think much of Muslim capabilities for restraint:

At home as well, Mr. Benjamin said, the president’s order is likely to prove counterproductive. The jihadist threat in the United States has turned out to be largely homegrown, he said, and the order will encourage precisely the resentments and anxieties on the part of Muslims that fuel, in rare cases, support for the ideology of the Islamic State or Al Qaeda.

“It sends an unmistakable message to the American Muslim community that they are facing discrimination and isolation,” Mr. Benjamin said. That, he said, will “feed the jihadist narrative” that the United States is at war with Islam, potentially encouraging a few more Muslims to plot violence.

Interesting that the media never warns that discrimination against Christians is likely to encourage Christians to engage in terrorism.