NYT: ‘Eerie Parallels' in Dystopian Books Like '1984' and Trump Presidency 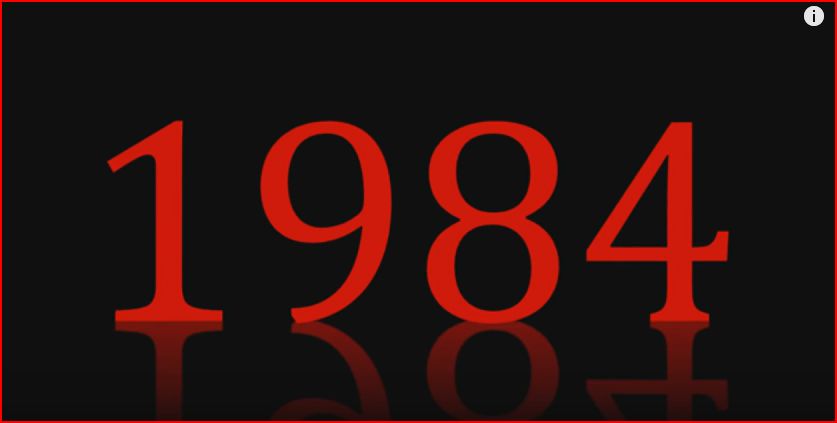 Hysterical liberals are rushing to buy dystopian novels like 1984 and The Handmaid's Tale, regarding them as playbooks for the new Trump administration, and the New York Times is eagerly validating their fears.

Kimiko de Freytas-Tamura reported Thursday that “George Orwell’s ‘1984’ Is Suddenly a Best-Seller.” The text box underlined the subtext: “A novel from 1949 about tyranny and the suppression of thought.”

George Orwell’s classic book “1984,” about a dystopian future where critical thought is suppressed under a totalitarian regime, has seen a surge in sales this month, rising to the top of the Amazon best-seller list in the United States and leading its publisher to have tens of thousands of new copies printed.

He said demand began to lift on Sunday, shortly after the interview Kellyanne Conway, an adviser to Donald J. Trump, gave on “Meet the Press.”

In defending a false claim by the White House press secretary, Sean Spicer, that Mr. Trump had attracted the “largest audience ever to witness an inauguration,” Ms. Conway used a turn of phrase that struck some observers as similar to the dystopian world of “1984.”

Just in case you didn’t get the point:

Penguin also published Sinclair Lewis’s “It Can’t Happen Here,” about the rise of a demagogue, last Friday in Britain for the first time since 1935, “and we’re already on to our third printing.”

The paper’s lead book critic Michiko Kakutani wrote a sequel for the front of Friday’s Arts section: “Why ‘1984’ Is a 2017 Must-Read.”

The dystopia described in George Orwell’s nearly 70-year-old novel “1984” suddenly feels all too familiar. A world in which Big Brother (or maybe the National Security Agency) is always listening in, and high-tech devices can eavesdrop in people’s homes. (Hey, Alexa, what’s up?) A world of endless war, where fear and hate are drummed up against foreigners, and movies show boatloads of refugees dying at sea. A world in which the government insists that reality is not “something objective, external, existing in its own right” -- but rather, “whatever the Party holds to be truth is truth.”

“1984” shot to No. 1 on Amazon’s best-seller list this week, after Kellyanne Conway, an adviser to President Trump, described demonstrable falsehoods told by the White House press secretary Sean Spicer -- regarding the size of inaugural crowds -- as “alternative facts.” It was a phrase chillingly reminiscent, for many readers, of the Ministry of Truth’s efforts in “1984” at “reality control.”

As the novel’s hero, Winston Smith, sees it, the Party “told you to reject the evidence of your eyes and ears,” and he vows, early in the book, to defend “the obvious” and “the true”: “The solid world exists, its laws do not change. Stones are hard, water is wet, objects unsupported fall toward the earth’s center.” Freedom, he reminds himself, “is the freedom to say that two plus two make four,” even though the Party will force him to agree that “TWO AND TWO MAKE FIVE” -- not unlike the way Mr. Spicer tried to insist that Mr. Trump’s inauguration crowd was “the largest audience to ever witness an inauguration,” despite data and photographs to the contrary.

Kakutani piled on more titles while playing both the Hitler and Stalin card:

Another book, published two years after “1984,” also made Amazon’s list of top 100 best sellers this week: Hannah Arendt’s “The Origins of Totalitarianism” (1951). A kind of nonfiction bookend to “1984,” the hefty philosophical volume examines the factors that fueled the perfect storm of events leading to the rise of Hitler and Stalin....

Alexandra Alter completed the fear-mongering trilogy with “Fears for the Future Prompt A Boon for Dystopian Classics” on the front of Saturday’s Business section. Like many sequels, this one may have been one too many: Alter found yet another recent spike in sales for a dystopian novel but somehow left out a vital caveat: The book, "The Handmaid’s Tale" by Margaret Atwood, which imagines the takeover of American by an ultra-fundamentalist Christian patriarchy, is being made into a show on Hulu this year (and publicized by the Times). It's been in the pipeline since at least April of last year, when few were taking the prospect of a Trump presidency seriously.

Last weekend, as hundreds of thousands of women gathered in Washington to protest the inauguration of President Trump, the novelist Margaret Atwood began getting a string of notifications on Twitter and Facebook. People were sending her images of protesters with signs that referenced her dystopian novel “The Handmaid’s Tale.”

“Make Margaret Atwood Fiction Again!” one sign read. “The Handmaid’s Tale is NOT an Instruction Manual!” read another.

“There were a honking huge number of them,” Ms. Atwood said.

“The Handmaid’s Tale,” which takes place in near-future New England as a totalitarian regime has taken power and stripped women of their civil rights, was published 32 years ago. But in recent months, Ms. Atwood has been hearing from anxious readers who see eerie parallels between the novel’s oppressive society and the current Republican administration’s policy goals of curtailing reproductive rights.

In 2016, sales of the book, which is in its 52nd printing, were up 30 percent over the previous year. Ms. Atwood’s publisher has reprinted 100,000 copies in the last three months to meet a spike in demand after the election.

Publishers Weekly also wrote about the spike in sales, but keyed it to the upcoming show and skipped any mention of a supposed Trump bump:

The 1998 trade paper edition of The Handmaid’s Tale, Margaret Atwood’s novel of a near-future theocratic U.S. that subjugates women, is seeing strong sales in advance of the TV series debuting on Hulu in April.

Alter covered Orwell’s oeuvre, and then yet another labored comparison between dystopian novels and the current president.

To many observers, [Kellyanne Conway’s] comment evoked Orwell’s vision of a totalitarian society in which language becomes a political weapon and reality itself is defined by those in power. The remarks prompted a cascade of Twitter messages referencing Orwell and “1984....

The sudden prominence of such novels reflects a renewed public interest in decades-old works of speculative fiction as guides for understanding our current political moment. Readers who are grappling with a jolting shift in American politics, when easily verifiable facts are subject to debate and civil liberties and democratic norms feel fragile, are turning to dystopian novels for guidance and insight.