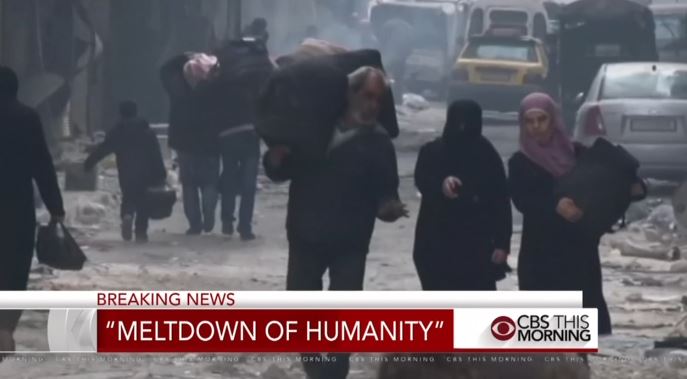 Top of the news: Our architecture critic weeps over Aleppo? Indeed, the front of Thursday’s New York Times featured a “Critics Notebook” from Michael Kimmelman, “Aleppo’s Faces Beckon to Us, To Little Avail.” The front-page included four tragic, famous photos of child victims of war to heighten the heart-wrenching.

Staggeringly, Kimmelman managed to lament the tragedy in Aleppo on the front page of a major newspaper, without a single mention of President Barack Obama, the sitting president for eight years and the architect of failed U.S. foreign policy. Yet president-elect Donald Trump, who has precisely zero to do with current Syrian policy, has two disparaging mentions.

They keep coming, both the bombs and the images from Aleppo, so many of them, the munitions raining indiscriminately on trapped families, aid workers and children. The Russian and Syrian government forces wouldn’t let them leave.

But the photographs and videos have made it out. The faces of the besieged, staring into the camera, at us, and at death, pleading for help, baffled by our indifference to the slaughter, describing the atrocities outside their bedrooms or just on the other side of the door. We see their faces from an angle we ordinarily see a friend’s face, up close, staring straight into our eyes. 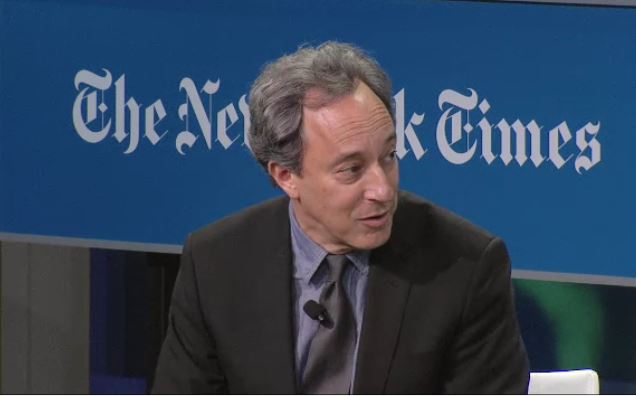 “Please, save us, thank you,” says Bana al-Abed, a 7-year-old Syrian girl, in one video posted to Twitter. Bana has been tweeting for a few months with her mother from eastern Aleppo, where Syrian government and Russian forces bombed her family out of their home. This week she said she knew she was going to die. It is hard for me to imagine anyone watching the video without feeling intense horror and shame.

Bana’s feed has prompted Western news outlets to fiddle over whether her tweets and videos are propaganda, whether Bana or her location can be authenticated.

And Aleppo continues to burn.

No, not right. Pictures of war and suffering have pricked the public conscience and provoked action before. There was Kevin Carter’s photograph from 1993 of a starving toddler and a vulture in Sudan. There was the photograph of the dead American soldier dragged through Mogadishu, which hastened the United States’ retreat from Somalia. There was Nick Ut’s 1972 photograph from South Vietnam of the naked 9-year-old Phan Thi Kim Phuc, screaming, burned by napalm. These pictures drove news cycles for weeks, months, years, helping tip the scales of policy.

Kimmelman made a passing glance toward realism, before quickly looking away and blaming Trump somehow, and his “playing to anti-Muslim bigotry.”

To be sure, the policy response was usually withdrawal. What might be done in a situation like Aleppo is not so linear. But that isn’t the whole story.

Does it matter that victims in Syria are Muslims? America’s president-elect won the election while playing to anti-Muslim bigotry. He sold himself to the American public as a transactional leader, promising deals, not necessarily decency. He said he admired Russia’s strongman president, Vladimir V. Putin, and campaigned on an isolationist retreat from global involvement.

Trump got name-checked in the proceeding paragraph as well.

We each turn to the news we like. During the Vietnam War, Americans watched the same network broadcasts and thumbed through the same magazine photographs. There was a draft. The war was in everyone’s home. Today a tiny percentage of Americans fight our battles. We watch desperate young strangers from faraway Aleppo from the comfort of a Facebook feed. The images and voices start to blur together. A tweet by President-elect Donald J. Trump or some scandal over fake news distracts us.

The national edition of the Times reads this way. “Half a million” killed in Aleppo? Really?

That’s because all images are Rorschach tests. Half a million people have been killed in Aleppo, millions displaced across Syria. Syrian, Iranian and Russian forces have laid waste to half the country, instigating a refugee crisis that threatens to unmake Europe and America.

Obama’s not to blame, only vague ‘Washington.”

But Washington shrugs. There have been no sanctions as there were over Russia’s annexation of Crimea. There turned out to be no red lines, even after chemical weapons killed and maimed hundreds, no marches on the Mall or big campus rallies. Russia and Syria bomb civilians with impunity.

And all we do is watch, helplessly, as Syrians refuse to go quietly, determined to get us to know them, their lives, all that has been lost.

Some of the public’s indifference can of course be chalked up to compassion fatigue and disillusionment with a war in its sixth year. Promises to end the conflict were broken over and over. There were assurances about popular uprisings. Social media today supercharges protest movements, which burn out almost as fast. Such movements used to require a slow, brick-by-brick construction. They didn’t rely on Facebook videos and Instagram photos.

Truth be told, no sane person wants to see these images anyway. What’s happening in Aleppo is almost unbearable to look at.

But that’s the point. Bana looks us straight in the eye and asks us to save her, please.

We have done nothing to help.

The very least we should do is look back.

Kimmelman doesn’t seem to know the Aleppo issue as well as he wants us to believe, given this whopper of a correction appended online:

An earlier version of this article overstated the death toll in Aleppo. While precise numbers are unavailable, tens of thousands have been killed in Aleppo, not “half a million.” (That is the estimated death toll for all of Syria since the war began.)

The New York Times is rather selective in its outrage over atrocities and the moral duty of America’s and the world’s to respond. If America has a Republican president, intervention means an unjust and illegal war in the Middle East. If a Democrat is in office, intervention means a humanitarian mission, and there is anguish over “compassion fatigue” among voters, as the Times lamented during Obama’s war over Libya. Usually there is no actual blame (sometimes not even a mention) of the president for the consequences of his own foreign policy.