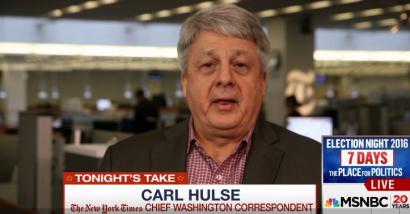 Congressional reporter Carl Hulse’s “On Washington” column, demonstrated Hulse’s eternal optimism on behalf of the Democratic Party. Even after a breathtaking setback on all levels just three weeks ago, Hulse has quickly switched back into his typical pro-Dem wishful thinking for Thursday’s “Democrats See Medicare as Winning Wedge Issue.”

He’s written this article hundreds of times, focusing on some issue -- or more likely non-issue -- that will guarantee Democrats a permanent victory and drive Republicans down.

Republicans are talking about messing with Medicare again, and Democrats couldn’t be more enthusiastic.

After an election that has thrown them back on their heels, they are grasping at the politics of Medicare as a path to potential revival in 2018.

Since 1995 -- when the newly installed speaker, Newt Gingrich, famously proposed $270 billion in cuts to Medicare and declared the program would “wither on the vine” because of the appeal of Republican-crafted free-market options -- Democrats have seen the exceedingly popular but financially strained program as a winning wedge issue.

They aren’t the only ones; Republicans have some telling experience of their own.

During the 2010 midterm elections, what vaulted Republicans to control of the House was one of their most potent attacks on the new health care law: that the new federal coverage would undermine Medicare. The demand by a South Carolinian at a town hall-style meeting that Congress should “keep your government hands off my Medicare” was one of the most famous, if unintentionally humorous, comments of the summer of angry debate.

Medicare has clearly paid out political benefits to both sides.

Now Democrats intend to capitalize on it again, beginning with their approach to the nomination of Representative Tom Price, Republican of Georgia, to lead the Department of Health and Human Services.

Mr. Price is not only a leading proponent of repealing the Obama-era health care law, but he has embraced Republican efforts to move future Medicare users into private insurance programs and raise the eligibility age. He told reporters shortly after the Nov. 8 election that he anticipated Republicans would embark on a substantial Medicare overhaul within the first six to eight months of Donald J. Trump’s presidency.

“Good luck to selling that to the voters in Indiana and Ohio that were Democrats and voted for Trump this time,” Senator Sherrod Brown, Democrat of Ohio, said about a Medicare revamp. “They’re going to be fleeing quickly, right?”

A Medicare fight is also a potential political lifeline for Democrats in red states who could be in very tough contests in 2018. Ten Senate Democrats face re-election in states carried by Mr. Trump. One of them, Joe Donnelly of Indiana, has already made it clear that he will brook no overhaul of Medicare and that he intends to vote against Mr. Price’s nomination to the health care agency.

Republicans say that significant changes are needed to keep the program financially viable and make it more efficient, stressing that any changes would not impact those who are currently enrolled. They also say that voters are tired of Democratic “Medi-scare” tactics and can see through them (though Republicans employ them as well.)

Still, as Democrats’ warnings of an assault on Medicare have intensified, Republicans have grown quieter about their plans for the program in 2017, brushing off questions about their intentions.

As they move forward with their health care realignment, the question for Republicans will be whether they are willing to fundamentally alter Medicare. If they are, Democrats will be waiting with enthusiasm.

Republican doom coupled with Democratic optimism is a perennial topic for Hulse.

Last March Hulse damned with faint praise Republican majority leader and Democrat “antagonist” Sen. Mitch McConnell, characterizing McConnell as “so crafty” while loosely wondering “what’s in his head?” as “far right politicians” praised him for his stance on blocking Obama's Supreme Court nominee Merrick Garland. That led Hulse to his favorite theme: Republicans losing elections, as McConnell’s conservative stance may mean “Senate Republicans could pay a big price in November and beyond.”

In February 2015, Hulse with Ashley Parker wrote on how the GOP-led Congress would harm the party's reputation before the 2016 elections: “It is a risky moment for the new congressional majority. A nasty partisan impasse over funding for a vital agency would probably damage the party’s brand just months after Republicans took power, and the impact could carry over into the next election cycle.”

The name of that agency that would surely wreck the Republicans in 2016? The Department of Homeland Security. Surely we all remember the great Republican wipeout in the DHS election of November 2016...right?