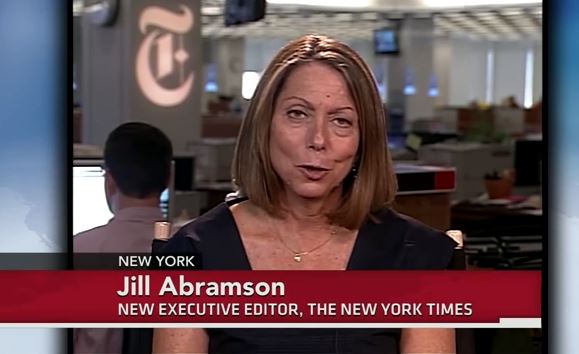 Former (and fired) New York Times executive editor Jill Abramson, now a regular columnist for the left-wing British newspaper The Guardian, hypocritically dismissed three women who have accused Bill Clinton of sexual misconduct in “Did the Hillary Clinton intimidate Bill's accusers? Let's look at the evidence.” The subhead: “Trump has tried to distract attention from his misogyny by throwing the spotlight on Jones, Willey and Broaddrick. It’s a dishonest and devious tactic.”

(To review: Juanita Broaddrick claimed then-Attorney General Bill Clinton raped her in a Little Rock hotel room in 1978, while Kathleen Willey claims President Clinton assaulted her in the Oval Office. Paula Jones alleges Clinton exposed himself to her in a hotel room while governor of Arkansas. Donald Trump held a press conference featuring the women before his debate with Hillary Clinton last Sunday.)

Abramson’s dismissal of sexual harassment charges against political figures is particularly hypocritical from the woman who co-wrote “Strange Justice,” a smear job on Justice Clarence Thomas that sided with his accuser, Anita Hill. Abramson hailed Hill as a heroine for testifying against Thomas in a Guardian column tied to a fawning HBO special: “HBO's Confirmation shows how women were treated in Washington. Has anything changed?” In that same piece she called both Anita Hill and Hillary “feminist icons” and cast them as victims of the white male establishment and the “Republican attack machine.”

But her tone towards women who accuse powerful men of sexual harassment changes is drastically different when it’s Democratic statesman Bill Clinton under fire:

It’s hard to say which was worse, the appetizer or the main course.

I’m talking, of course, about the second presidential debate and its prelude, that bizarre tableau of Donald Trump flanked by the Clintons’ female accusers. It was meant to distract voters from the killer tape of Trump’s unspeakable misogyny and to distract Hillary Clinton. So far, it doesn’t seem to have worked.

These casual and pernicious comparisons have been endlessly recycled and loudly echoed in what my friend, the journalist Robert Parry, has called the mighty wurlitzer of rightwing talk shows and social media.

I’ve previously reported in the Guardian that Paula Jones, Kathleen Willey and Juanita Broaddrick were cheerleaders for Trump long before their canned, pre-debate endorsements of him, which, watched with bad sound on Facebook Live, resembled a Soviet show trial....

She tried to weasel away by saying: “I am not judging the underlying accusations against Bill Clinton by the women, just Trump’s insistence that Hillary Clinton has enabled and covered up her husband’s sexual misconduct.”

After asserting Kathleen Willey had no evidence tying the Clintons to her personal harassment, she smeared Willey by association.

Nonetheless, she’s a convenient weapon for Trump because of her ties to the alt-right....These activities don’t mean she’s lying, and her supporters complain the leftwing media won’t cover her. But they do show she’s pretty deep in with Trumpworld.

Juanita Broaddrick says Bill Clinton raped her when she was a volunteer in his Arkansas campaign. She interprets a brief encounter with Hillary Clinton 38 years ago at a state political event as an attempt to silence her. Their conversation, which Broaddrick says left her in shock, took place soon after the alleged rape. Here’s what she told the Drudge Report in an interview in 1999:

“She came directly to me as soon as she hit the door … She caught me and took my hand and said: ‘I am so happy to meet you. I want you to know that we appreciate everything you do for Bill.’”

Broaddrick says she found these comments “scary”, especially after Hillary repeated them a second time when her “smile faded on the second thank you”. The former nursing home worker said she was “in state of shock ... nausea went all over me”.

It takes a lot of reading between the lines to interpret these words as a threat to stay quiet. It also assumes that Hillary Clinton knew about what her husband allegedly did to Broaddrick, something she has denied about his womanizing generally until he confessed to his affair with Monica Lewinsky.

Again, the Times asks us to believe that the smartest woman in the world had no idea her horndog husband was cheating on her.

Seriously, this is the bill of particulars that prove Hillary Clinton’s “horrible mistreatment” of the three women.

Finally Abramson suggested that maybe, just maybe, Hillary Clinton was being a little hypocritical but then managed to turn the tables back on to Republicans.

Looking back, Clinton herself may have helped lure these women on to the 2016 campaign stage by tweeting last fall that every victim of sexual assault or harassment deserved to be believed.

That tweet represents the prevailing view these days, but not in the 1990s, when this history unfolded. (Think Anita Hill.)

The assumption of truth-telling should extend to Jill Harth, whose allegations of sexual assault against Trump in 1993 were detailed in the Guardian in July. Trump has denied the charges.

Abramson ended on a surprising admission, delivered in a shrugging tone.

But that isn’t the equivalent of wrongdoing by his wife.

Andrew Ferguson at the Weekly Standard rounded up examples from Hillary-admiring journalists who nonetheless documented her fierce attempts to discredit and smear her husband’s sexual accusers -- none of which Abramson seems to be aware of.

Abramson is reliably in Hillary’s corner. In a Guardian column from March, Abramson forgot a quarter-center of lies to claim “This may shock you: Hillary Clinton is fundamentally honest.”