New York Times culture reporter Dave Itzkoff wrote a supportive article about an anti-Trump rant of TBS Full Frontal host and leftist scold Samantha Bee for attacking a fellow late-night comedian for the crime of being playful with one of his guests, Donald Trump.

As Itzkoff noted in his story, “From One Comedic Host to Another: Criticism Over Trump,” on the front of Wednesday’s Arts section, Bee was enraged at Tonight Show host Fallon (and his network NBC) for failing to treat Trump as the second coming of Hitler. Judging by the controversy, there are many on the left who evidently take the words and acts of talk show hosts very seriously indeed. (Fallon treated Michelle Obama in kidding fashion as well, without any liberal hand-wringing.)

Monday was in many ways typical for the late-night comedy shows, with network hosts like CBS’s Stephen Colbert and NBC’s Seth Meyers performing pointed satirical monologues about Donald J. Trump, the Republican presidential nominee, and his many years spent propagating lies about President Obama’s birthplace. 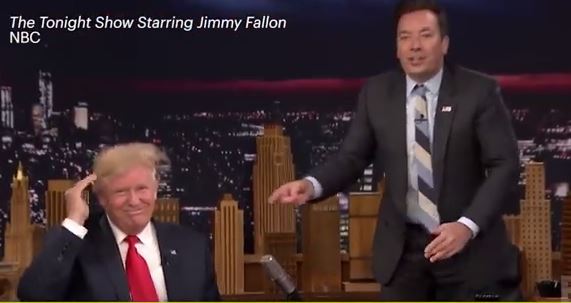 But Samantha Bee, on her TBS cable series, “Full Frontal,” took aim at a different target, condemning the NBC network and its late-night host Jimmy Fallon for putting Mr. Trump on “The Tonight Show.” She faulted Mr. Fallon for conducting a genial, hair-mussing interview on Thursday, even as Mr. Trump had refused that day in other interviews to acknowledge that Mr. Obama was born in the United States.

“Network execs, and a lot of their audience, can ignore how very dangerous Trump is because to them, he isn’t,” Ms. Bee said on her show. “They’re not going to be deported. They’re not going to live under a president who thinks of them as a collection of sex toys.

“They’re not racist. They just don’t mind if other people are, which is just as bad.”

It’s one thing to make fun of Mr. Trump, who said on Friday that Mr. Obama “was born in the United States, period.”

It’s another to criticize a network or Mr. Fallon, who is typically not held up to such scrutiny, partly because of his amiable on-air personality and the perception that his “Tonight Show” (which draws more than three million viewers a night, the most in its category) is a place for nonpartisan diversions. He and rival hosts like Mr. Colbert and Jimmy Kimmel try to avoid criticizing one another in public.

But Mr. Fallon took plenty of criticism for the Thursday interview, and Ms. Bee’s monologue was perhaps the bluntest denunciation of it so far.

On a day in which Mr. Trump continued to give ambiguous answers on whether he still supported his false birtherist theory, Mr. Fallon asked him mostly uncontroversial questions and playfully ran his fingers through Mr. Trump’s hair.

Jo Miller, an executive producer of “Full Frontal,” said in an interview on Tuesday that seeing the cozy behavior between Mr. Fallon and Mr. Trump “was a punch in the gut....If he thinks that a race-baiting demagogue is O.K., that gives permission to millions of Americans to also think that.”

Who knew a late-night comedy talk show came with so much social responsibility!

Echoing Ms. Bee’s monologue, Ms. Miller said that Mr. Fallon did not deserve all the blame, and that NBC was more culpable for providing Mr. Trump a platform as the star of its reality shows “The Apprentice” and “The Celebrity Apprentice.”

Ms. Miller pointed out that there is still an awkward relationship between Mr. Trump and NBC, where the “Today” show host Matt Lauer was criticized for going too easy on him in a prime-time presidential forum, and Mr. Trump has expressed pre-emptive skepticism of the NBC “Nightly News” anchor Lester Holt, who will moderate the first presidential debate.

Apparently Fallon has learned his lesson -- never treat a Republican like a human being:

On Monday night, meanwhile, Mr. Fallon’s “Tonight Show” guests included Hillary Clinton, the Democratic presidential nominee. Going through items that they said belonged to Mr. Trump, Ms. Clinton offered Mr. Fallon something that she said Mr. Trump had left behind for him: a bag of softballs.

Mr. Fallon responded, “That was my gift to him.”

Last year Itzkoff levied an odd liberal criticism against comedian Jerry Seinfeld for calling the younger generation too sensitive and politically correct for comedy: “(Perhaps some of [comedian Colin] Quinn’s working-class bona fides will rub off on Mr. Seinfeld, whose recent remarks on political correctness have seen his man-of-the-people status called into question.”