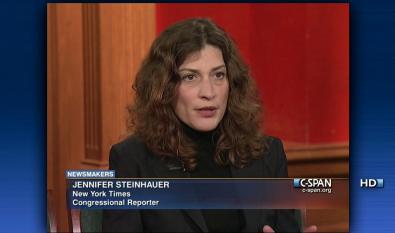 New York Times Jennifer Steinhauer’s “Congressional Memo” was the lead National section story in Wednesday’s edition, dripping with her trademark sneering condescension toward conservatives in Congress for not caving in to the Democrats on their issues: “A G.O.P. Fear In the House: Cooperation After Nov. 8.”

A big conspiracy theory in Washington these days, perhaps second only to the one concerning Hillary Clinton’s supposed body double, is the fear among some House Republicans of what President Obama and their party leaders might cook up during a lame-duck session of Congress after Election Day.

They dread sudden approval of the Trans-Pacific Partnership. They worry about a sweeping bill that would fully fund the federal government. Some even fret that Judge Merrick B. Garland could be confirmed to the Supreme Court.

In short, they fear Congress functioning in a conventional, bipartisan way.

So some more conservative House Republicans are pushing for a long-term spending bill -- one that could very likely work against their interests next year -- to avoid returning to Washington in late November.

“In lame ducks, all the rules seem to get muddled,” said Representative Paul Gosar of Arizona, a Republican who counts himself among the lame-duck loathers. “Legacy items run to the front of the line.”

The angst is not without merit. Serious legislation and political altercations have occurred in the 19 lame-duck sessions held by Congress since 1940, including the censure of Senator Joseph R. McCarthy; a gas tax increase; a huge and contentious land preservation measure; and, in 2010, a vote to overturn a 17-year ban on gays and lesbians serving openly in the military.

But the panic among Republicans that they will be betrayed by their party also demonstrates a profound gulf of trust between many rank-and-file members and congressional leaders that has fermented over the last six years, as well as a frustration that their party has been unable to curtail the power of the executive branch.

Members of the hard-right Freedom Caucus, who are pushing for a spending bill that goes beyond Dec. 9, are trying hard to make their case to Paul D. Ryan of Wisconsin, the House speaker, even as their arguments lay bare their distrust of his promises.

But barring their own plan for a long-term deal, House Republicans want something in return. “Let’s get something for it,” said Representative Jeff Duncan, Republican of South Carolina, who mentioned a policy provision he would like attached to a bill that would halt the Obama administration’s Syrian refugee program and said he was seeking support from the Senate on a possible impeachment of John Koskinen, the commissioner of the Internal Revenue Service.

When Steinhauer wasn’t using slanted labels, she let sympathetic Democrats in Congress do it for her.

It’s far from the first time Steinhauer has attacked conservatives with personal attacks and hostile labeling. She previously went after Sen. Ted Cruz in personal terms. In May she undertook a subtle sneak attack on conservative senators, saying Republicans can become “thoughtful” and “senatorial” in her eyes by calling for government spending or gun control.

And last October, during the Republican fight for the House speakership, she lamented a victory by “the clutch of unyielding hard-line conservatives who toppled the ambitions of yet another member of the party leadership.”