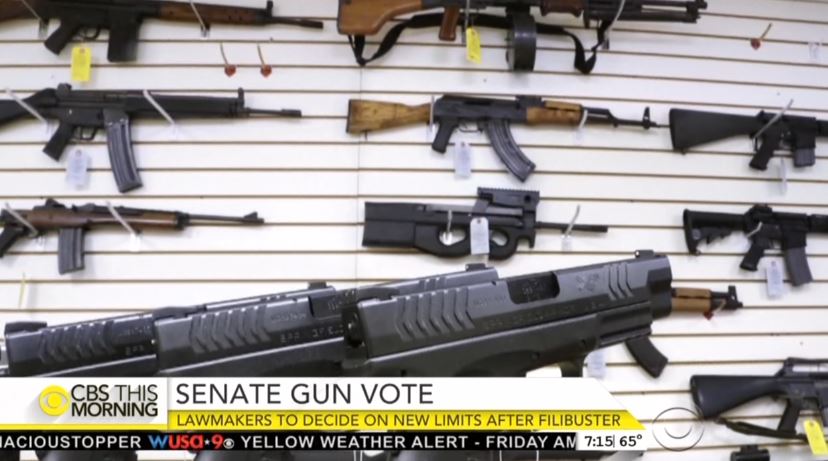 New York Times reporters Sheryl Gay Stolberg and Jennifer Steinhauer lamented the doomed legislative prospects for various gun-control bills in stories on Tuesday, tossing journalistic objectivity aside while all but weeping with the families of previous gun massacre victims.

Stolberg’s profile piece, “Victims’ Families Watch as Gun Measures Stall,” was sodden with regret and bereft of balance. The text box: “A reunion to push for changes, but falling short once again.”

They are members of the Club Nobody Wants to Be a Part Of. And their numbers are growing.

So there was a sense of déjà vu here on Monday as the Senate rejected four gun safety measures, one week after the Pulse nightclub massacre, which killed 49 and injured 53, in Orlando, Fla.

Mrs. Maisch had cut short a family reunion in St. Louis to be here for the vote. In 2013, when the Senate voted against gun safety measures that President Obama pushed for after the Sandy Hook shooting, she stood up in the Senate gallery, looked down at the lawmakers and shouted, “Shame on you!” She was escorted out by the police and detained for two hours.

On Monday, she wore an orange button that read “Survivor” and a collection of colored plastic wristbands, each one representing a shooting victim. One was for a congressional candidate from Wisconsin whose mother killed herself. One was for Jordan Davis, a 17-year-old student shot in Florida, by someone who complained about his loud music. One was for Dawn Hochsprung, Ms. Smegielski’s mother.

“These are all people I know,” she said.

Gun safety advocates said they were not aware of any survivors or relatives from Orlando here; it was simply too soon, they said. Lori Haas, whose daughter was badly injured at Virginia Tech, and who is now the Virginia state director of the Coalition to Stop Gun Violence, was in Orlando with family members on Monday.

Her presence there suggests a possible change after the rampage at Pulse, a gay nightclub. Leaders of the gay rights movement, which is well-organized and well-funded, are now putting their muscle behind gun safety.

Dan Gross, president of the Brady Campaign to Prevent Gun Violence, said gun safety advocates hope to pattern their efforts after the campaign to legalize same-sex marriage. If they cannot win in Washington, they will try to win in the states. They cite some progress: Since the Sandy Hook shooting, 42 states have passed some sort of gun safety legislation, according to the Law Center to Prevent Gun Violence....

Tina Meins, whose father was killed in San Bernardino, watched the vote from afar; she had been here last week to attend a news conference with Senator Christopher S. Murphy, a Connecticut Democrat who held a 15-hour filibuster intended to force his colleagues to take up the issue of guns.

She, like the others, expected the measures to fail. The life of a gun-safety advocate, she said, can be “extremely frustrating.” And the club is growing. “In San Bernardino, we had 14 families,” Ms. Meins said. “Now we have 49.”

The text itself wasn’t much more balanced:

The Senate on Monday failed to advance four separate measures aimed at curbing gun sales, the latest display of congressional inaction after a mass shooting....Partisanship and the power of the gun lobby played a large role in the amendments’ failure. Democrats structured their bills in a way that was almost certain to repel Republicans, while Republicans responded with bills equally distasteful to Democrats.

As my colleague Nicholas Fondacaro pointed out, there wasn’t a lot of hope for the measures, which were mostly symbolic, in the first place: “The votes were the result of a promise to Connecticut Senator Chris Murphy, who filibustered for 15 hours the previous week. Murphy’s proposal to close the mythical 'gun show loophole' was one of the measures voted down. In an appearance on ABC’s This Week reporter Jon Karl forced Murphy to admit that his proposal would not have stopped any recent mass shooting.”

More context that was only hinted at in Steinhauer's take: Gabriel Malor at The Federalist revealed how Democrats in Congress had sabotaged their own gun controls bill to help their re-election prospects.

On Monday evening, Senate Democrats put party over principle in rejecting common-sense, reasonable gun control measures. After the mass murder at Orlando gay club Pulse, Sen. Chris Murphy and his colleagues staged a flashy talk-a-thon in which they demanded that votes be taken on legislation strengthening gun control laws. The Senate Republicans agreed to the Democrats’ demand. Democrats got what they asked for, then blew it.

....all four gun control proposals were voted down because of the Democrats.

Rather than agree to the incremental gun control measures Republicans proposed, the Democrats chose to pass no gun control legislation at all. At some point after loudly demanding legislation for more than a week, Senate Democrats decided it would be better for their reelection prospects that no gun control bills pass the Senate during the election season. Their decision was hypocritical, unprincipled, and pure politics.