Fresh off condemning libertarian "freedom" rhetoric as racist, TV producer David Simon, creator of the acclaimed HBO series "The Wire" and others, talked to Marcelo Rochabrun of the non-profit "public interest" news outlet ProPublica about his new miniseries "Show Me a Hero," on the desegregation of Yonkers, NY in the mid-1980s, after a federal judge ordered public housing projects to be built in white, wealthy parts of town.

Simon lamented "the dynamic of hyper-segregation," then explained the term with the illiberal gesture of making insulting generalizations about an entire race, while praising an ultra-leftist screed on white racism. 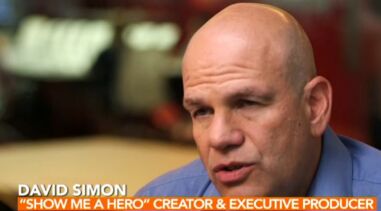 White people, by and large, are not very good at sharing physical space or power or many other kinds of social dynamics with significant numbers of people of color. It’s been documented time and time again. There is a great book by Andrew Hacker called “Two Nations.” My God, it’s almost a quarter century old, but it is an incredible primer on just how specific the desire of white America is to remain in a hyper-majority.

Hacker's 1992 book, summarized by Publishers Weekly, is indeed a liberal screed blaming white racism for street violence and drug use by blacks: "Hacker... exposes white racism in politics, employment practices and education and the public's perception of crime and welfare. Turning to blacks' "self-inflicted genocide'' through drugs and street violence, he argues that white America shares a large measure of responsibility for this situation because it has fostered a racial chasm--a divide that seems likely to persist unless drastic steps are taken."

The reason we wanted [reporter Lisa Belkin’s] book was that Yonkers was a place where the housing department actually got the housing right. They didn’t overwhelm the neighborhood with a massive project or hundreds of walk-up units. They were trying to do scattered-site housing for the first time, which has been this quiet revolution in public housing. It works, it doesn’t destabilize neighborhoods. But you were dealing with people who were entrenched behind the same fears as previous generations….

This project kept getting bumped a little bit to the back burner but every time we bumped it, in talking about it with the HBO executives, we’d say, “You know what, look, it just happened to Baltimore.” They tried to do the same thing with scattered housing in eastern Baltimore County, and the white folks went batshit, batshit crazy. At every point, there was a new fresh example that the dynamic was still there, that the racial pathology was still intact. And I think it has only become more pronounced. The show was greenlit before Ferguson, before Baltimore, before Charleston.

Simon blamed the stalling of "desegregation" after the Yonkers tumult on an underfunded Justice Department because of (three guesses) Ronald Reagan.

Because of how blistering Yonkers was, how insanely volatile and irrational Yonkers was. You have to remember that this case was brought at the end of the Carter administration. There wasn’t a single civil rights action filed by the Justice Department from 1980 to 1988 that mattered. Reagan effectively shut down the civil rights division of the DOJ. Then you had Clinton, who was doing everything he could during the Gingrich years to maneuver to the center. The reason you didn’t have aggressive use of this legal precedent under Clinton is the same reason you have those omnibus crime bills that filled up prisons as fast as we can construct them. Bill Clinton’s triangulation with the political center made things like fair housing prohibitive for his political priorities.

Asked if he had heard from residents during filming, Simon mentioned encounters with that dreaded libertarian rhetoric freedom and liberty that he had previously condemned as racial code.

....But every time we set up and started filming, people would come over, and we talked to people who were unrelenting in their belief that what was done was illegal and that the judge had no right to do this and that it was an affront to their freedom and their liberty. They would come and tell us that, and we’d say “well, okay…”

The conversation took a conspiratorial turn when Simon argued that even the New Deal's housing was built with racism in mind to keep minorities segregated. Conservatives can certainly agree that packing poor people into expensive government funded high-rises was ill-advised, but to call it a racist conspiracy to excuse the abysmal failure of the project?

Simon concluded that anyone who would dare accuse judges of "social engineering" as a racist.

I certainly don’t want to tell people what to watch until they watch it. Just that we were very true to the history. This is all predicated upon a 40-year history of American government at the federal, state and local level using public money to purposefully hyper-segregate our society. Poor people didn’t end up all packed into housing projects in one square mile of Yonkers by accident. It was a plan. It was a plan in Chicago, in Baltimore, in Dallas and everywhere that took federal housing money since the 1930s.

The records, the history of it is in plain sight. I have nothing but contempt for anybody who says that [the racial integration of Yonkers] was social engineering by this judge. Really? You want to parse it that way? What bullshit. The social engineering begins in the 1930s, with FHA mortgages and with the first public housing monies in the New Deal. Republicans and Democrats are both complicit.

The idea that the social engineering starts at the moment that somebody might want to restore somebody to their full civil rights, 40 years into the rigged game. And that’s when you object? Sorry, that’s racist to begin your argument there.

Strange that Simon, after excoriating the racist origins of the federal government's housing administration program (more on that here), can somehow bash libertarians for disrespecting the very New Deal that birthed that housing program in the first place, while embracing even more involvement from that same federal government that ruined things the first time.