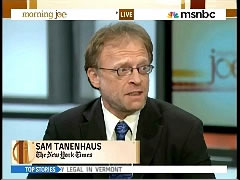 The tone of these Slate debates is usually civilly contentious, but in his Thursday afternoon posting, Tanenhaus leaves his lofty chambers of rhetoric to insult the conservatives he purports to be an expert on with a well-known lefty vulgarism:

Even today the right insists it is driven by ideas, even if the leading thinkers are now Limbaugh and Beck, and the shock troops are tea-baggers and anti-tax demonstrators.

In other words, the movement has thrived not as a top-down operation, nor as a bottom-up one, but as a convergence of shared prejudices and cultural enmities. Thus, the right's first great modern tribune was Joe McCarthy, whose theatrical "investigations" of "enemies within" were either endorsed or indulged by each of the intellectuals mentioned above.

As an editor with a wide field (both literature and politics), does Tanenhaus really not know the vulgar origin of the phrase "tea-baggers"?

I reviewed Tanenhaus's slim essay of a book last month on Times Watch, finding it intellectually misleading (any book where Obama is some kind of heir to the conservative tradition is suspect). I concluded:

Tanenhaus is fudging facts to portray the political landscape in a liberal-friendly manner. But the real world has shifted underneath him in the last few months, leaving Tanenhaus's elaborate painting looking more like a twisted Picasso than a realistic view of U.S. politics.

In one oft-quoted image from the book, Tanenhaus likens today's conservative movement to "the exhumed figures of Pompeii, trapped in postures of frozen flight, clenched in the rigor mortis of a defunct ideology." It's a striking image, but as dated as the rest of the book, which is itself frozen in time, a fossil of conventional wisdom that can be carbon-dated precisely to Obama's brief period of ascendancy, circa early-to-middle 2009.