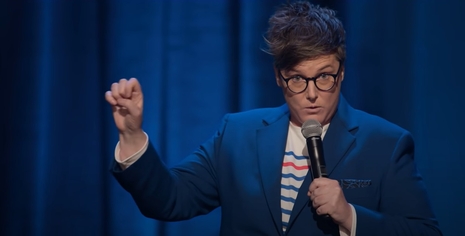 When historians reflect on the current state of free speech in America they’ll come away with two distinct impressions.

That’s never more true than when it comes to comedy. Mainstream journalists alternately empower Cancel Culture or question its existence.

They tag-team against comics like Ricky Gervais, Dave Chappelle and others who defy the Cancel Culture scolds or simply follow the funny wherever it leads.

The tells are obvious. Journalists either put scare quotes around the term Cancel Culture, or they preface it by “so-called.”

The real proof is in the reportage, and USA Today offers a prime example.

The liberal outlet published a series on comedy in the modern age. The funniest part? One segment explores the role of “stereotypes” in comedy, but the overall project smacks of progressive stereotypes tied to modern humor.

The article summing up the series is typical of the approach.

“To keep with the times and celebrate more voices, of course, (comedy) has to be updated,” author and comedian Phoebe Robinson tells USA TODAY. Although there are “great foundational aspects to comedy,” she says, it’s important to “not rely on what worked before and push the genre further.”

Yes, let’s dismiss the groundbreaking work by Richard Pryor, George Carlin and Lenny Bruce for the wit and wisdom of Phoebe Robinson.

Instead, let’s look to Hannah Gadsby and fellow woke comedians, the kind who deliver TED Talks that rarely deliver laughs.

USA Today did some investigative digging into the topic – “We talked to dozens of comedians and industry experts to find out where comedy is today.”

Not one voice vehemently disagreed with the newspaper’s thesis, though. Odd.

We do get canned quotes from Rowan Atkinson railing against Cancel Culture and acknowledging that comedy always has a target. And Shane Gillis, fired from “Saturday Night Live” for offensive Asian jokes, is quoted, too.

That’s as much balance as USA Today can offer. In its place, we learn that comedy must “evolve.”

We never hear how today’s comedians treat the Biden administration with care, avoiding hard jokes against it until the media gives them the “all-clear” sign. Nor does it mention that cruel comedy is perfectly acceptable if the targets are on the Right.

That’s speaking “Truth to Power,” as our biased press sees it.

Journalism’s credibility is in free fall, and for very good reason. Series like the USA Today comedy showcase hardly help.