Mention Mel Brooks in a crowd and you’re bound to get one of two reactions.

Some will start reciting classic lines from his films, such as …

Or, they’ll lament how the current culture warriors wouldn’t allow Brooks’ Blazing Saddles to be made today. Both point to Brooks’ enduring spirt, gut-busting humor and willingness to go wherever the laughter leads.

The comedy legend turns 95 this week, as good an occasion as any to celebrate his comic legacy. He’s still going strong, too, giving interviews and yukking it up whenever a camera comes near.

Tyrannical Big Tech companies make it even harder to flout the aforementioned rules. It’s a miracle Brooks hasn’t been canceled yet.

He hasn’t for several good reasons. The woke mob occasionally grandfathers in select comedians. Don Rickles passed away in 2017, but the early woke mob left him alone. It’s possible a similar sentiment prevents them from doing the same to Brooks.

It helps that he repeatedly warns he couldn’t make Blazing Saddles, a dizzying attacking on racism, in today’s climate. Brooks doesn’t call out the woke mob by name in these statements, but we all know what he means.

He’s spoken eloquently on the matter of free speech and comedy. Few address the subject with the authority he brings to the matter.

“Well, for me, they’re a little too strict about, you know, what’s in bad taste and what’s in good taste,” said Brooks. “I mean, m**********r, the MF word, it’s purposeful, it has grit. It has truth, truth and grit. And you can’t shower people with truth and grit if you’re gonna be careful about stepping out of the lines. You gotta step outside the lines. And I think that the political correctness is too, I’m sorry to say it, is too politically correct.”

The legend has another ace up his sleeve to avoid the PC police. He’s joyful, upbeat and kind, even when he’s telling a randy joke. That spirit pervades his work and his public persona. He’s the avuncular neighbor you never want to leave, the guy without a hint of malice in his heart. 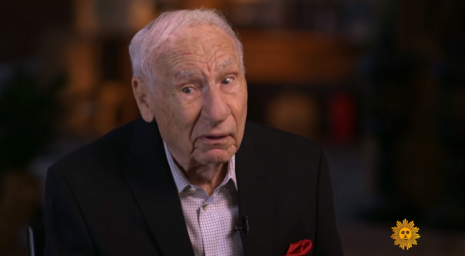 That used to be the norm in comedy circles, with edgier stand-ups like Richard Pryor and George Carlin left to throw the sharper elbows.

Today, too many comedians lead with their fists. Think Stephen Colbert, Samantha Bee and Jimmy Kimmel. Their often nasty to those who don’t think like them. Alec Baldwin’s Trump impersonation always reminded you how much the show, and more directly the actor, loathed the 45th president.

Brooks showed a rare flash of public anger last year when he supported Joe Biden during last year’s presidential campaign. The video still had a puckish sense, a far cry from the nastier broadsides against then-President Trump.

Today’s culture could use a new comedy in the Young Frankenstein or The Producers mold. We all desperately need a laugh, the kind that brings both sides of the ideological aisle together. We crave a comic soul like Brooks even more so, someone who puts a smile on our faces to match his own.