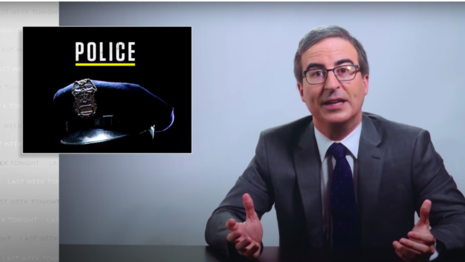 The late night hosts are well compensated for their work, allowing them to live in neighborhoods where violent crime is something seen on their flat-panel TVs, not outside their windows.

If Meyers calls SE D.C. home, or Bee commutes from her Hell’s Kitchen walkup to the TBS studios, I stand corrected.

So it’s easy for them to side with the far-left protesters demanding we defund the police. How extreme is that position, beyond the bounds of common sense? Both Joe Biden and Bernie Sanders are saying, “not so fast…”

Not Team Late Night. They’re all in, to varying degrees.

HBO’s Last Week Tonight got a jump on the late night trend Sunday.

[Show host John] Oliver argued that taking some money from a police department’s budget, and using it to create more affordable housing, or to fund mental health services, would create a community safety net better suited to respond to situations such as someone having a mental health crisis in public, rather than an armed officer. The police could then focus on more serious crimes.

“The concept is that the role of the police can then significantly shrink because they are not responding to the homeless, or to mental health calls, or arresting children in schools, or really any other situation where the best solution is not someone showing up with a gun,” Oliver said. “That is the idea behind ‘defund the police,’ if you actually listen to it.”

If you have to explain a slogan like “Defund the Police,” it’s not doing the job. Plus, it’s lousy policy. It’s like saying by giving more money to addiction treatment centers will fix the horrors of addiction. Sadly, drug addicts often need multiple visits to centers like that before kicking their deadly habits.

Too many never do despite the centers’ best intentions.

The same holds true for mental health agencies. They do noble work, but they’re hardly are able to “fix” deeply disturbed souls. They help, but when they don’t we may need law enforcement to step in.

The same holds true, obviously, for crime. Giving a repeat offender affordable housing is no guarantee he or she will give up on crime. None. To say otherwise is absurd.

“Given the enormous harm being done to the black and brown communities, we can’t only keep responding with the same weak incremental tweaks,” Bee said. “George Floyd himself was killed in a city that has been called a shining star of police reform. Police reform hasn’t brought the change we need but there is something we can do: We can defund the police.”

Bee even shared a “Take Action” page where you can help make your communities even less safe sans cops.

Meyers’ ‘defund the police’ rant isn’t as overt as his comrades, but the disconnect from reality is even stronger.

“This proves once again that direct, mass action in the streets get results,” Meyers says, before showing a video of the police using force against protesters.

Naturally, the clip is selectively edited. What happened prior to this moment? More importantly, has Meyers not seen the violence, the mayhem, the fires, the shattered businesses and other chaos from the protests? Police are being assaulted nationwide on a mass scale, and the restraint they’ve shown is admirable.

He says there are “countless videos” of heavily armed cops attacking protesters. Really? Did they throw bricks and stones and Molotov cocktails first? Seems an important detail Meyers leaves out.

Could he really think we’re this dumb? There’s gaslighting, and then there’s “Late Night with Seth Meyers.”

Next, he uses a ridiculous analogy to call for defunding the cops.

“One bad flight? ‘Maybe we can make air travel better.’ But if every flight ends up in the Hudson River you might think, ‘it’s time to defund Spirit Airlines,'” Meyers says.

Next, he chastises Fox News’ Tucker Carlson who actually has a reporter on the ground in Seattle to cover what Meyers is ignoring.

Tucker, you think the left wants to replace the police with a “Woke militia” in your warped mind, what do you even imagine this “Woke militia” would look like? Antifa skate teens patrolling the streets in their Hamilton t-shirts, forgiving everyone’s student loans and forcing them to use their free government healthcare “I’m sorry, sir, I have no choice but to detain you and bring you to the hospital to get your rash checked out, free of charge.” And then, jump on the back of my board.”

Actually, the new “warlord” of Seattle has an AK-47, and the “peaceful” protests Meyers praises aren’t quite … accurate. Here’s just one snapshot of these mostly peaceful gatherings in Seattle, Wash.

“Hoping to break through the barricade, protesters attacked officers with bricks, bottles, rocks, and improvised explosive devices, sending some officers to the hospital. At the same time, activists circulated videos of the conflict and accused the police of brutality, demanding that the city cease using teargas and other anti-riot techniques.”

That’s been the media narrative for days, even when it reached levels of absurdity Lt. Frank Drebin might cheer.

All of this ignores another fact. Some radical leftists are literally saying they don’t want police knocking on their doors, or yours, despite the Late Night SpinTM.

That’s something our “truth-telling” comedians might consider as they scribble down next monologues.