Here’s Why the Liberal Media Fear the Babylon Bee 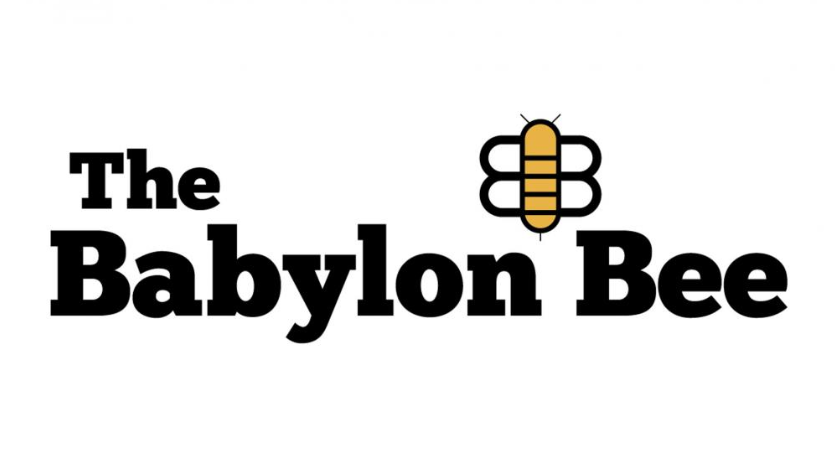 That’s obvious in the Age of Trump, but it also held true during President Barack Obama’s two terms in office. SNL player Jay Pharoah said the show “gave up on the Obama thing.” The few times the show mocked Obama’s policies the media took notice.

Guess what happened next?

Both CNN and The Washington Post fact-checked skits that dinged Team Obama. The latter, which declares “Democracy Dies in Darkness,” later defended the out-of-left-field fact check.

Has any anti-Trump sketch faced a similar examination?

Progressives take their partisan comedy seriously. It helps that they have a stranglehold on the comedy landscape. When David Spade announced he wouldn’t attack President Donald Trump it made headlines.

Which brings us to The Babylon Bee.

For the uninitiated, the Bee serves up Christian satire with a heaping helping of political humor. Yes, the site often pokes fun at President Trump.

That’s what any respectable humor outlet would do, no matter who’s in the Oval Office. It’s also what comedians did prior to Obama’s election.

What the Bee produces that few, if any, comedy institutions attempt are stories that tweak the Left, often sans mercy. The below example speaks for itself. 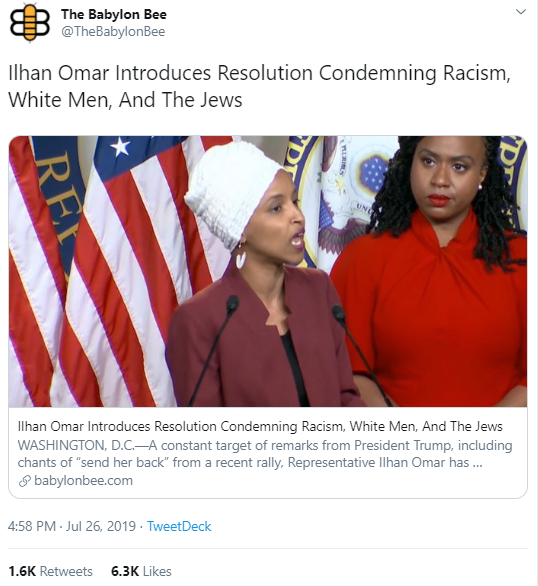 Can you imagine Stephen Colbert uncorking the aforementioned bits? Not even David Lynch’s imagination stretches that far.

Which brings us to Snopes. The fact-checking site is tacking to the left of late, following the depressing path charted by most media outlets.

Snopes also obsesses over The Babylon Bee, a site which wears its satirical grin on its face, er, masthead.

For example, the Babylon Bee has roasted Sean Hannity, Ron Paul, President Trump (multiple times), Franklin Graham, Robert Jeffress, and countless others. Snopes has been curiously uninterested in “fact-checking” any of these satirical Babylon Bee articles that make fun of conservatives.

Here’s why it matters.

Social media giants like Facebook often rely on Snopes.com to fact check stories posted by users. If a news outlet runs afoul of Mark Zuckerberg’s digital baby, it could drastically decrease the site’s social media clout, not to mention its traffic.

RealClear Fact Check Review reported that pieces deemed false by fact-checking outfits stand to lose as much of 80% of their Facebook audience. This is because the social media giant uses such verdicts to justify reducing the distribution of pieces deemed false.

That, in turn, could devastate the site’s revenue potential.

Consider it a creative way to deplatform another right-of-center voice. We’ve heard that song before, and it’s getting uglier.

In positive news, The Babylon Bee is fighting back. 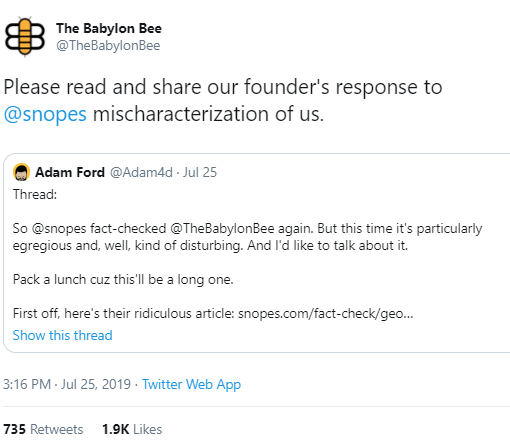 Few comic voices are standing up to the Snopes.com bullies … yet. That’s not surprising. While Jimmy Kimmel laments Kathy Griffin’s struggle after posing with a president’s bloodied head he hasn’t, to our knowledge, rushed to the Bee’s defense.

Kimmel stands behind Griffin because they’re on the same ideological side. He wouldn’t dare mock Ocasio-Cortez, even if she’s the most mockable politician in our lifetime.

Why? Mocking her could ding her credibility and, by extension, hurt the Democrats. It’s why Snopes.com can’t leave The Babylon Bee alone. The outlet fears the power of their very funny viral jokes aimed at the Left. They may wish Twitter would ban their account already.

They help with the next best thing – seeing if their chronic fact-checking will starve them out of business. Or, at the very least, convince them to stop targeting progressives.

It also helps explain why a rodeo clown’s goofy shtick against Obama found him cast out of polite cowboy society.

Today’s social platforms, when given free reign, grant more power to the people. So do satirical sites that avoid the progressive template.