Why Fallon Betrayed His Personal Pledge, Joined the Resistance 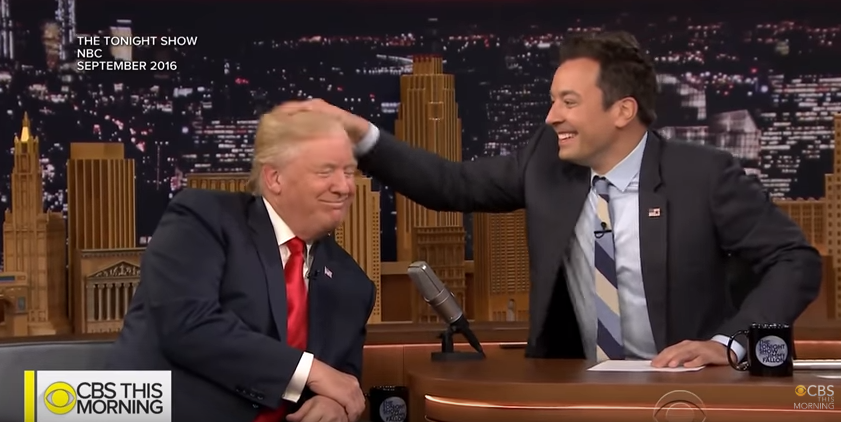 Jimmy Fallon had a distinct advantage entering the Age of Trump.

The former Saturday Night Live star hadn’t cut his teeth with sharp political satire like his peers. We knew him for his wicked Boston accent, a killer Mick Jagger impression and his Everydude charm. It’s partly why NBC chose him to succeed Jay Leno as host of the iconic Tonight Show in 2014.

While the bulk of his competitors took a hard left turn after Donald Trump’s election, Fallon mostly stayed the course. Fallon’s ratings took a hit, in part, because he didn’t beat the anti-Trump drum like his competition.

For many viewers, late night TV became a brand of therapy with monologues suddenly chockablock with political statements over jokes. Not Fallon. He stuck to viral video friendly bits and affable actor chats.

It’s easy to see why Fallon might take a more neutral position for that reason alone. Being different can be a decided advantage on television. See Fox News as a glaring example.

Only the NBC star explained at the time that getting political isn’t in his comic DNA. Here’s what Fallon told an NBC interviewer as to why he had no intention of turning his late night couch into a liberal pulpit.

It’s just not what I do. I think it would be weird for me to start doing it now. I don’t really even care that much about politics. I’ve got to be honest. I love pop culture more than I love politics. I’m just not that brain.

More recently, Fallon is sounding more like Colbert, Kimmel and every other late night “resistance” show. No, his monologue isn’t a non-stop assault on both Trump and the GOP agenda. He’s still making a decided push to appeal to progressives in our divided age.

He appeared at this year’s Parkland High School graduation to personally cheer on the students pushing for more strict gun control legislation.

Then, he made a politically charged donation after President Trump tweaked him over not standing tall to the fallout from their friendly 2016 interview. 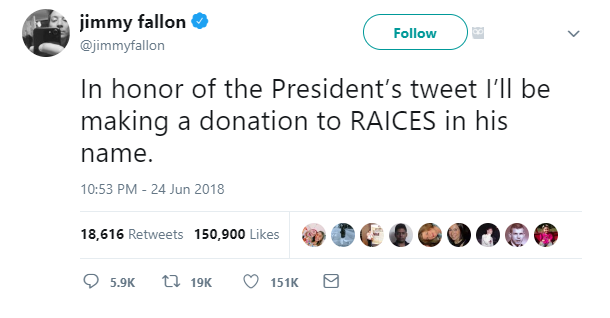 Fallon joined the March for Our Lives rally March 24, along with a throng of celebrities to promote more gun control legislation.

Last week, Fallon teamed with Conan O’Brien and Stephen Colbert to fire back at Trump for mocking the late night landscape at a recent rally. Trump’s comments came after two-plus years of the hosts saying the nastiest things possible about the real estate mogul turned president.

The aforementioned segment proved particularly sad for Fallon. The three late nighters yukked it up over the Red Hen restaurant throwing Sarah Huckabee Sanders out.

In a sane culture, that kind of intolerance would rile up liberals, the same souls who decried a baker refusing to craft a custom cake for a gay wedding. Instead, the liberal late night hosts chuckled over the incident. That had to difficult for conservative Fallon fans to stomach.

The question remains: why did Fallon belatedly join The Resistance?

It’s a multi-pronged answer. Let’s start with President Trump himself. He should have stayed above the fray and let Team Late Night further marginalize itself with its collective hate. Republicans love how Trump fights back, contrasting him to both President George W. Bush and Mitt Romney. Those GOP politicians refused to return fire when attacked. 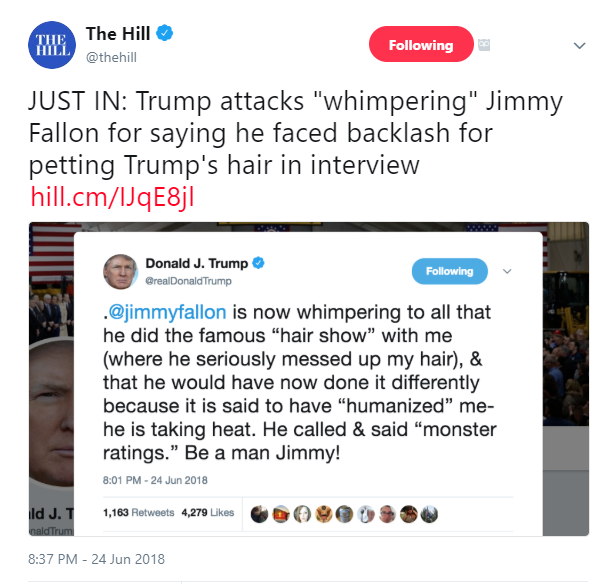 That time? He should have held his fire.

He’s better off ignoring the late night slings and arrows. That’s hardly the sole reason why Fallon joined The Resistance, though.

The media and liberals alike (they’re often the same) castigated Fallon for tousling Trump’s hair during that 2016 “Tonight Show” appearance. The august Hollywood Reporter called the moment the biggest mistake of Fallon’s career.

His anemic comedy Taxi better fits that description, to be fair. Fallon has been trying to get back in the media’s good graces ever since.

The other reasons for Fallon’s hard-left turn are more pragmatic. The media regurgitates every single Trump jab uttered on late night TV. Every Colbert slam. Every Michelle Wolf takedown.

It’s dog bites man journalism, and there’s a simple reason for it. Reporters would love to say these insults themselves, but they can’t for fear of obliterating their professional standards. So, as Derek Hunter says in his great new book, “Outrage, Inc.: How the Liberal Mob Ruined Science, Journalism, and Hollywood,” they quote the late night stars saying what they wish they could write.

If you’re Fallon, that means watching all of your late night peers get tons of free media coverage. That amounts to a serious advantage for those who play by The Resistance’s rules.

Just Google “Fallon Colbert Conan Trump” and see all the media hits for their new video.

He simply wants in on the action. Hard to blame him.

For a while, Fallon quietly stood out as the anti-late night host for the Trump years. That could have played out nicely for Fallon, positioning himself as host embracing both red and blue state America.

Angering half the country for a few years might offer a modest ratings bump. It also could come back to haunt late night comics when the White House eventually changes parties. The need for late night therapy will be gone and so will Red State viewers sick of all the hate aimed in their direction.

Fallon could have rode that wave for years. Instead, he went back on his own word to join The Resistance.