The Sad Transformation of Jimmy Kimmel Is Complete

Most of us don’t. Not anymore. He’s unrecognizable in his current form, a hard-left comic with little empathy for those who lean to the right. That’s roughly half the country.

The jocular comic shot to fame by hosting “Win Ben Stein’s Money” and palling around with Adam Carolla. The duo created The Man Show, a gleefully macho series that wouldn’t be allowed on Comedy Central today.

Gorgeous women jumping on trampolines? Skits mocking the women’s suffrage movement? The online petitions by outraged progressives to shut the show down would break records. Comedy Central would quickly take a knee.

Those were less “woke” times, though.

He parlayed that Everyman persona into late night fame. His Jimmy Kimmel Live, now in its 14th season, never threatened The Late Show or The Tonight Show in the ratings wars. The ABC show still draws a sizable crowd and occasionally inspires viral gags that crush YouTube.

That was then. Before the rise of Donald Trump and a media landscape that threw away the remaining shreds of its integrity.

Kimmel wants in, apparently. And if his aw, shucks brand has to hit the circular file, so be it. The transformation began with a heartfelt tale tied to his ailing newborn.

Last May the comedian shared an update on his young son’s health. The lad required significant medical attention to fix a heart birth defect. A teary-eyed Kimmel shared the latest updates on his son’s condition, slipping in a plea for better health care options for all.

Weeks later, Kimmel got more pointed, and partisan, in his defense of ObamaCare. A quick note: Kimmel never shed a tear, or weighed in in a similar fashion, when we learned President Barack Obama’s pitch for his health care overhaul was riddled with lies.

“But the invocation of personal experience in political debate is generally obtuse because it is a soft form of identity politics. It puts those arguing in the position of supposedly rejecting your personal experience, thus impugning your integrity or the veracity of your feelings … The whole point of determining policy is that empathy shouldn’t outweigh reason.”

The old Kimmel was fading fast. In recent months he’s cranked up the partisan rhetoric. The Daily Beast reported that he sought out the counsel of Sen. Chuck Schumer, a hard-left Democrat, before one energized monologue.

Kimmel even called out Rep. Paul Ryan in a way the “old” Kimmel never would. 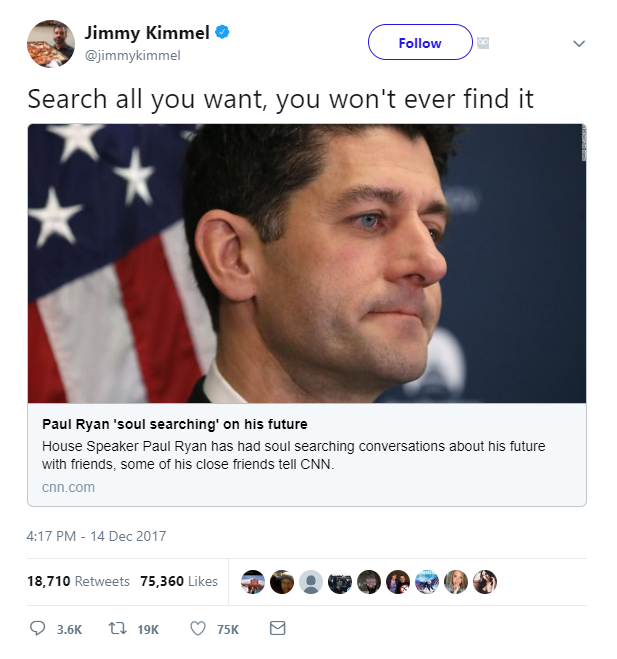 He waded into the gun control debate following the Las Vegas shooting massacre. Naturally he demonized those with whom he disagrees.

“They should be praying for God to forgive them for letting the gun lobby run this country,” Kimmel said of the GOP.

Over the weekend Kimmel spoke to the folks at Pod Save America, a liberal chat show. Here’s a tweet sharing one of the comedian’s comments. 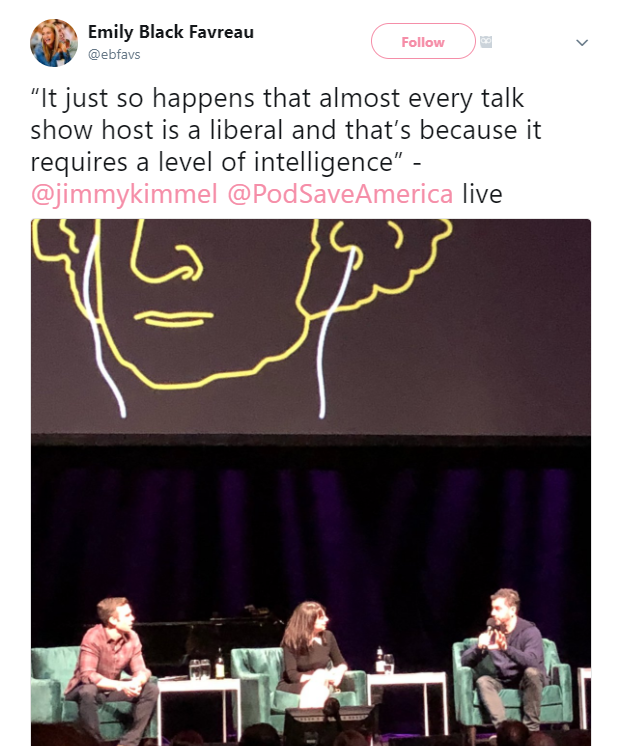 Fellow late nighter Stephen Colbert once said, “reality has a well-known liberal bias.” Even Colbert wouldn’t push the comment as far as Kimmel did.

Kimmel’s hard-left opinions can be seen in many of ABC monologues. Here’s a sample rant from his Feb. 1 telecast. See if you can spot any gut busters in the following:

To call Devin Nunes Donald Trump’s lap dog would be an insult to dogs. And laps …”

He then targeted President Trump and his Fake News assault.

“That’s Step 1. Step 2 is when multiple newspapers, and news organizations, and reporters, further an investigation, whatever it is, when they report something you don’t like. If you’re the President now, you don’t just attack the newspapers or the news networks, you attack the media. You say the media is biased. You call them the elite media. They’re all in league together. Everyone except Fox and Friends is plotting to get you. Because they don’t want America to be great again!”

“And then, once the media is playing defense, you climb another rung…When the FBI steps in and starts sniffing around and handing out subpoenas…what do you do? Same thing you always do…You discredit the FBI, you discredit the special counsel, you discredit anybody who might possibly come up with information you don’t like.”

Is anyone laughing? What you just read sounds like a Daily Kos diarist, not one of the country’s notable late night comics. Fact checking his comments, an easy effort, is besides the point.

So why the Kimmel transformation? He’s no longer the bratty young comic trying to cut his teeth in comedy. He’s 50 He’s also aware how the media treats comics who lean left.

What you’re not seeing in the media love fest for Kimmel? Anyone digging into Kimmel’s Comedy Central past. Shouldn’t a woke reporter or two remind us how he ogled bikini women jumping on trampolines? What about Kimmel, in blackface, imitating basketball legend Karl Malone for the same show?

Kimmel is hardly the only late night show leaning to the left. They all do, save Jimmy Fallon. There’s still a big distinction between the “new” Kimmel and his competition.

Colbert has always been politically progressive. His shift from Comedy Central to CBS didn’t change that. HBO’s Bill Maher has been acerbic his entire career. Samantha Bee broke out of the late night gate by calling Sen. Ted Cruz a “fish-faced horsesh** sandwich.” She was never a lovable progressive.

Arrogant. Self-satisfied. Finger wagging. This isn’t the Jimmy Kimmel we got to know over time. Sadly, Kimmel 2.0 is likely here to stay.