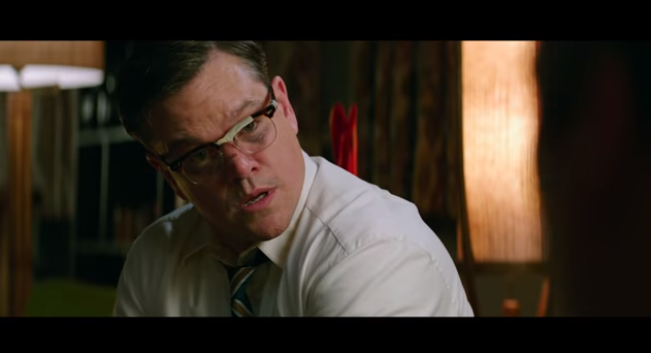 This dark satire offers flashes of genius before succumbing to the director's unchecked rage.

Those two philosophies collide in Suburbicon, the second oddest movie of the year. (Top prize goes to Goodbye Christopher Robin, the tale of two lousy parents who inspired a beloved children’s book series while crushing their son’s soul).

Clooney’s latest directorial misfire fuses an actual tragedy with a classically Coen farce. The brothers penned the original script decades ago only to abandon it. Good instinct. Clooney and creative partner Grant Heslov took the dusty script and added a racially-charged incident.

It’s hard to say exactly. The film throbs with hatred for 1950s suburbia, no doubt. And maybe the 2017 version, to hear Clooney’s recent press musings.

The racism on full display is underlined, highlighted and cast in bold type. Just try missing it. We dare you. Beyond that? Maybe it’s Clooney’s confession that he’s better off in front of the camera, not behind it.

Suburbicon starts with sizzle and snap. We’re thrust back into the candy-colored ‘50s, a time when Suburban USA took root across the heartland.

Only the color of the average flyover hamlet was decidedly pale. And residents made sure it stayed that way. When an attractive black couple (Karimah Westbrook, Leith M. Burke) moves into the well manicured Suburbicon community all hell breaks loose.

The second narrative begins when thugs invade the home of mild-mannered Gardner Lodge (Matt Damon). Gardner keeps his family calm during the break-in, but the hoods accidentally give his wife (Julianne Moore) too much chloroform.

She dies, but her twin sister (also Moore!) bravely takes her place by Gardner’s side while the family mourns.

Only there’s something odd about Gardner’s reaction to these tragic events. Anyone who can’t see what’s coming next must be brand spanking new to movie watching.

But that’s not the biggest problem here.

Clooney’s film is mesmerizing during these early sequences. He’s got our undivided attention even while the oh, so obvious twists unwind.

The issue starts with Gardner. Who is he? What’s he got up his sleeve? And why is he so impossibly distant from his adorable son (an effective Noah Jupe)?

Clooney has little time for the critical questions. He’s too busy embracing all the right ’50s tropes, from the impressive set design to the stylized patter. Kudos to the casting team for nailing the supporting characters.

It’s like they jumped right out of a time capsule.

The director also wags his finger at the period’s racism so hard you expected a digit to fly off, 3D style, right out of the screen.

Meanwhile, he’s can’t be bothered to explain much of what transpires in the third act.

The Coens excel at crafting losers in well over their heads. They repeated that theme via the third season of FX’s Fargo. To paraphrase a certain 007 song, nobody does it better.

That nimble touch is missing here. That leaves Clooney to fall back on his broad comic styling. So where’s the structure to hold it all together?

Oscar Isaac appears mid-movie as a skeptical insurance agent, and the movie roars back to life for a spell. Sadly, his character arc is just as disappointing as the film’s calamitous third act.

Suburbicon never justifies combining the screenplay’s two critical plots. Neither gets enough attention, something darn near criminal when it comes to the black couple at the heart of the neighborhood bedlam. Couldn’t the film give the male black neighbor some dialogue?

Suburbicon is the umpteenth film to show the dark underbelly of suburban life. When you’re trawling through such a thicket you darn well better offer a fresh angle.

Clooney and co. start strong but come up empty.