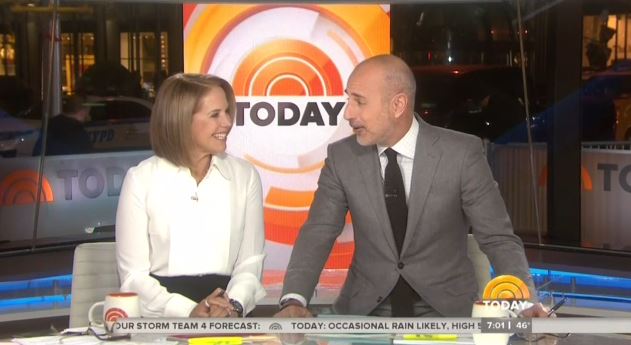 You can’t expect the press to ignore Katie Couric’s “return” to the show that made her a star. Yet, once more, media outlets let their biases show by not mentioning the biggest Couric story of the past 12 months.

Namely, the $12 million defamation lawsuit against her in connection to an anti-gun documentary. The suit came after the Couric-produced “Under the Gun” edited a sequence to make a group of pro-Second Amendment activists look outgunned, rhetorically speaking, while being interviewed by the journalist.

Bias by omission can be an even bigger problem than the slant too many outlets slather on the news.

Couric returned to NBC’s Today, Monday, rejoining co-anchor Matt Lauer after an extended absence. Despite the show being four hours long, the lawsuit never came up. Lauer certainly was aware of the documentary. Back in May of 2016, he interviewed Couric, hyping her “powerful new documentary.” Lauer actually insisted that it “examines both sides of the gun safety debate.”

The return is just for one week, but it stirred plenty of press interest.

The Hollywood Reporter published a meaty article the day Couric returned to her NBC stomping grounds. Naturally, the adjective “perky” figured into the text, as did some of the playful banter between old chums.

Left out by the industry publication? That multi-million dollar lawsuit. But THR wasn’t alone.

A look at “Couric Returns” stories by Deadline.com, People magazine and the New York Daily News showed they didn’t bother reminding readers of the massive lawsuit.

UK’s Daily Mail wrote an expansive piece on Couric’s return, going so far as to reference her infamous interview with Gov. Sarah Palin during the 2008 presidential campaign.

The Washington Free Beacon broke the story about the malicious edit last May. The documentary showed members of the Virginia Citizens Defense League, a gun rights group, tongue tied after a tough question by Couric. An audio recording of the original interview, obtained by Free Beacon, showed the League members quickly answered Couric’s query.

In the film’s final cut an eight second silence was inserted after Couric’s question, and then the film cut away from the interview. Couric later said she regretted the editing choice in that part of the film but stood by the documentary.