In the wake of the immense political conflagration that Michael Wolff’s upcoming book Fire and Fury has caused, Thursday’s Morning Joe was almost entirely consumed by discussion of all its salacious claims and their implications for the Trump White House. Even though multiple guest panelists on the show admitted to the shaky factual foundation for Wolff’s book and the unproven nature of many of his assertions, they nevertheless largely treated his testament as gospel.

Much of Morning Joe’s coverage focused on dissecting the purported comments of Breitbart News Executive Chairman and former White House Chief Strategist Steve Bannon. However, co-host Joe Scarborough was also fixated on using some of Wolff’s claims and one of his own alleged personal conversations with Trump to make the case that the President is literally illiterate. As Scarborough put it: “[Trump] doesn’t read. He didn’t read. [...] [T]here has been a question of whether this guy can read, whether he does read.”

Kasie Hunt teed up Scarborough to go on his rant about Trump not being able to read by going through verbatim excerpts from Wolff’s book, even while noting that NBC News had still not confirmed “much” of it:

So, uh, Michael Wolff's book—much of which has not been confirmed, we should note, by NBC News—also alleges that senior staffers at the White House have low opinions of the President's intelligence. There are many creative words. Quote: “Trump didn't read. He didn't really even skim. If it was print, it might as well not exist. Some believed that for all practical purposes, he was no more than semi-literate. For Steve Mnuchin and Reince Priebus, he was an “idiot.” For Gary Cohn, he was “dumb as” blank [on screen: “s**t”]. For H.R. McMaster he was a ‘dope.’”

And “[t]he list went on.” Wolff also writes this, quote: “In April, an email originally copied to more than a dozen people went into far wider circulation when it was forwarded and reforwarded. Purporting to represent the views of Gary Cohn and quite succinctly summarizing the appalled sense in much of the White House,” this is what the email said, quote: “It’s worse than you can imagine. An idiot surrounded by clowns. Trump won’t read anything -- not one-page memos, not the brief policy papers; nothing. He gets up halfway through meetings with world leaders because he is bored.

“And his staff is no better. Kushner is an entitled baby who knows nothing. Bannon is an arrogant” expletive [on screen: “p***k”] “who thinks he’s smarter than he is. Trump is less a person than a collection of terrible traits. No one will survive the first year but his family. I hate the work, but feel I need to stay because I’m the only person there with a clue what he’s doing. The reason so few jobs have been filled is that they only accept people who pass ridiculous purity tests, even for midlevel policy-making jobs where the people will never see the light of day. I am in a constant state of shock and horror.” A senior White House official tells NBC News that Cohn never wrote such an email and claims about his thinking in the book are 100% untrue.

With a giddy smile, Hunt turned the show over to Scarborough, who immediately dismissed the White House’s defense of Cohn as something that “of course they would say.” MSNBC National Affairs Analyst John Heilemann emitted a great belly laugh and sarcastically mocked the White House’s denials of the veracity of Wolff’s book, remarking: “100% untrue. Not, not 57% untrue, but that -- there’s literally nothing that is attributed to Gary Cohn in this book that he feels -- in fact, he feels exactly the opposite. His love for the President is entire and pure.”

Scarborough then replied to Hunt’s selection of excerpts in his own way by going on a diatribe about Trump being illiterate, which was itself oddly disjointed and incoherent at times: 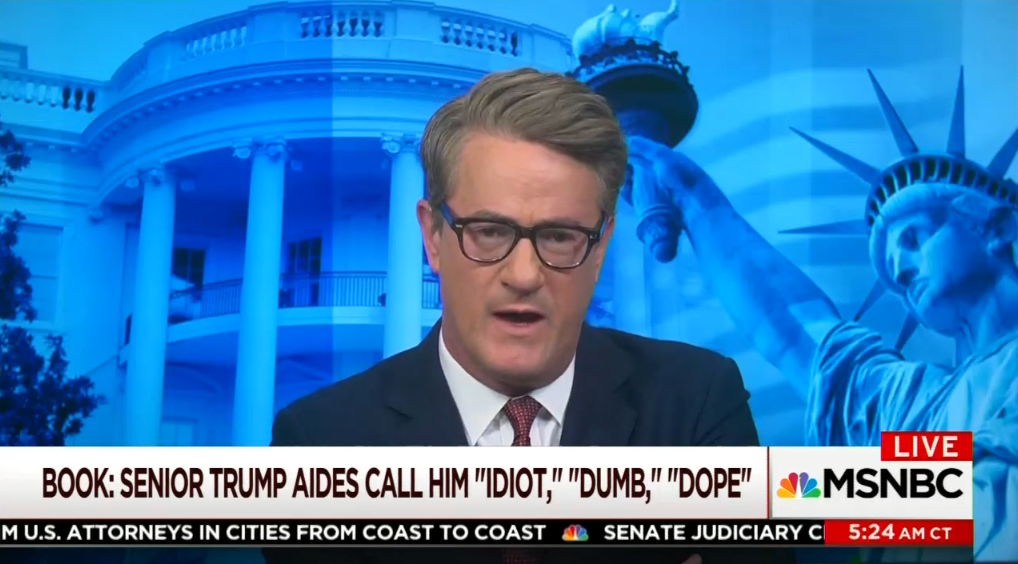 Yeah, ex-, exactly. Megan, I, I, the, the -- he doesn't read. He didn't read. I remember one time in a, uh, let's just say a tense, uh, uh, uh, meeting with Donald Trump, I actually after, I think it was the, uh, right after the first debate, I said, uh -- and of course we disagreed on his performance. I thought it was horrible. He thought it was the greatest debate performance ever. I said: Donald, let me ask you a question. Do you read? Do you read? And he just stared back at me and made Mika a little nervous, uh, for me to be insulting this guy. I go: Do you read? If somebody -- and, um, this is verbate. If somebody wrote you a one-page memo, and, and, and wrote a one-page memo for every issue, could you read it? And he lifted up his Bible, his childhood Bible. He goes: Of course I read. Uh, that was the wrong book for him to hold up to say he read it. But, there, there has been a question of whether this guy can read, whether he does read. Uh, and inside the White House, again, we've all heard these complaints. He refuses to read anything. He gets bored, uh, after about fifteen seconds of even people talking to him.

Without skipping a beat, Bloomberg Businessweek editor Megan Murphy piled on by questioning why any of Trump’s staffers or Cabinet members were staying with him in the first place while simultaneously arguing that it doesn’t really matter if everything Wolff says in his book is true:

Well, a little bit about palace intrigue about that Gary Cohn memo that Kasie was just discussing—it was purportedly described as an email from Gary Cohn to his former boss Lloyd Blankfein, the ch-, the chief executive of Goldman Sachs, and that's what's caused a lot of consternation inside Goldman Sachs as well with people pushing back and saying Gary would have never written that kind of email. Gary and Lloyd aren't in communications. They certainly aren't email buddies. But the main point is the same, which is that these are the kind of things you are hearing, regardless of whether every single allegation, every single piece of information, is, in fact, true, was said, is an accurate quote. The question of whether he reads, the question of how engaged he is, the question of what his family members are doing, the question of what they know when they make these kind of statements, these kind of tweets—this is incredibly serious stuff.

But I also wanna flip this on its head. If this is, in fact, the state of the White House, which everyone around this table knows that it is, what is Gary Cohn still doing there? Is tax reform, getting through a tax reform comprehensive package, really worth this? Is this -- if this is an accurate summary of what conditions are like in there, where he’s in a constant state of shock and horror, where, inarguably, so many people of senior administration officials are in a constant state of shock and horror, cannot get him to do the simplest of things, cannot get him to read one-page manu-, memos, cannot get him to be engaged on serious policy issues, whether that's Iran, North Korea, Syria, ad infinitum. Is this really a place where they still wanna be doing their work? Do they think they’re gonna be able to leave this White House with their heads held high because they passed a comprehensive tax reform package? It's a question, I think, that too many of them just simply are running away from and aren't being called t-, called on the carpet for, regardless of what this book says about the Trump administration as well.

How can supposedly serious journalists parrot what are, by their own admission, unsubstantiated factual claims while openly stating that they don’t care about what the exact truth is? How does that qualify as news?

Is this really the state of journalism in 2018?

Earlier in the broadcast, Commentary Magazine editor John Podhoretz, echoing earlier comments of his from a piece he published in the New York Post, was the only one on Morning Joe to explain the problem with taking Wolff’s book at face value in any substantial detail, although even he appeared to discount the larger importance of figuring out how credible all of Wolff’s claims are:

Look, the problem with the book, this Fire and Fury book by Michael Wolff, is that Michael Wolff—a long time journalist writer on all sorts of topics, from the first dot-com boom to Rupert Murdoch to the entertainment business -- Michael’s a very good writer, very entertaining writer—plays it fast and loose, and so, uh, doesn't source himself well. Speculation is talked about in exactly the same way that, uh, that actual facts that he's gathered are talked about. You cannot sort out the gossip from the fact. It's very difficult. This is clearly gonna be a problem with this book.

Having said that, the portrait of utter, uh, improvisatory chaos that came from these two pieces yesterday—the one about it in The Guardian and the excerpt from it in New York Magazine—the portrait is so horrifying that, um, any impression over the last month—even though most of what, that we’ve read is about, you know, six months ago—but, any portrait that we’ve read in the last month or any sense we have over the last month that the ship is being righted and that policy is being made and more serious efforts are being made on dealing with the Iran protests and stuff like that, you -- it, it's almost impossible to get back in the mindset that 2018 really might be a better year, 2018 might be the serious year.

Well, perhaps that is the point?

Regardless of what ultimately turns out to be true and false in Fire and Fury, it does not bode well for Wolff’s credibility that one of the stories from his book excerpt in New York Magazine already appears to have fallen apart. Specifically, Wolff’s claim that Trump did not know who former Speaker of the House John Boehner was in late 2016 squarely contradicts publicly available evidence, including a string of Trump tweets about Boehner from previous years and a golf outing that they went on back in summer 2013.