On Wednesday’s Morning Joe, while discussing President Trump’s remarks to reporters yesterday on the White House lawn, NBC News Capitol Hill correspondent Kasie Hunt decided to do an impromptu campaign ad for Democratic senatorial candidate Doug Jones, who is Roy Moore’s opponent in the Alabama special election. Part of Hunt’s pitch involved the fact that Jones is best known for prosecuting the perpetrators of the infamous 1963 Birmingham church bombing that killed four black girls. Co-host Mika Brzezinski instantly saw a connection between this piece of information and Trump’s earlier claim to journalists that Jones is “soft on crime.” From this realization, she concluded that Trump must in some way be okay with, or at least not that concerned by, blowing up and killing children in churches for racial reasons.

In the clip, you can see how Brzezinksi walked right up to the line of outright saying that Trump was okay with the bombing before catching herself:

KASIE HUNT: Real- -- just really quickly, one thing that Democrats have going for them here is that they actually had a really good candidate who really fits their state-

HUNT: -and who is not -- it's not a situation where it's a nationalized race where the, you know, the DSCC went in there and didn’t understand or it’s a progressive that doesn't line up. He is somebody who can actually go into churches with white voters. He can go into churches with African-American voters.

HUNT: He, you know, fought this cold case with a KKK bombing. I mean, he is somebody who, you know, they -- the Democrats lucked out, quite frankly.

HUNT: They weren’t paying any attention to it.

BRZEZINSKI: And the President did not tell the truth about that. I think he said he was soft on crime, maybe soft on the kinds of crimes that the President, you know -- whatever. I just -- the President seems to have a thing about race, an issue with it.

Brzezinski appeared to be echoing the sentiments of Renato Mariotti, which were promoted in The Washington Post this morning: 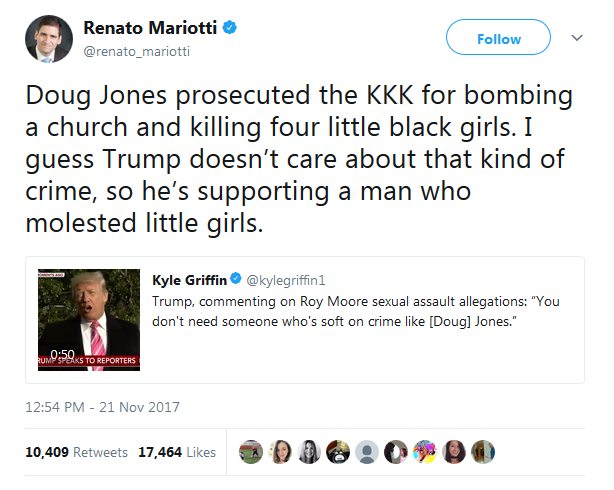 Of course, neither Brzezinski nor any of the other panelists mentioned a far more obvious potential source of Trump’s criticism of Jones – the Democrat’s official position supporting criminal justice reform by instituting widespread sentence reductions for convicted criminals [emphasis my own]:

State and local government spending on jails and prisons has risen at more than three times the spending on education in the last two and a half decades. We can do better. We must do better.

As both a former federal prosecutor and practicing attorney, I disagree with the attorney general rolling back sentencing reform efforts. Those sentencing reforms reduced the prison population, saving money that could be better utilized to provide education and services to families.

I support continued efforts at sentencing reform and back creating options for alternative sentencing, seeking to rehabilitate those in the justice system instead of sending all of them to prison at a high cost to their families and to taxpayers.

Along with sentencing reform, we must reduce sentencing disparities that see a disproportionate number of black and Latino Americans sentenced to prison. People of color make up 67 percent of the prison population, even though they make up only 37 percent of the population of the United States.

I also support modifying the three-strikes law to provide alternatives to lifetime sentences for men and women convicted of non-violent offenses capable of returning to their families and to society as productive citizens.

Never mind, Trump being pro-KKK makes much more sense as an explanation for his comments. It’s also clearly the reason why he selected Jeff Sessions to become his Attorney General. Surely, the President was impressed with the senator’s history of white supremacism as a U.S. Attorney for the Southern District, where Sessions fought to desegregate Alabama schools and pushed for the death penalty for KKK murderer Henry Francis Hays.

But seriously, how much further can MSNBC possibly descend into the journalistic black hole that they are engulfed in at this point?