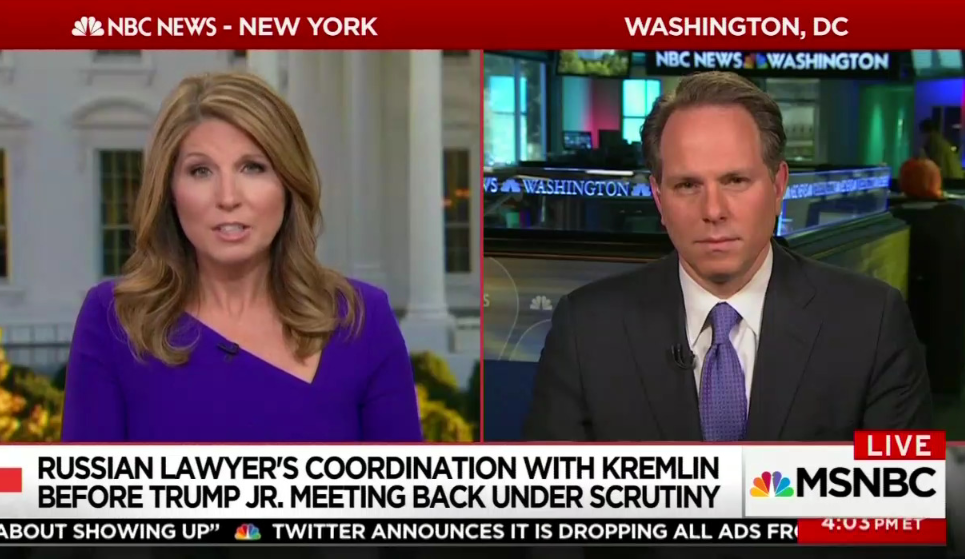 If you were expecting something more substantive, sorry, I’ve got nothing for you.

So how did Wallace and Bash get to the conclusion that Trump colluded with the Russians? Well, here’s how they put the pieces together:

WALLACE: Donald Trump started his day today by tweeting this: “It is now commonly agreed, after many months of COSTLY looking, that there was NO collusion between Russia and Trump. Was collusion with HC!” It turns out that Donald Trump often tweets the opposite of what is true. In this case, not five hours after he sent that tweet this morning, The New York Times is reporting that the Russian lawyer Natallia Veselnitskaya, who found herself in a conference room deep inside Trump Tower sitting across from the President's son, his son-in-law, and his campaign chairman was closely tied to the Kremlin.

WALLACE: According to The New York Times, quote: “The coordination between the Trump Tower visitor and the Russian prosecutor general undercuts Ms. Veselnitskaya’s account that she was a purely independent actor when she sat down with Donald Trump Jr., Jared Kushner, the president's son-in-law, and Paul Manafort, then [...] campaign chairman. It also suggests that emails from an intermediary to the younger Mr. Trump promising that Ms. Veselnitskaya would arrive with information from Russian prosecutors were rooted at least partly in fact.”

WALLACE: What is the significance of The New York Times confirming in a report today, essentially the opposite of what Donald Trump rolled over and pounded out with his thumbs, I have to guess, on Twitter? He says that there was no collusion while The New York Times offers yet another fact pattern to prove that there was indeed collusion between the Kremlin and the Trump campaign.

BASH: Yeah, let's go through precisely, Nicolle, where this new piece of information fits in the collusion question. So, first of all, there are a number of circumstantial pieces of evidence that demonstrate collusion: the longstanding financial ties between the Trump organization and Russia; candidate Trump and President Trump's fawning over Putin and his pro-Putin policies; and, of course, all the back-door discussions, private secret discussions between Jared Kushner and the Russians and Mike Flynn, then National Security Adviser, and the Russians. But those are circumstantial. Now on the direct evidence side on the ledger, you have the June meeting in which it was set up with an e-mail from a representative of a Russian oligarch saying: this is part of the Russian government’s support for the Trump campaign. And now comes this piece of evidence which directly corroborates that other piece of direct evidence. It, in a sense, states that the Kremlin knew that this delegation was going to Trump Tower, they authorized it, and they greenlighted the talking points. That is direct evidence of collusion.

Even if one takes The New York Times allegations at face value that there was a coordinated effort between Veselnitskaya, the Russian prosecutor, and the Kremlin itself to influence the Trump campaign, are liberal journalists now seriously suggesting that being the target of a disinformation or influence campaign is the same as participating in it? Should we expect to see future nonsensical segments on MSNBC that call for prosecuting thieves or rapists or murderers with their victims?

Frankly, I wouldn’t put anything past them at this point.