Morning Joe: Time to Put ‘Right-Wing Media’ 'Out of Business' and 'Break Their Backs'

Although the general tenor of the discussion involved Joe Scarborough repeatedly invoking a recent Politico/Morning Consult poll as evidence that roughly 90% of American voters want some form of amnesty for the DACA “dreamers,” Schmidt decided to take it one step further. He labeled those who support deporting “dreamers” as “extreme,” purveyors of “cruelty,” and “loons screaming out there on the fringes” who are “gonna have no impact.” Schmidt also trotted out the old trope of describing “a faction of the Republican party [that] has had a gun to the head of the country on defaulting on the country's credit.”

However, far more sinister than comparing Republicans who advocate for fiscal responsibility to terrorists, Schmidt couldn’t help himself but continue off into wilder territory. Talking about the Politico/Morning Consult poll’s 12% of American voters who support deporting “dreamers” and the “right-wing media-entertainment-wing” of the Republican Party, Schmidt ranted:

"And what we're going to find is if these guys don't bend is that this group of people who have so dominated our politics, injected this anger, this vitriol, they're powerless. Put them out of business. That's what the opportunity right now for this country is."

Co-host Willie Geist promptly asked for clarification: "What does that mean Steve? How do you put them out of business?" Schmidt replied:

You put them out of business by [not] pretending they have actual influence. That there is a majority of people in this country who subscribe to these absurd positions that are propagated on Breitbart, on the talk radio wing of the Republican party. [...] They're not looking to strike deals with him. They're looking to dominate him. They’re looking to dominate, to dictate, to mandate that the Republicans embrace positions that the overwhelming majority of these people up there endowed with any level of common sense know are absurd, know are bad for the country. [...] This is the moment to break their backs.

Considering that Schmidt believed back in mid-late October of 2016 that Hillary Clinton would win over 400 electoral votes against Donald Trump come November 8th, it’s difficult to take his prognostications with respect to polling too seriously.

Instead of rallying the troops to curb stomp conservative media into a bloody pulp, perhaps Schmidt and other analysts at MSNBC should take a look at a broader array of polls.  For example, as Nate Silver’s outfit FiveThirtyEight has recently pointed out, it was likely Trump’s hardline campaign stance on immigration that propelled him to victory in the primaries last year. Across the country, Trump voters who rated immigration as their top issue consistently voted for him in huge numbers.  Considering that Trump explicitly promised to end DACA, reversing course on that could well be seen as a betrayal.  Additionally, a YouGov poll from earlier this September clearly shows that, contrary to what Scarborough repeatedly suggested during the segment, 57% of Trump voters and 49% (a plurality) of Republicans reported wanting Trump to end the DACA program.  It seems unlikely that these numbers have changed so dramatically in just a couple of weeks.

Regardless, one poll from Politico is certainly not conclusive evidence of a clear-cut nationwide call to save DACA. Thus, it would behoove the MSNBC panel to consider a slightly broader number of polls than just one in the future when considering how many Americans support or oppose something.

The following is an extended transcipt of the segment:

JOE SCARBOROUGH: Yeah. Steve Schmidt, this is, this is so revealing. I remember after September 15th, 2008, I remember, I think it was...uh...who was it? It was, somebody said this is when the tide goes out and you see who's naked and who actually has bathing suits on, swimsuits on. This is when the tide goes out and you see that this massive, huge base that everybody is warning Donald Trump he can't cross actually constitutes 12% of the American people. That even 75% of the people who supported Donald Trump don't want him to kick out dreamers, people who are serving in this country, people who came here at no fault of their own. So it seems to me the more they screech, the more they complain, the more they say ‘oh, Donald Trump’s gonna be destroyed because we’re his base,’ they miss the fact that Donald Trump's base are Trumpists, first of all, they support him, and secondly, they're just picking the wrong hill to fight on here because 90% of Americans support Donald Trump's position.

STEVE SCHMIDT [MSNBC, POLITICAL ANALYST]: Look, one of the most extreme positions in American politics is this idea that we're going to take 800,000 young people who came to this country through no fault of their own that are productive citizens that will be our future doctors and teachers and engineers, many of them who have fought in the wars in Iraq and Afghanistan, some having received valor awards,  that we're going to deport them, that we’re going to break up the families, that the level of cruelty, no one in this country is for this except for a small extreme base of 10 to at the maximum 15% of the people. And this idea that Breitbart somehow projects power, right? It has power. It’s illusory power. It’s the type of power that the Wizard of Oz had, that it affects people because they believe in the magic here. And at the end of the day, what we're going to find out pretty soon here if he keeps on this track is just how weak the Breitbart power is, how little influence these people actually have. I mean, the most amusing thing, I was just kind of, you know, thinking about this last night when this broke, I said, are these guys, the Steve Kings of the world, I said: Is it possible that these people are dumb enough to believe? Like the guy who picked up the rattlesnake I read about this summer and kissed it on the nose and got bit in the face, are they so dumb that they didn't see this coming? That they believed that Donald Trump believed this stuff? Donald Trump is utterly transactional. And he woke up one day obviously in the last month and he said: ‘Wow! As was reported in the media, people really hate me.’ And they do. The most unpopular president two-hundred days in in the history of modern polling. And so now he's looking and said: ‘Well maybe I ought to be on the side of some of these issues 70, 75%, 80% of the American people support.’ And we’re gonna hear all these loons screaming out there on the fringes, but it’s gonna have no impact. But it is amazing that they're surprised by it.

SCHMIDT: There are dozens of issues that fall under this category where 65, 70, 80% of the American people are on the common sense side of the solution and just want there to be an honest debate that's mathematically-based when it comes to budget. I think Donald Trump watched the health care debacle play out, watched the threats of a government shutdown, the default on the full faith and credit of the United States. You know, a faction of the Republican Party has had a gun to the head of the country on defaulting on the country's credit, its full faith, you know, for years now. And it was finally enough. Now, I think that the bar has fallen so low that keeping the government open and not defaulting on our debt for the first time in the history of the country is considered some type of achievement. I'm not ready to say that we're at the dawn of a new golden age of American governance here, but that there might be some dialogue, there might be some opportunity to deal with some pressing national issues. I think is [sic] a good sign. But what we're about to see here is a lot of screaming, a lot of yelling, a lot out of histrionics out of the, out of this right-wing media-entertainment-wing of the Republican Party.

SCARBOROUGH: We're talking about the 12%?

SCHMIDT: Right, 12% of the country of 330 million peoples, pretty big number. That being said, it’s not a majority number. And what we're going to find is if these guys don't bend is that this group of people who have so dominated our politics, injected this anger, this vitriol, they're powerless. Put them out of business. That's what the opportunity right now for this country is.

WILLIE GEIST: What does that mean Steve? How do you put them out of business? 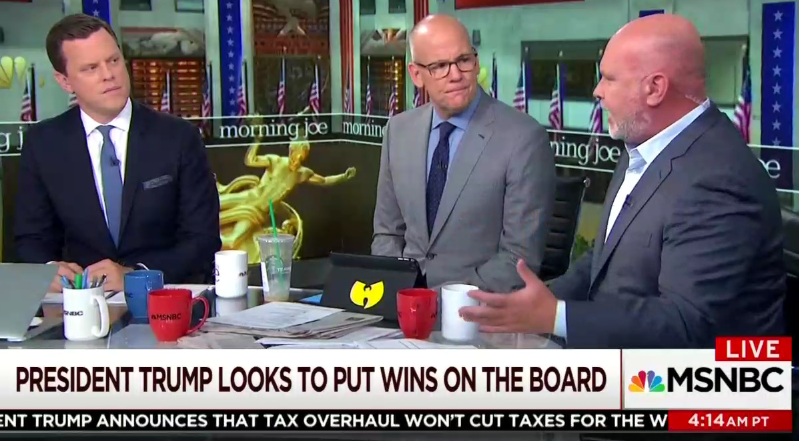 SCHMIDT: You put them out of business by pretending they have actual influence. That there is a majority of people in this country who subscribe to these absurd positions that are propagated on Breitbart, on the talk radio wing of the Republican Party. What, what... Paul Ryan's a good guy. He's not a bad guy, but he's weak. And he doesn't understand how to wield political power. He has a powerful office, and he doesn't understand, I think, the nature of the fight he's in against the Bannon wing of the Republican Party. They're not looking to compromise with him. They're not looking to strike deals with him. They're looking to dominate him. They’re looking to dominate, to dictate, to mandate that the Republicans embrace positions that the overwhelming majority of these people up there endowed with any level of common sense know are absurd, know are bad for the country. And so once the power is exposed as, is that it's Potemkin, that it’s illusory, we get back to the business of governing the country again. This is the moment to break their backs. Paul Ryan better wake up to the reality that he's in a existential fight for the future of the Republican Party. And if he doesn't, not only is he not going to be speaker for very much longer, Republicans are likely to lose their majority in 2018 and then the Democrats will be able to bring legislation to the floor including possible impeachment.