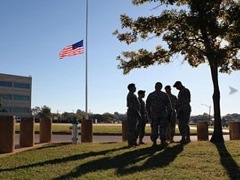 Considering the condition of most of the media in this country, I can't say I'm surprised at their reaction to the murder of 13 and wounding of 30 soldiers at Fort Hood, Texas.

They are trying to blame Maj. Nadal Malik Hasan's terrorist act on the stress of being in the Army and harassment by other soldiers because of his religion. In other words, trying to blame it on anything besides what it is. The fact is that he is a radical Muslim who hates the United States of America and wants to destroy it.

Hasan had never been to war anywhere, so that dog won't hunt. He was a major, and if he was under such heavy persecution why didn't he simply resign his commission?

People are going to say that the Army knew about his disapproval of the wars in Iraq and Afghanistan and his radical Muslim beliefs, so why didn't they simply put him out of the Army?

The answer to that is simple; it's the accursed policies of political correctness. Can you imagine what would have happened if the Army had gotten rid of an officer because he was a Muslim? It would have been the biggest news story in the country. The justice department under Eric Holder would have ruined the careers of anybody who would have been a part of it.

So let's forget all the Dr. Phil B.S. about stress and strain and persecution and all the rest and lets look at the facts.

Hasan is a radical Muslim.

According to a classmate, Hasan viewed the War on Terror as a war against Islam. One of the strongest clues to Hasan's mindset, prior to his rampage, was a post he made on a message board. On it, he tried to compare Islamic suicide bombers with heroic soldiers who would willingly jump on a grenade to save the lives of their fellow soldiers, implying that by blowing up themselves and their enemies, they were saving the lives of fellow Muslims. The thought of going to Afghanistan where he would be surrounded by soldiers who were killing Islamic terrorists was probably more than he could take.

Hasan hated America's War on Terror policies, and reportedly shouted "Allahu Akbar" -which means "God is great" in Arabic- before he deliberately murdered and maimed 43 innocent Americans. He is a terrorist, plain and simple and there is no other was to define it.

I know that all Muslims are not terrorists. I have met some who seemed like fine people. However, radical Islam represents the biggest threat to the United States of America from without and within and if the Muslims of America truly care for this nation they need to start making a lot more noise than they have been.

If Islam is truly a peaceful or even a humane religion, this act should be totally condemned in all of the mosques of this nation. Instead of preaching jihad, the Mullahs should be steadfastly convincing their young people that what Hasan did is nothing more than murder.

On the other hand, it is up to the president and the powers that be to deal with this incident as what it is, an act of domestic terror.

And if anything should make Obama refute his order to close Guantanamo Bay, this should be what does it. Can you imagine bringing Islamic terrorists to the American mainland and putting them on trial knowing there are people out there who would be willing to murder the judge, jury and prosecutor before, during or after the trial?

I know Obama is supposed to be a smart man, but it is downright stupidity to even consider bringing these murderers to American soil and trying them in an American courtroom. They were captured on the field of battle and should be treated as military combatants and spies, falling under the auspices of a military tribunal.

If the prisoners at Gitmo are tried in America, the defense lawyers can demand and obtain the secret documents of the CIA and military intelligence exposing the names of our operatives and rendering them useless as well as placing them in danger of Islamic vengeance.

How many more Hasans are out there waiting to explode? How many deep cover crazies are in our society living as ordinary citizens and waiting for the time when they are activated to walk into the streets of America and shoot down our families.

How is the Obama administration going to deal with this? I know how they'd treat it if one of our soldiers went berserk in the marketplace in Bagdad and shot down 43 people.

This situation needs immediate and decisive action right now, not tomorrow, and to tell you the truth I don't believe that Obama has the guts to deal with it.

Only time will tell.

My prayers and condolences go out to the families who lost loved ones at Fort Hood, and the ones who were wounded.