Bozell & Graham Column: Jay-Z Sells Out for the NFL? 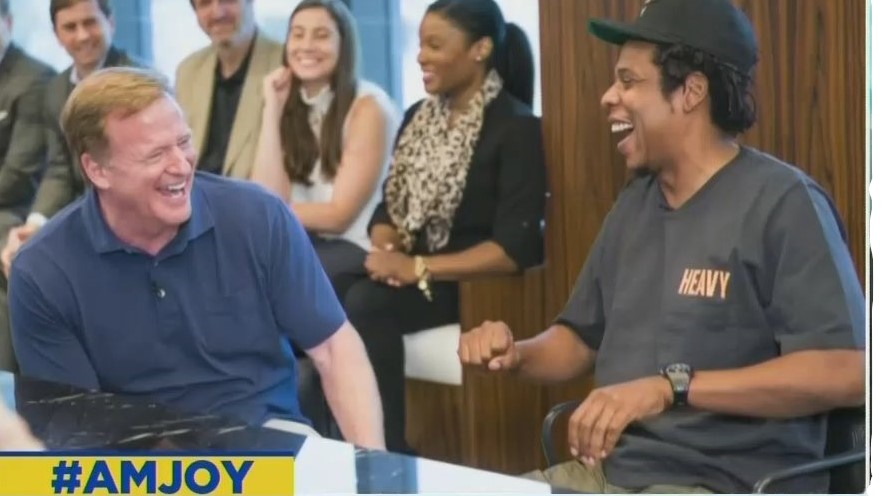 On the verge of a new season, the National Football League is trying a new corporate self-defense crouch to counteract criticism from the Left that it’s insensitive to the Black Lives Matter crowd that urged NFL stars to kneel in disrespect of the national anthem. Those protests, which dramatically drove down NFL ratings and game attendance, came to a stop only when President Trump called out the millionaire ingrates.

NFL commissioner Roger Goodell held a press event with the gangsta-rapper/mogul Jay-Z, and announced his company Roc Nation will take the lead in selecting the league’s live entertainment programming and advise on  its “social justice” initiatives.

Jay-Z, also known by his birth name Shawn Carter, once backed Kaepernick’s crusade, but now proclaimed the whole kneeling thing was yesterday’s news. “I think we’re past kneeling,” he said.

It wasn’t hard to predict that the nation’s enlightened (or to use that obnoxious word, “woke”) sports writers were going to erupt volcanically over this deal. Jemele Hill, the sidelined ESPN lecturer, summed it up for The Atlantic: “Jay-Z has given the NFL exactly what it wanted: guilt-free access to black audiences, culture, entertainers, and influencers.”

The man whose network worth tops the $1 billion mark by virtue of bad-boy anthems like “Big Pimpin’” is now the NFL’s Uncle Tom, selling his soul at the company store, working for The Man. This is fun to watch.

Our favorite leftist tantrum came from Hemal Jhaveri of USA Today, under the headline “Jay-Z's partnership with the NFL is just another reminder that capitalism always wins.” Wait a minute. She wrote this for USA Today, which is about as an entrenched as a capitalist company and media power could be. Does that make her a toady?

Jhaveri didn’t protest that evil capitalists subverted social consciousness when Nike signed Colin Kaepernick to a deal worth tens of millions of dollars to hush talk of its Asian labor practices.  But this was unpardonable. “While Jay-Z’s intentions may be good, this is about acknowledging the limits of how much progressive movements can achieve when they align themselves with entrenched systems of power.”

Memo to Hemal: There’s a reason Woodstock 2 was cancelled. The Sixties are over.

The lecture continued: “Free market capitalism works in many ways to control political dissent, but one of its most insidious forms is by making protest, the kind that requires real, significant sacrifice, into something that is not only unnecessary but feels beside the point.”

Capitalism is “controlling” dissent in the NFL’s case by bending over backwards to pander to the “social justice crowd....off the field.  Football fans hate having the game ruined with political sideshows, just as ESPN discovered fans didn’t want socialist sermonizing as a badgering interruption of their sports highlights.

But the Left never wants to leave the game of football alone. Athletes lecturing in press conferences or on cable TV isn’t enough. They want to get in America’s face and spur outrage on Sunday afternoon. They want to divide – and conquer. But they didn’t. The Kaepernick side has been trounced, and they can’t (and won’t) acknowledge that this war is over, just like some leftists will never acknowledge that the fight over the “Redskins” name is over.

This all makes sense. The Left demands we have a never-ending “conversation” about how everything that’s ever caused America to succeed in the world is based on racist power structures. They can’t stand the idea of listening to a rebuttal from the other side of that discussion.