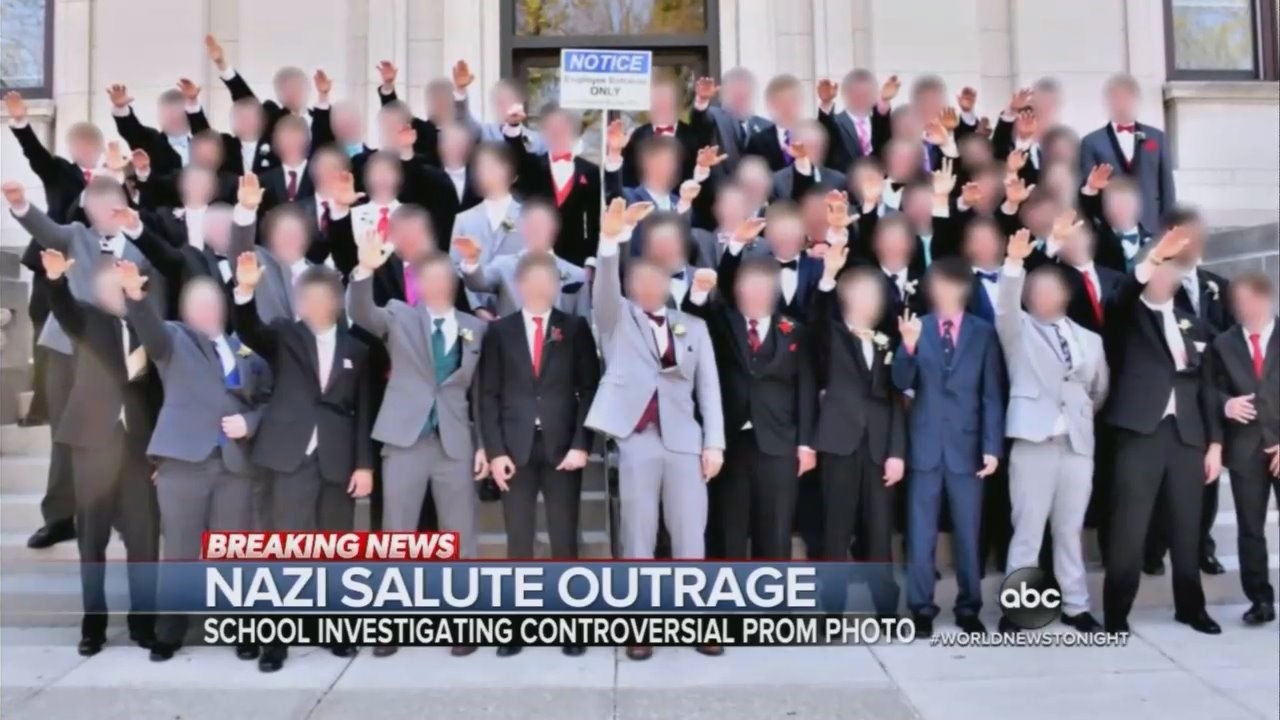 It’s very easy for media elites in Manhattan to decide that one tweet can prove that small towns in Wisconsin are stuffed with racists and anti-Semites. On November 12, ABC, CBS, and NBC all leaped on a tweet from the left-wing talk show “The Young Turks.” It showed a months-old high-school prom photo from Baraboo, Wisconsin, where a collection of teenaged boys on the front steps of the Sauk County courthouse appeared to be giving a “Nazi salute.”

The town of about 12,000 – best known before now as the original headquarters of the Ringling Brothers and their circus – quickly felt the sting of national, and even international embarrassment. The Auschwitz Museum tweeted its outrage. This was followed by everyone insisting this photo isn’t representative of the local population, as well as school officials promising to investigate and offer mandatory history lessons about Nazi Germany.

But what really happened? Student Brock Turkington said it started when the photographer said, “Do a high sign. And nobody really knew what a high sign was. We never heard of it. And he demonstrated by sticking his arm up, kind of what the salute looked like. So we all imitated it.”

When Turkington saw the photo later, he winced at what it looked like. “It was just miscommunication, like we were told to do one thing and he demonstrated it badly and we all just kind of followed along because we wanted to get the pictures over with,” he said. “In this picture are many of my friends that I know are not racist and do not hold Nazi views.”

The photographer, Pete Gust, who had a son in the picture, told news outlets “There was no Nazi salute. The last picture that we did, I'd said to them, ‘Okay, boys, you're going to say goodbye to your parents, so wave.’”

Why did everyone in the national media rush to assume the worst, and end up with....fake news? There’s an easy guess.

The Associated Press quickly found Baraboo’s state senator Joe Erpenbach who blamed....the rhetoric of President Trump. “There's no room in the world for anything like that at all. From what they're seeing out of the White House, that it's OK to be intolerant and racist.”

In today’s America, the “objective” press is looking for racist neo-Nazis under every rock that doesn’t submit to the will of The Resistance. But these same outlets refuse to condemn the ongoing attachment of leftists and Democrats to the anti-Semitic Rev. Louis Farrakhan, whether the politicians photographed with him are Maxine Waters or Keith Ellison, or even Barack Obama. The scandal — among some of the most powerful adults in the land — is barely even recognized. CBS This Morning offered one brief anchor-read story earlier this year when an old smiling-Obama-with-Farrakhan photo surfaced after being suppressed for years. ABC and NBC slept on it.

None of these networks were outraged in September when Farrakhan sat on a dais of honorees during the blanket coverage of Aretha Franklin’s funeral, right next to Al Sharpton, Jesse Jackson, and Bill Clinton. Three days later, CBS and NBC reported there was "controversy," but they utterly skipped Farrakhan. Whoopi Goldberg on ABC’s The View told everyone to back off. “It's not about Bill Clinton or Louis Farrakhan. It was all about Aretha,” she ranted. “That's why everybody needs to pull back, just pull it back, you know, and understand that this is, we don't control everything.”