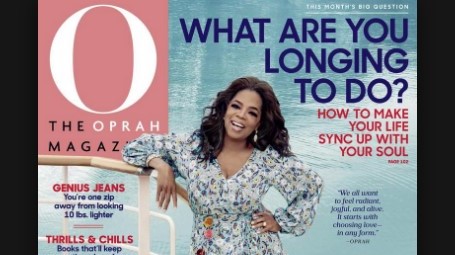 Over the years Oprah Winfrey has seemingly evolved into America’s Mom. After her TV career, Oprah sounds like an evangelist preaching a feminist substitute to replace religion in her monthly Oprah Magazine. Her August issue carries this motivational nugget of Oprah wisdom on the cover: “We all want to feel radiant, joyful, and alive. It starts with choosing love – in any form.” No mention of faith, but no surprise there.

How to feel "radiant, joyful, and alive"? Oprah has the answer. In this very issue, Oprah devotes a full-page ad to promote -- ready? -- the hashtag "ShoutYourAbortion." According to Oprah Winfrey, a good way to show you're "choosing love" is to murder your baby.

This is a major reason most women don’t accept the term “feminist.” A new poll by the feminist site Refinery29 and CBS found 54 percent of millennial women do not describe themselves as “feminists.” Of women over 35, only 36 percent identify as feminist. If you’re not a radical leftist, you decline the term. Only someone truly evil feels joy about an abortion, regardless of her (or his) position or predicament.

But Oprah Magazine’s editors put this under the category of “Inspiration.” Amelia Bonow was so horrified at the prospect of taking taxpayer funding away from the Democratic Party underwriters at Planned Parenthood that she touted and shouted her abortion, and now the hashtag has been “tweeted more than 300,000 times.” Ironically, that’s about a tweet for every life ended before it began in an average year of Planned Parenthood business.

This is not just a hashtag, but an entire Twitter account and a website with video testimonials. One video is headlined “My abortion was gentle, irreverent, and empowering.” Gentle….for whom? Irreverent, empowering....for whom?

A woman from Seattle with badly overdone makeup and green hair discusses her three-day pharmaceutical abortion as not just “gentle” and “spiritually empowering,” but as “loving” and “joyful,” and of course, “badass.” She explains how during this drawn-out procedure, she got drunk and had “brutal sex,” which “you’re not supposed to do.” Somehow it wasn’t in the headline that she summarized it all as “some female power-witchy s—t.”

The viewer is also treated to ten gallons of the usual “pro-choice” boilerplate. It’s “like going to the dentist.” It’s not a difficult decision when a woman is “very single” so she avoids ever getting “emotionally complicated.” When you’re “very spiritual but not religious,” an abortion is “something of a “sacred act” of “taking one’s power,” a “sacred taking of agency.”

It's sacred. Ponder that.

After these vague declarations of feminist dogma, the woman documents the entire abortion process. She shoves her urine sample into the camera, but wouldn’t show her ultrasound. “I didn’t look at it...I didn’t look at the little speck,” she declares. They told her the pregnancy wasn’t far along – four weeks, six days. “I caught it early. I say it like a disease!”

At the end of the video, you hear the woman humming, and this text comes on screen. “I never did think of the cell cluster as ‘my baby,’ nor the sperm donor as ‘the father.’ My whole view on the thing was quite neutral. Scientific,” she claimed. Somehow it’s “neutral” and “scientific” to deny the humanity of “the thing.”

But behind this “science,” emotion dribbled out, and a sense of gravity. The video ended with this text: “It was a full moon, and I’m a sentimental, spiritual type. So I sang a song to the spark. I let go of you with love tomorrow.”

George Orwell, call your office. An abortion is “letting go of the baby with love.” That inspirational message of “female empowerment” is brought to you by Oprah and her magazine.

We cannot avoid this truth: it is Satanic. And if you think it's not, then please tell us what is.