Liberal journalists have spilled a whole lot of ink in the Trump era boasting how they've suffered watching a week or so of Fox News programming to explore the strange informational terrain of the Trump voter. They pompously proclaim it’s television for your crazy Uncle Frank, pushing conspiracy theories for dumb people while nurturing resentments toward the elites -- meaning, of course, them. 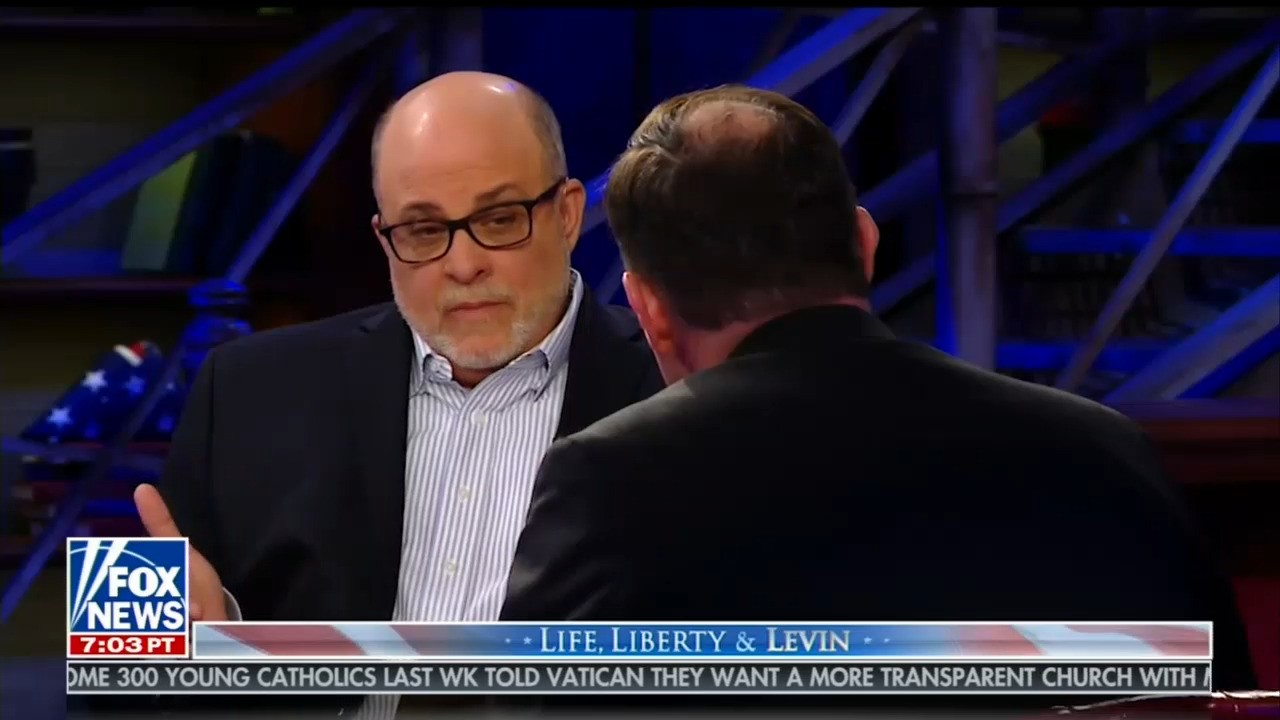 That nasty cartoon is rebutted by a new Fox News program, Life Liberty & Levin, hosted by Mark Levin. It is more intellectual than anything produced on ABC, NBC, CBS, CNN, or MSNBC. Nothing they have on air comes even close.  For an hour, at 10 pm Eastern time on Sunday nights, Levin interviews one guest -- remember that? -- drilling deep to explore how the guest has worked to protect and preserve the principles of freedom. It’s substance over sizzle. It serves to enlighten, not entertain. It is serious programming, so the liberal critics have demeaned it as a “glacial slog.”

It takes a nano-second for Levin to go further than today's typically superficial television interview.  He begins by reviewing his guest’s biography, and viewers may learn a tidbit that immediately puts his guest's career in its proper perspective. Sen. Mike Lee is the son of former solicitor general Rex Lee, and gained his interest in politics by watching his father work in court. Levin told viewers that he was graduated from the same high school in the Philadelphia area as Israeli Prime Minister Benjamin Netanyahu (at a different time), and that Netanyahu spent a year after college working at the same consulting firm as Mitt Romney. With just those two introductory nuggets, Levin has transcended the claptrap one hears from the elites at CNN or MSNBC.

The series began with an interview of economics professor and columnist Walter Williams, a true icon in his field and one we believe, like Thomas Sowell, has been insulted throughout his career (he's too much of a gentleman to say so himself) by so often being typecast by the media as an expert "black economist," as if that was a (take your pick) notable or limiting descriptor.  You doubt us? Google that term and you'll find his name. Google only "economists" and you'll find a list of the top 54 economists, and he's not on it.  Levin put him front and center, where he belongs.  A question and an answer you'll never find on the other networks: Levin asked if liberty has the seeds of its own demise in it;  Williams responded by explaining how tyrants always welcome freedom of speech to get their foot in the door only to undermine others' freedom of speech.

The episode might remind older viewers of Milton Friedman interviews back in the Eighties on his PBS series Free to Choose. It will remind you of absolutely nothing anywhere on television today.

How about Levin digging into matters like the meaning behind the words in the Declaration of Independence, of natural law and inalienable rights, with Dr. Larry Arnn, the president of Hillsdale College? They discussed how progressives undermine America's founding principles, with  Dr. Arnn expertly putting matters in their proper perspective. “The first thing that happens is that they start writing about this Declaration of Independence – ‘it was really good for the time, but not relevant anymore, ’"he explained, "and that won't work, by the way, because if the Declaration is false now, it was false then by its own terms, right?”

Liberals also peg Fox News as toeing the Trump line, 24/7. That’s certainly not true of Levin. He and several of his guests in the last few weeks have brutally pounded on the Republican leadership for passing a 2,200-page monstrosity of an omnibus spending bill, and passing it with absolutely no time for members of Congress to actually read (never mind debate) it first.

One of those guests was former Attorney General Ed Meese, Levin’s old boss in the Reagan years.  On the other hand, Meese also praised Trump’s judicial appointments as “outstanding,” praising Trump for selecting judges that adhere to the Constitution as well as for consulting the Federalist Society and the Heritage Foundation.  It's the kind of discussion those dumb conservatives want to hear and the elites don't want dumb conservatives to hear.

Millions of Americans have enjoyed Levin’s books on liberty and tyranny, and now it’s possible to get some of that wisdom every Sunday on cable TV. All credit should go to Fox News for daring to put a calm hour of serious talk about political philosophy on the air.