The liberal narrative on Donald Trump assumes his election was evidence that America is returning to its racist roots. In the angst-ridden aftermath, the media found vindication by reporting all kinds of “hate crime” incidents, lurching so eagerly that they fell for a few that turned out to be hoaxes. Any media outlet that leaps on a small incident of vandalism as a grand statement on Where America Stands ought to have the courage to acknowledge publicly when the story is fraudulent. To do otherwise is to stoke racial fires with dishonesty.

And that’s precisely what they’re doing. 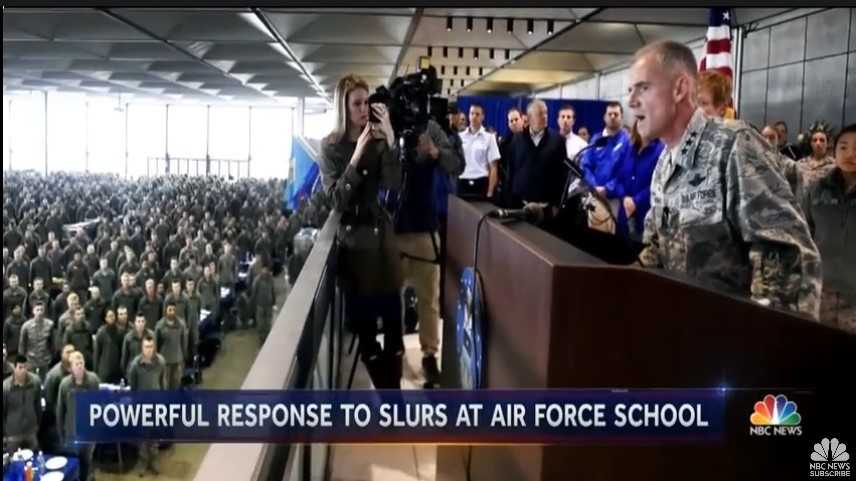 On September 29, a shocking story came out of Colorado Springs. Five black cadets at the Air Force Academy Preparatory School found racist messages written outside their rooms, like “Go home, (N-word).” The head of the Air Force Academy, Lt. Gen. Jay Silveria had the entire student body stand while he demanded that the racist perpetrator(s) should leave. It was humiliating. Put yourself in the shoes of the cadets forced to endure this tongue-lashing.

This turned into a national story. CNN’s Newsroom with Brooke Baldwin offered 11 minutes, with a news report and an interview with Silveria, and Erin Burnett Tonight added another seven with another Silveria interview. CBS Evening News offered two minutes and 45 seconds on it, and NBC Nightly News did two minutes. The PBS NewsHour offered a minute.

It confirmed a liberal narrative: the U.S military has a racism problem. But on November 8, the Academy reported that one of the black cadet “victims” had written the messages. It was a hoax. A vicious, ugly hoax. Some of the news outlets reported this. CNN’s Brooke Baldwin offered three minutes, but not the Erin Burnett program. PBS gave it 22 seconds. But CBS and NBC couldn’t find the time. They were comfortable just leaving the Fake News of racism uncorrected.

At Kansas State University, Dauntarius Williams reported his car vandalized with “Go home, [N-word] boy” and other messages. The Kansas City Star reported the story on November 1, complete with a “students are fed up” headline and quoting an outraged black student who complained the college doesn’t have a “multicultural center on its campus.”

It was another lie. On November 6, Riley County police reported Williams confessed to the graffiti, and was not charged with filing a false report since he “expressed sincere regret that his actions had resulted in the negative media attention that resulted.” Williams said “It was just a Halloween prank that got out of hand.” Williams had called the Star after the incident and said he was a Kansas State student. He lied about that, too.

On November 10, 19-year-old Yasmin Seweid pleaded guilty to lying to police last December when she claimed that she had been harassed by drunk white men on the New York City subway who yelled anti-Islam slurs and chants of “Donald Trump!” CBSNews.com, The New York Daily News and BuzzFeed all fell for it.

On Fox’s The Five, Greg Gutfeld blasted BuzzFeed for their response to the hoax. The headline was “Woman Arrested For Allegedly Making Up Story of NY Subway Attack by Trump Supporters.” Now compare that to the original BuzzFeed headline of the incident: "Drunk Men Yelling Donald Trump Attempt to Remove Woman's Hijab on NYC Subway." There was no “allegedly.” According to BuzzFeed’s headline, the hoax itself was “alleged” and might be real. Even today, while their stories admit the reality, the awful headlines keep lying.

And then the press wonders why America has more trust in used car salesmen.