Bozell & Graham Column: The Fusion of Reporting and 'Oppo'

On October 24, The Washington Post reported that Hillary Clinton’s campaign and the Democratic National Committee hired the opposition research firm Fusion GPS to dig up dirt on Donald Trump. The firm then retained former British intelligence operative Christopher Steele, who assembled a dubious dossier (complete with prostitute rumors) from his Russian contacts.

This, in one compact story, should have seriously undermined months of wildly speculative reporting on the Trump campaign seeking dirt on Hillary Clinton from the Russians, with the Democrats warning of “treason.” Even with the Manafort indictment, there’s still not a scintilla of evidence of Russia-Trump collusion. But looking like hypocrites, indulging deeply in a double standard, never slows these “news” reporters down.

The Daily Caller hints at a deeper angle, and it calls into question the media’s sermons on transparency.

CNN’s justice correspondent Evan Perez hyped this dossier assembled by Fusion GPS, but Perez and CNN never told viewers that Perez worked closely for years with the founders of this firm in a previous job. 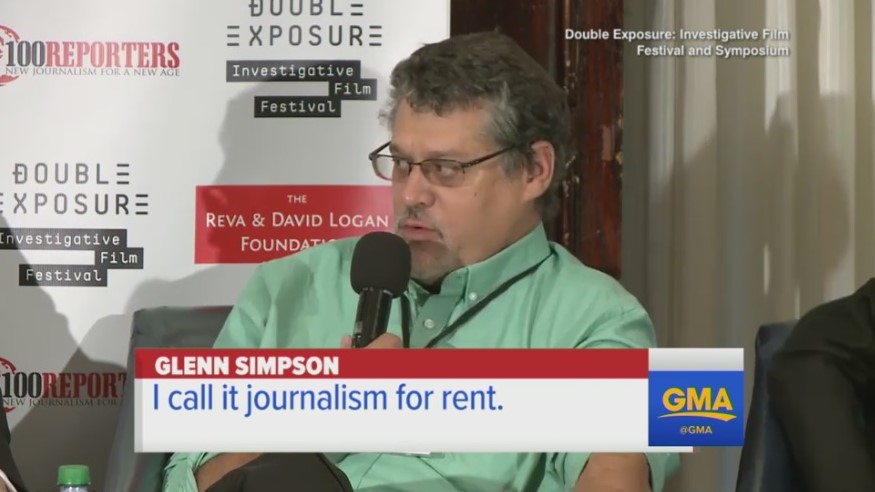 Glenn Simpson, the Fusion co-founder “most often associated with the dossier,” worked on the same reporting staff as Perez at The Wall Street Journal. They regularly co-authored stories.

A third co-founder, Tom Catan, was also a Journal reporter in the same time frame. The Caller showed Facebook photos of these men still going to baseball games and fishing vacations together.

CNN’s anti-Trump stories have hidden all this behind a wall of “anonymous sources.” This is one dreadfully serious reason why the American people don’t trust “investigative reporting.” In reality, it turns out it looks like a series of chummy hand-offs, funded by Trump opponents.

“Pro-Clinton political activism” and “news reporters” are one and the same thing.

“News” is being assembled and colored by personal transactions between old friends and/or political allies. There’s a lot of horse-trading and glad-handing in the “news” process that they hide through their opaque sourcing techniques.

To be fair and balanced on this ethical front, the conservative Washington Free Beacon website also retained Fusion GPS for research – for a few months before the Clinton campaign and the DNC – and the Daily Caller reported that they also reported on Fusion GPS without acknowledging a relationship.

Campaigns for decades now have been ravenous for “opposition research” – combing over a candidate’s decades of policy positions, speeches, and personal behavior, looking for something damaging that can change a political trajectory. Candidates and political parties pay for it, but the investigative reporters are also doing it.

In the Trump era, reporting and “opposition research” have become one and the same. The Clinton campaign and the DNC paid former reporters to find a gold mine in Russia. Why go the expense? Hundreds of liberal reporters helped the Democrats at no charge. The public needs to be skeptical about just how ethical they are in organizing scoops behind the scenes.