While most of America was transfixed by Game 7 of that World Series, the Fox News Channel was doggedly pursuing a new story: The FBI’s probe into pay-for-play schemes at the Clinton Foundation and the State Department has been far more expansive than anyone reported so far and has been going on for more than a year. FBI sources even warned there could be indictments down the road. 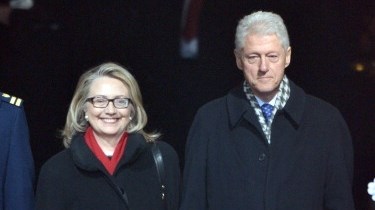 Then The Wall Street Journal broke another new story online that “Secret recordings of a suspect talking about the Clinton Foundation fueled an internal battle between FBI agents who wanted to pursue the case and corruption prosecutors who viewed the statements as worthless hearsay.” Senior officials wanted to tell FBI agents to “stand down” from a Clinton Foundation probe.

Two nuclear explosions in one night. Reaction from the news media? Crickets.

The stench of corruption between the Justice Department, the State Department and the Clinton Foundation machine is noxious. Add the leftist ‘news’ media collusion and it becomes  overpowering. This is a cover-up.

No one at the networks was breaking into the World Series. No one at ABC, CBS, and NBC  could locate the story and offer even the briefest summary the next morning.. MSNBC’s Mika Brzezinski offered a serious report early on “Morning Joe,” but she was alone. The other “news” programs preferred the distraction of breathless baseball updates.

The worst moment came on ABC’s “Good Morning America,” where they acted like the story did not exist, period. Pollster Matthew Dowd said a scandal story might still break: “So anything can happen in that regard.” Sounding totally oblivious to the breaking news, co-host George Stephanopoulos replied: “We’ll see if some big news comes out.”

At taxpayer-funded National Public Radio, “Morning Edition” found anything and everything else more interesting and “newsworthy,” including – we’re not kidding – “teen night owls” who need later school starting times and the perils of the illegal human-kidney trade in Pakistan.

The network blackout so far on this FBI probe is beyond the pale. Everyone knows what would be the media reaction were there a report about likely indictments related to the Trump Foundation. There would be an immediate flash mob of reporters camped in front of Trump Tower breaking away from regularly-scheduled programming and offering play-by-play commentary. Anyone denying the double standard is lying.

This is just the latest Clinton-scandal scoop out of hundreds over the last 24 years that the networks have skipped, or downplayed, or just dismissed as toxic waste. This is why an overwhelming majority of Americans tell pollsters it’s obvious the media are undisguised Hillary boosters. Their credibility is shot with the public.

Within 18 hours, MSNBC’s Andrea Mitchell was bizarrely denying there was any story or any investigation worth noting. “She's not under criminal investigation. In fact, it's not an investigation. It's just a review of the e-mails. She did not lie to the FBI, according to James Comey. There was no grounds to prosecute her. So there are no lies, there’s no criminality.”

This is the kind of spin you expect from defense attorneys, not reporters.

It’s sinking in across America that our “news” media are not First Amendment heroes or watchdogs of government. Many of them are coddling deeply corrupt politicians and denying any evidence that these people have been engaged in what appears to be a criminal conspiracy to enrich themselves using the federal government.

We are looking right down the barrel of the greatest government crisis since the Civil War, with charges – like handing over our uranium mining capacity to the Russians – that could possibly reach the height of treason itself.