When The Washington Post puts its top investigative reporters on the beat of the distant youth of presidential candidates, there's no telling what student scandal that they might uncover. In 2012, the Post devoted a 5,400-word front-page article to breaking the news that at 17, "Romney's pranks could go too far." He was accused of giving a classmate at Cranbrook Academy an involuntary haircut, and this was invested with deep meaning across his life.

Sometimes, however, the investigation has a different result. On August 15, 2016, the Post once again displayed on the front page the labor of its hard-boiled, first-draft historians, again dwelling on a school scene in Massachusetts. This time, the subject was a Democrat and the headline reflected it: "At Wellesley, fiery speech was a breakout moment." 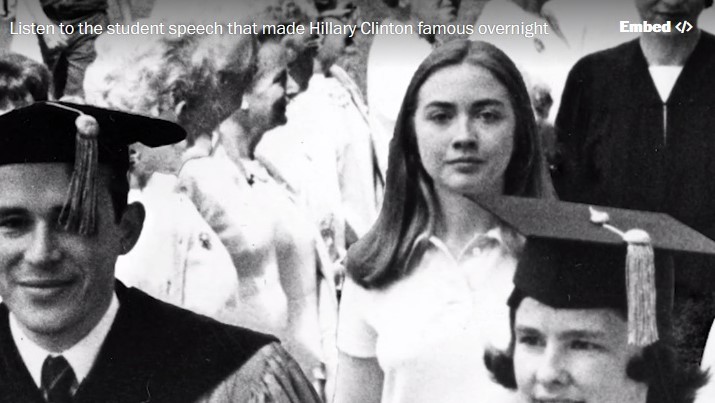 In 1969, Hillary Rodham Clinton gave a commencement speech insulting liberal Republican Sen. Edward Brooke as too conservative, too out of touch. It was a "moment of glory," the Post proclaimed, the culmination of what "her campaign now describes as social justice activism."

In summation, young Republican Mitt Romney was the worst kind of pampered prep-school bully. Young Democrat Hillary Rodham was a "provocative voice speaking for her angry generation." If partisan profiling was illegal, these journalists would be arrested.

Reporters Frances Stead Sellers and Marilyn Thompson gushed that "Clinton's remarks transformed her, virtually overnight, into a national symbol of student activism. Wire services blasted out her remarks, and Life magazine featured a photo of her, dressed in bold striped bell-bottoms."

Sellers and Thompson weren't digging up dirt. They were creating a sugary-sweet valentine, looking at old pictures and seeking out Hillary pals for the warmest recollections to fill the narrative. In Brooke's archived papers, the reporters dug up a letter from Wellesley president Ruth Adams on June 5, 1969, apologizing for Hillary's public rebuke. "Courtesy is not one of the stronger virtues of the young." But how do we harness such "youthful passion," Adams asked, "without destroying the basic fabric of our democratic society?"

More than 40 years later, the Post is performing damage control.

While the Post would have you believe Romney's youth displayed only a mean streak, Hillary's "knack for public speaking was obvious to anyone who saw her onstage at an outdoor demonstration in her sophomore year." A former professor oozed "She had this formidable quality of poise, of self-control, of self-containment."

The Post even found and posted audio of the speech. It doesn't display a formidable public speaker. Instead, it reveals a callow young woman saying idealistic things that don't sound anything like the hardened Hillary we know today. Get a load of this line from the lady with a $10 million family income on the latest tax return: "But there are some things we feel, feeling that a prevailing acquisitive and competitive corporate life, including tragically the universities, is not the way of life for us."

Hillary also uncorked weird Sixties boilerplate about the young people "searching for a more immediate, ecstatic, and penetrating mode of living." She concluded by reading a poem about how "the hollow men of anger and bitterness, the bountiful ladies of righteous degradation, all must be left to a bygone age."

People of the world - or at least, students of Wellesley - unite!

The Post should have asked her old professors and classmates what on Earth this claptrap meant. Even better they could have asked her. But inside the media bubble, they can't contemplate what people who don't love Hillary might make of this speech, and can't imagine how many don't swoon over a lecturing "social justice warrior" in striped bell bottoms.