Bozell: Hold the Righteous Indignation About 'Trump's Tirade' on the Media 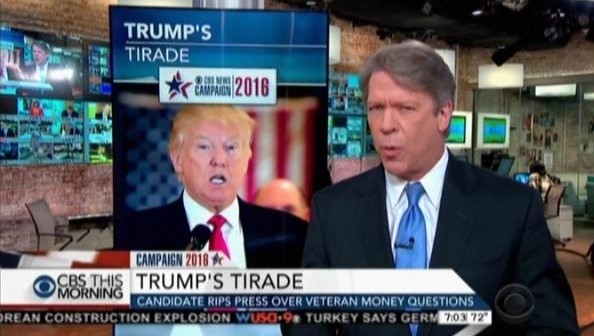 Donald Trump held a press conference on Tuesday to address (and insult) news reporters trying to locate the proceeds for a January fundraising event for veterans Trump held -- during a Republican debate on Fox News he refused to attend. The press called the insults a "tirade."

The media were right to ask questions about Trump's distribution of funds to veterans groups. But hold the righteous indignation, folks. This is a press corps that has absolutely refused to hold Obama accountable for anything (think: IRS, VA , Solyndra, Fast and Furious and so many other scandals) while also refusing to investigate any clouds swirling around Hillary Clinton (think: Benghazi, Clinton Foundation, email scandals, etc.).

Indeed, it's a courtesy reserved for both Clintons, going back to the very beginning of their national careers (think: Whitewater, Filegate, Troopergate, Kathleen Willey, Paula Jones, and the rape of Juanita Broaddrick, to name but a few unsolved mysteries because no one in the press wanted to investigate them).

Every single one of these scandals is more important than the disposition of funds from a fundraiser, and it must be noted that Trump did account for the millions he raised and contributed. When the media begin to ask serious questions of Hillary Clinton, then and only then will they have the right to pass judgment on Donald Trump.