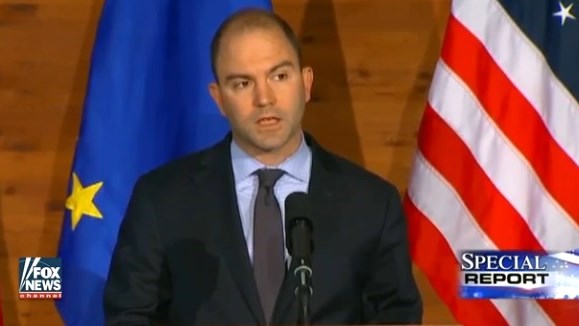 Barack Obama’s political appointees are not only celebrated by the media as the best and brightest America has to offer. They are promoted as so bright they are allowed to boast about how they masterfully manipulate the press, like sculpting a smelly can of journalistic Play-Doh.

The New York Times Magazine wrote a long profile of Obama’s foreign-policy communications whiz Ben Rhodes, lauded as “the master shaper and retailer of Obama's foreign-policy narratives, at a time when the killer wave of social media has washed away the sand castles of the traditional press.”

Don’t blame social media for the traditional media’s adoration of Obama. “Rhodes has become adept at ventriloquizing many people at once,” wrote David Samuels for the Times. First these ventriloquists enter the briefing rooms to dazzle and deceive the dedicated journalists on those beats, and then there are the “force multipliers” – described as “prominent Washington reporters and columnists who often tweet in sync with White House messaging.”

In short, Rhodes declared, “we created an echo chamber.”

Rhodes exploited the fact that as the TV networks and newspapers close foreign bureaus and economize on staff, the gray beards are gone. "They call us [at the White House] to explain to them what's happening in Moscow and Cairo,” Rhodes proclaimed. “Most of the outlets are reporting on world events from Washington. The average reporter we talk to is 27 years old, and their only reporting experience consists of being around political campaigns. That's a sea change. They literally know nothing.”

Exhibit A for the “master shaper” Rhodes bending the press to Obama’s will was the Iran arms deal. The Times explained that the Obama people exploited the press by pretending the 2013 election of prime minister Hassan Rouhani and a “moderate” regime presented a brand-new opportunity to strike an Iran deal. But in reality, the Obama negotiators began talking to Iran in July of 2012, before this false narrative entered that echo chamber. Polls showed the American public didn’t like the Iran deal, but the media just shouted over them with recycled Obama lingo about the “historic” and “landmark” agreement.

Exhibit B wasn’t mentioned by the Times: the death of four Americans at Benghazi. In 2012, Rhodes easily “ventriloquized” the media with the bizarre spin that the U.S. consulate wasn’t subjected to a terrorist attack, but suffered from a spontaneous protest over a YouTube video mocking the prophet Muhammad. Even after Team Obama was forced to relent on this blatantly false talking point, the ventriloquist dummies wouldn’t focus on how they had been used.

Over on Fox News, diplomatic correspondent James Rosen told host Bill O’Reilly the State Department blatantly lied to him when he asked about the negotiating timeline.

“I can attest directly that the Obama administration in the person of then-State Department spokeswoman Victoria Nuland, of whom I am very fond, Bill, flat-out lied to me in February 2013,” Rosen said. “I asked, point blank, ‘Are there any direct talks going on between the U.S. and Iran of any kind?’ And she said no, at a point when those talks had been ongoing for eight months.”

The next step naturally followed. The other networks all ignored the kerfuffle over the Rhodes boasts as some sort of inside-the-Beltway snoozefest. The last thing a supine media wants to report is just how supine it is – even when the accuser is the liberal “master shaper and retailer of Obama’s narratives.”