The National Enquirer’s brand in journalism is synonymous with factually unsupported drivel of the lowest kind. It is a sacred truth that no responsible journalist should produce the kind of garbage found in this tabloid.

But somehow it’s perfectly appropriate for the same responsible journalists to report the sleaze, over and over, emphasizing, of course, that the source is that awful National Enquirer. 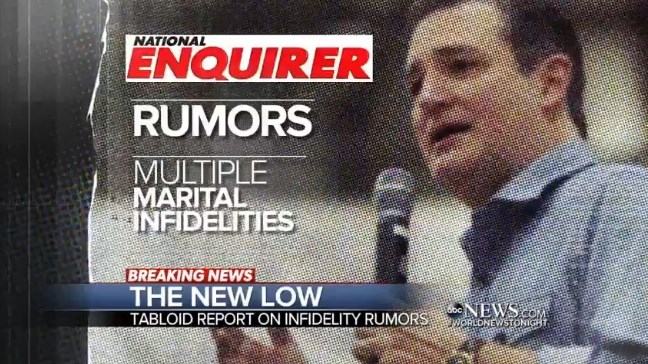 This is what the networks have done to Ted Cruz, who the Enquirer claims had affairs with five “secret mistresses,” including Trump spokeswoman Katrina Pierson. The unsubstantiated smear should have never seen the light of day. Instead it became national news. It began with ABC and NBC on Friday night, March 25. CBS followed on Saturday. From Friday through Monday, the networks devoted 15 minutes and 27 seconds of air time to this character assassination campaign pushed by former Trump strategist Roger Stone and published by a rag that coincidentally has also endorsed The Donald.

They sneered at the smear as they spread it. “The New Low: Tabloid Report on Infidelity Rumors,” read ABC’s caption on Friday night. ABC allowed Trump to tout the Enquirer’s credibility as greater than Cruz’s: “Cruz’s problem with the National Enquirer is his and his alone, and while they were right about O.J. Simpson, John Edwards and many others, I certainly hope they are not right about Lyin’ Ted Cruz.”

By Saturday morning, ABC’s Devin Dwyer broke out a sermon lumping the victim and the victimizer together into a unified mess: “On one of the most solemn days of the year for Christians, Good Friday, the Republican front-runners descended into a battle over sleaze.”

NBC’s Hallie Jackson spread the smear even as she identified it as evidence-free trash: “The tabloid provided no evidence to back up its claims. The only person quoted: Roger Stone, a controversial former Trump adviser who left the campaign last year, telling NBC he’s not the source of the story.”

ABC was still cranking away on Monday morning. Good Morning America co-host Robin Roberts warned “The war over wives, hitting a breaking point.” Guest co-host David Muir asked analyst Matt Dowd “Any question in your mind that this is the new low point in this race?”

Don’t shoot the messenger. But when the messenger is peddling lies, blast it. Such arrogance. The media elite act like they are blameless. But they are shameless.

They are also two-faced on another level. In October 2007, the National Enquirer began reporting that John Edwards was cheating on his cancer-stricken wife with an unnamed campaign staffer. But Edwards was a Democrat, so none of the three networks or the national newspapers touched it.

In December 2007, the Enquirer showed pictures of a pregnant Rielle Hunter, who’d moved to a gated community in North Carolina, with an Edwards staffer named Andrew Young claiming paternity. Asked by Don Imus on MSNBC about the Enquirer, CBS veteran Bob Schieffer announced “this will be a story we will be avoiding.”

It was only when the Enquirer caught Edwards trying to visit Hunter and her child at a hotel in July of 2008 that it became dreadfully obvious to everyone this was that very rare real story. Even then, they waited for Edwards to admit the affair on August 8 before touching it. Then they worked hard to bury it as irrelevant.

On the CBS show Sunday Morning, reporter Tracy Smith insisted “So it's going to be reported...But does America care at this point?...In a 2007 poll, 56 percent said it wouldn't matter to them if a presidential candidate had an extramarital affair."

Their interest in adultery doesn’t depend on whether it’s true or false. It’s only whether the candidate is a Republican or a Democrat.