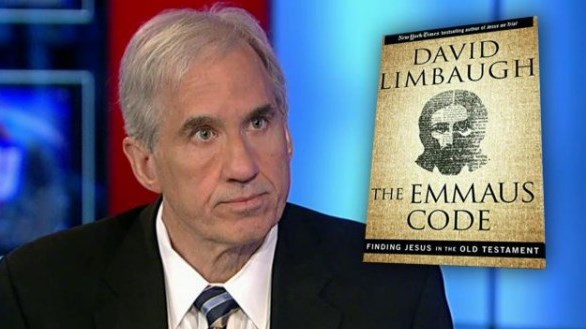 The Bible is the best-selling book of all time, but The New York Times would have to consign it to the ghetto for “Advice, How-To, and Miscellaneous” books. That’s what the Gray Lady has done to David Limbaugh and his new book, The Emmaus Code: Finding Jesus in the Old Testament.

Paul Bedard at the Washington Examiner revealed that on the newspaper’s November 29 best-seller chart, the Times didn’t put David Limbaugh’s book at number 8 on the nonfiction list, where it belonged. They set it aside in the "Advice, How-To, Miscellaneous" category.

Even there, the Times played games, Bedard reported. “In the most recent week, the Regnery-published book sold 9,642 copies. The New York Times best-seller list for advice put it at No. 5 even though it out-sold No. 4, ‘Big Magic,’ by 3,533 copies.”

It's also strange that Extreme Ownership by Jocko Willink and Leif Babin is on the nonfiction best-seller list, although the Times describes it as “applying the principles of Navy SEALs leadership training to any organization.” That sounds like an advice book.

Bedard also blew the whistle on the Times Book Review a year ago when Limbaugh’s first book on Christian apologetics debuted. They “banished conservative legal author David Limbaugh’s latest, Jesus on Trial, from its upcoming best-seller list despite having sales better than 17 other books on the list.”

Bedard also exposed the Times playing this game of “hide the conservative best-seller” with Dinesh D’Souza’s book America, a companion to his documentary of the same name.

This doesn’t even consider the Times actually reviewing a Limbaugh book. The Book Review crew beclowned themselves in September by assigning a reviewer to the latest book by that literary giant Kim Kardashian. It was titled Selfish, a picture book of her own selfies. But they never found someone to write about Mark Levin’s Plunder and Deceit as it sat in second place on the Nonfiction best-sellers list.

Not every best-seller gets a Times review, but it’s not hard to see the favoritism on any list. Books by liberal journalists Jon Meacham and Ted Koppel are reviewed, as are books by leftist radicals Gloria Steinem and Ta-Nehisi Coates. GOP presidential contenders Donald Trump and Ben Carson don’t get book reviews, and neither do Fox News hosts Bill O’Reilly and Brian Kilmeade. The reviews of conservative best-sellers would probably be vicious, but they might still be seen by the Times as a mistake – for suggesting the books matter.

This also happens with books on God and godlessness. A best-selling book on the Salem Witch trials is reviewed, but not David Limbaugh analyzing the Bible. The tastemakers at the Times have no interest in studying the Bible like a believer, exploring the old maxim of St. Augustine that “in the Old Testament, the New Testament is concealed; in the New Testament, the Old Testament is revealed.”

Instead, the Times assigned a review of Battling the Gods: Atheism in the Ancient World, by Tim Whitmarsh – not a best-seller, but pleasing fare for the secular fundamentalists. Reviewer Rebecca Newberger Goldstein blithely stated: “In the grip of religious conviction, a person will commit acts too horrific to otherwise contemplate.”

The Times doesn’t find the Bible to be a “good book,” so they can play cheating games with their best-seller list. They surely ignore Proverbs 19, which begins, “Better is the poor that walketh in his integrity, than he that is perverse in his lips, and is a fool.”