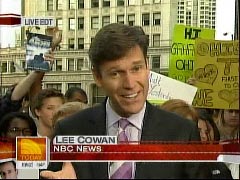 The day after Al Gore endorsed Barack Obama in Detroit, MSNBC kept repeating the allegedly big news with the on-air question "Will Gore Help or Hurt Obama?" Left out of that question: Who cares? Does Gore’s endorsement matter at all?

Pundits usually declare in today’s media-saturated world that endorsements from major politicians or movie stars just don’t have much impact. A Who’s Who of the Beautiful People in Hollywood endorsed and actively campaigned for John Kerry – and had no impact.

With Al Gore it’s the same thing. He doesn’t bring a single vote Obama doesn’t already have. He could have participated in the process but he waited until the primary challenge from Hillary was over. Now he supports Obama. Where in the world is the news there?

But this is Obama. Anything related to Obama which could be construed as helpful becomes news.

Look no further than Obama being endorsed by Ted Kennedy and Caroline Kennedy in January. ABC’s David Wright oozed "The audacity of hope had its rendezvous with destiny." CBS’s Harry Smith announced "In the civic religion that is Democratic politics, the most treasured covenant was passed to the young Senator from Illinois." NBC’s Lee Cowan proclaimed "The endorsement brought the Kennedy mystique to this campaign, not in a whisper, but a roar."

A few days later, Obama was trounced by Hillary in Kennedy’s home state of Massachusetts – by 16 points! – but the reporters who screamed like overly zealous bobby-soxers at an old Sinatra concert just shrugged.

Brit Hume reported afterward on Fox News that a national Rasmussen poll showed that just 30 percent said a Kennedy endorsement made them more likely to vote for Obama, while 33 percent said it had no impact and 34 percent said it actually made them less likely to go Obama. It was even worse when the pollster threw in independents and Republicans.

The media have worked hard to transform Al Gore into a global environmental hero, winner of every honor from the best-documentary Oscar to the Nobel Peace Prize. He’s certainly become enormously wealthy in this decade, wealthy enough to serve as a cartoon villain of soak-the-rich liberals from his energy-hogging mansion in Nashville. But do the media really care whether Gore’s alleged electricity will bring a charge to Obama? They’re going to proclaim one whether it ever happens or not. In fact, they already have.

On CNN, anchor Campbell Brown cranked up the hyperbole machine: "Tonight, everybody, he blew the roof off the joint. Al Gore, one of the last big-name Democrats, getting behind Barack Obama in a big way, making a speech that could have won him the White House if he'd been making this kind of speech eight years ago." Brown started pushing Gore as Obama’s running mate, and when gurus like David Gergen said it would never happen, she lamented: "Do I sound like I want it just too badly here, David? It's a good story."

TV anchors and reporters today are not role models for emotional detachment. They’re about as restrained in their love as Tom Cruise was on Oprah’s couch.

NBC's Lee Cowan trumpeted Gore’s nod live from the venue in Detroit: "He says he'll do whatever he can to make sure that Barack Obama gets elected President. He announced his decision today on his blog, e-mailing a very deep list of supporters telling them to get behind this ticket both with a little elbow grease and with a little money as well." Cowan suggested it was a big deal that Gore had never before on his website asked for campaign donations. He didn’t seem to check if that was true, or wonder if Gore’s website had many visitors. Facts might just get in the way of the drama.

On the "Today" show, Cowan grew even sillier, reporting in cheery tones that Gore "even humorously suggested that the pet food crisis last year, showed that the White House was in need of an overhaul." Gore joked "Even our dogs and cats have learned that elections matter."

In the New York Times, reporter Jeff Zeleny found no space for negative evaluations of Obama or Gore. Instead, Zeleny passed along how Obama smiled as Gore compared Obama to George Washington, Thomas Jefferson, James Madison, and Christopher Columbus, all of whom accomplished great things by their mid-forties.

It doesn’t matter to these reporters that Al Gore couldn’t even win his home state of Tennessee in 2000. It doesn’t matter that Gore’s 2004 endorsement of Howard Dean wasn’t exactly pixie dust. Every day, the media go looking for an opportunity to paint a moon and stars over Obama’s head and swoon at how they’re making "history" happen.