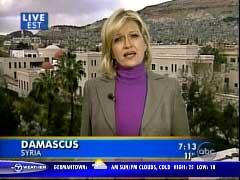 Never try to say ABC anchor Diane Sawyer hasn’t been tough on oppressors. In one interview in 1998, she stared one in the face and said, "You’ve been compared to Saddam Hussein. Nero. To Torquemada, who was head of the Inquisition."

Oh, forgive me. That wasn’t a dictator she was questioning. It was Kenneth Starr, the independent counsel investigating Bill Clinton’s lying under oath. This was a common practice for ABC at the time. Their website had an infamous instant poll asking if there was an "Ig-Nobel" prize, who should win it? The choices were Saddam, Slobodan Milosevic, Osama bin Laden and....Linda Tripp.

So how do ABC news anchors like Sawyer perform when they land "exclusive" interviews with actual dictators? The rings of international thugs are kissed for the privilege. Their obvious lack of respect for the concept of democracy is politely skimmed over. The real threat they pose to America is downplayed – or ignored.

Last fall, Diane Sawyer traveled to North Korea, and interviewed a general in the world’s harshest communist tyranny. She was an incredibly passive transmission belt, relating back to her American audience that the general insisted President Bush should be blamed for any nuclear weapons testing in North Korea, and added that "the General said to us, he does want peace. And he also said, again, reiterated, North Korea will not be the first to use a nuclear weapon." From there, Sawyer produced a very strange piece about regimented, yet refreshing North Korean school children, "a world away from the unruly individualism of any American school." Proclaimed a student, no doubt surrounded by minders watching her every word: "We are the happiest children in the world!"

Last week ABC and Sawyer were at it again. Another continent, another ruthless anti-American dictator, but the same results. This time, Sawyer flew to Syria, following in the footsteps of Sen. John Kerry, who warmly announced a few weeks back that dictator Bashar Assad is ready to work with the United States. That was exactly Sawyer’s message, too, on the February 5 "Good Morning America." Sawyer diplomatically awarded Assad the title of "President," although no one elected him there. Dictatorship was handed down as the family business, but she called him "Your Excellency."

She lamely suggested to Assad in the first day’s interview that "Americans would say they voted" in Iraq, that there’s a democracy. Assad shot back, "What is the benefit of democracy if you’re dead?" Sawyer didn’t challenge him, about say, his father Hafez Assad’s massacre at Hama of more than 10,000 people. She moved on instead to discuss gently how a peace process with America would work.

But the truly maddening part was Sawyer trying to take this dictator and turn him into a sympathetic human being. "You like video games?...Do you have an Ipod?" Obviously, she was slavishly toeing a PR line some Syrian functionary spoon-fed her. "You’re a country music fan. Faith Hill? Shania Twain?" Assad laughed and said, "Is it considered an ad?" Sawyer played along: "Yes, that’s true. They get free advertising." Yippee!

The problem here is the free advertising ABC is handing the dictator of Syria. Can we imagine that if Hitler were alive and still ruling Germany with an iron fist, Sawyer would be asking him about his Ipod, too?

On the second day, February 6, Sawyer asked the more serious questions, about political prisoners in Syria, about Syria’s role in assassinating Lebanese political leaders, its support for the terrorist groups Hezbollah and Hamas. But Sawyer had an odd tic throughout all of this, and it’s one that drives this writer mad. It was always "Americans say" or "human rights groups say" that Syria is unfree and supports terror, etc. Can’t the glorious fact-checkers at ABC News determine for themselves if Syria is oppressive? Or is an obsequious tone before dictators more important than giving American viewers the impression you have a firm grasp on hard facts?

Then, once again, after a few of those questions about democracy and terror, Sawyer went back to humanizing the Assads, not just the dictator, but the "elegant, athletic" dictator’s wife, Asma, the "31-year-old former career girl" who once lived in New York. What followed was a pathetic trail of ooze about the "amazing" work this woman is doing for women’s and children’s rights – in the middle of this dictatorship. We’re told the Assads "famously live in a modest home" and drive the kids to school, and bike together.

ABC famously forbids its reporters to wear flag pins, lest they be seen as tools of the U.S. government. But once again, in their frantic desperation to be "independent" of America, they look instead like enthusiastic apple-polishing tools for every dictatorial enemy America faces in the world.