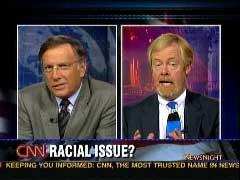 [Brent Baker posted this item on behalf of MRC President Brent Bozell to provide for a discussion on his blog page about his TV appearance.] On Tuesday's NewsNight, CNN anchor Aaron Brown set up an interview with Bozell by complaining that “we were called a 'race-baiter' by a conservative media Web site. Needless to say, we don't agree, which made our conversation with the piece's author, Brent Bozell, that much more interesting tonight.” Brown pleaded to Bozell: “Why do you call me, little old innocent me, you know, why do you call me a 'race-baiter' for asking the question [clip from an earlier show]: 'Do you think black America is sitting there thinking, “If these were middle class white people, there'd be cruise ships in New Orleans, not the Superdome”?"

In fact, the “race-baiter” formulation did not appear in Bozell's column, but was in a September 3 NewsBusters headline: “Race-Baiting by Blitzer and Brown; Race Raised by Williams and Koppel.”

Excerpts from the previous NewsBusters item and Bozell's column with which Brown took exception, plus a transcript of the September 13 CNN interview follow.

# “Race-Baiting by Blitzer and Brown; Race Raised by Williams and Koppel” read the headline over the September 3 NewsBusters posting. An excerpt:

CNN's Wolf Blitzer on Friday afternoon repeatedly prodded reluctant Congressional Black Caucus member Elijah Cummings to blame racism for delays in rescuing hurricane victims in New Orleans....Later, on CNN's NewsNight, Aaron Brown took up the same agenda with Congresswoman Stephanie Tubbs Jones: "What I'm wondering is, do you think black America's sitting there thinking, if these were middle class white people, there would be cruise ships in New Orleans?" When she wouldn't take the bait, Brown lectured: "Now, look, here's the question, okay? And then we'll end this. Do you think the reason that they're not there or the food is not there or the cruise ships aren't there or all this stuff that you believe should be there, isn't there, is a matter of race and/or class?"

# “Cheering on Racial Division” read the title over Bozell's September 7 column. An excerpt:

But perhaps the strongest news pitchman for the Vast Racist Conspiracy -- you know the one, like the skit on "Saturday Night Live" where Eddie Murphy paints himself white and they hand him free money at the bank -- was CNN anchor Aaron Brown. Brown baited Rep. Stephanie Tubbs Jones: "Do you think black America's sitting there thinking, if these were middle class white people, there would be cruise ships in New Orleans, not the Superdome?"

Jones tried to put race aside, focusing her outrage on charging "the government has not allocated the resources." But Brown went back to his Love Boat for Whites theme: "Now, look, here's the question, okay? And then we'll end this. Do you think the reason that they're not there or the food is not there or the cruise ships aren't there or all this stuff that you believe should be there, isn't this a matter of race and/or class?"

# A transcript, provided by the MRC's Brad Wilmouth, of Bozell's appearance, in a taped and edited interview, on the September 13 NewsNight with Aaron Brown on CNN:

Aaron Brown: "Of all the complicated questions the response to Katrina raises, questions of race and class in the country rank right at the top. We have on the program on three different occasions talked about issues of race and Katrina, and the other day we were called a 'race-baiter' by a conservative media Web site. Needless to say, we don't agree, which made our conversation with the piece's author, Brent Bozell, that much more interesting tonight.

"Brent, just dealing with the column you wrote on the 7th, the other day, to me, a fair reading of the column is that you don't want us to talk about race at all, probably class at all, but surely not race at all, as it may or may not relate to people's perceptions of the relief effort."

Brent Bozell: "Well, I think the problem is that these perceptions -- which are wholly false -- are being created on the one hand by demagogues, and on the other hand, by some in the media who are giving the demagogues a hearing on this. The fact of the matter is that two-thirds of New Orleans is black. Katrina didn't aim for that, nor was the federal relief response, as inadequate as it was, inadequate because they were blacks, you know. In 1992, Hurricane Andrew decimated the East Coast. The response from the federal government was terrible. It was mostly whites. Was that racism?"

Brown: "You've decided, which is absolutely your right, that there is no, there is no truth to anyone's belief that race is somehow involved in how people were treated in the week after the hurricane. Fair enough. I don't disagree with that. But perception is powerful and perception is important, and what we know from polls is that black Americans do look at this differently than white Americans as they look at a lot of things differently from white America."

Bozell: "And, Aaron, perception is dangerous if it's not rooted in reality, which is my point. If anyone had come forward in the last 15 days with any tangible proof to back up the suggestion that there may have been racism at place, I'd like to hear it, and then report it. But there's no evidence. It's just this accusation that's being thrown out. What I see is whites and blacks helping each other in New Orleans. I don't see any racism."

Brown: "I don't support the notion that race, as such, is the issue here, though. I'm less sure honestly about class. I wonder the degree to which class played a role in how the government responded, governments plural, responded. I don't know. But I am interested in what people think, and I think it's my job to ask."

Bozell: "Well, but, you know, it is appropriate to ask, Aaron. I don't question that, but when someone is making a very dangerous accusation, and by dangerous, I mean an accusation that splits the seam of the cultural fabric in this country."

Brown, to Congresswoman Stephanie Tubbs Jones, in a clip from his September 2 show: "Do you think black America is sitting there thinking, 'If these were middle class white people, there'd be cruise ships in New Orleans, not the Superdome'?"

Brown: "So journalists ought not ask these because their questions are perceived as statements?"

Bozell: "I think journalists ought to be careful that they not create perceptions that are based on falsehoods."

Brown: "How do you know it's perceived based on a falsehood unless you ask questions?"

Brown: "No one's, no, Brent, there's no accusation there."

Bozell: "There are public policy leaders in New Orleans right now -- and they've been there for a week -- who have been making this accusation. I'm not saying the press is. I'm saying they are. But if the press's role, I think, ought to be to go to those people and say put up or shut up."

Brown: "I think it is the role of the reporter to ask the question, even when the question is uncomfortable, and here I think that's all we did."

Bozell: "Well, Aaron, when I see a reporter say those infamous words, 'some people say,' and then you go on to continue with the sentence, I'm always wondering who those 'some people' are. You know, if somebody's saying something, put that person's name on the record."

Brown: "I actually think it's possible this is, be a moment for us."

Brown: "There really is an opportunity to discuss a complicated and important American question about race and class and poverty and how they fit together. And Katrina gives us that opportunity."

Brown: "I'll give you the last word on that."

Brown: "It's nice to see you."
Hurricane Katrina Newsnight