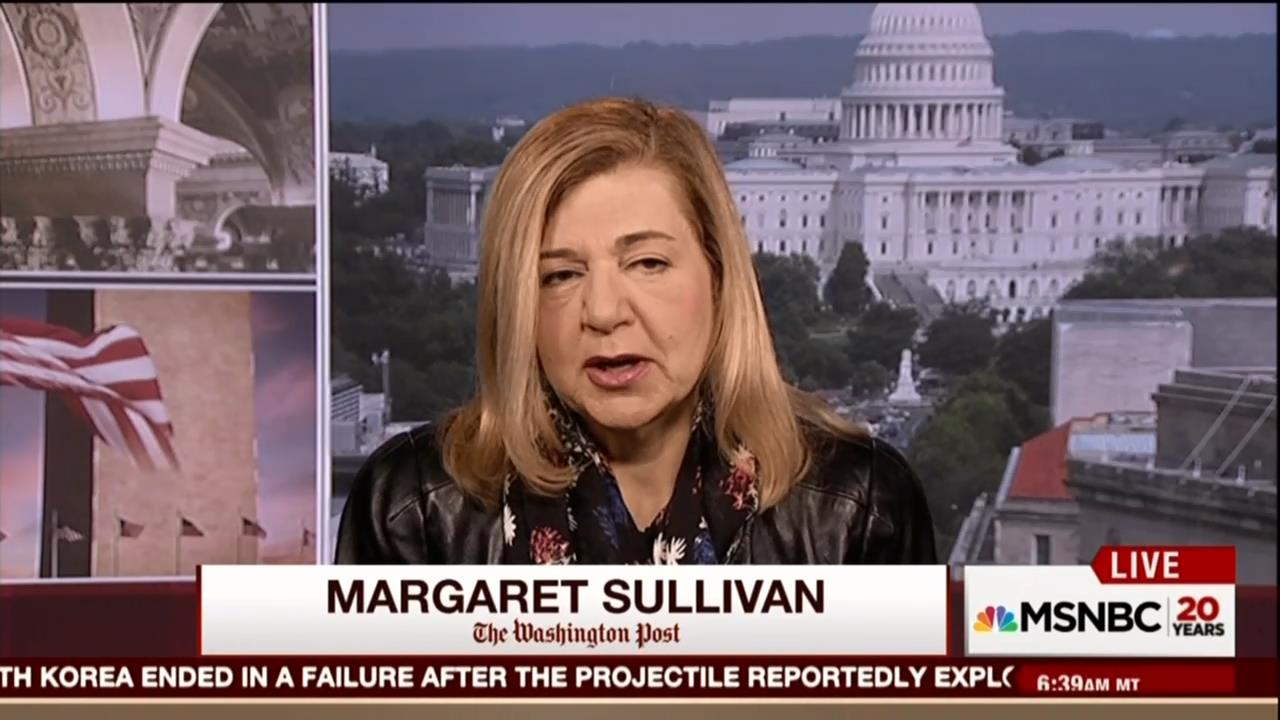 For Monday’s newspaper, Washington Post media columnist Margaret Sullivan put together a list of the thirteen “best” media moments of the campaign. Ten of the thirteen – surprise, surprise – were stories meant to undermine Donald Trump. Only one of the thirteen was harmful to Hillary Clinton and two were arguably neutral.

Sullivan should recognize her own bias and how her distorted view reflects the media’s widespread disdain for Trump. After all, in early October, she conceded the news media’s hostility to Trump, “a kind of way of thinking that many members of the media share” which “creeps into certainly commentary and sometimes it creeps into news story.”

Before joining the Post earlier this year, Sullivan served as public editor at the New York Times.

For her November 7 “Style” section column, “It wasn’t all bad: Here were the media’s 13 best moments of Campaign 2016,” Sullivan listed “moments that stand out in a positive way,” starting with “Katy Tur’s glorious pushback” against Trump’s “birtherism.”

She moved on to hailing “Susanne Craig’s mail call,” a reference to the New York Times correspondent who published Trump’s stolen tax return, following by touting left-wing comedian “John Oliver’s raisins of false equivalence.” Specifically: “The HBO comic commentator used small shriveled fruit to show the difference between Hillary Clinton’s foibles and those of her foe: a small pile vs. an avalanche. The sight gag made a powerful argument.”

She soon praised a colleague: “David Fahrenthold. The Washington Post journalist broke story after story about Trump’s claims of giving to charity.”

Next, “Andrew Kaczynski’s audio discovery” of “a recording of Trump on Howard Stern’s show in 2002 saying he thought the U.S. invasion of Iraq was a pretty good idea,” audio she ludicrously maintained gave “the lie to Trump’s claims of opposing it from the beginning.”

Also among her favorite ten hits on Trump: “Chris Matthews’s abortion interrogation” of the Republican nominee, “Tom Brokaw’s essay on Trump’s Muslim ban,” “Megyn Kelly’s tough debate question” and, while conservatives were appalled by the leftists agenda of the debate moderators, Sullivan was impressed by “Martha Raddatz’s School of Foreign Policy.” Raddatz, of course, “corrected” Trump.

A quibble over a fairly minor issue also made her “best” list: “Brian Stelter’s showdown with Jason Miller. After Trump bizarrely maintained that the NFL wrote him a letter complaining about the debate schedule, the CNN Reliable Sources host — who had done some actual checks on this claim — forced the campaign spokesman to admit on-air that no such letter existed.”

Sullivan had to go all the way back to March of 2015 for the only story harmful to Clinton which she liked: The New York Times article about Clinton’s use of a private e-mail server: “It provided the underpinning of the entire case against the Democratic nominee, and continues to resonate almost two years later. To put it mildly, this story had legs.”

Her two items I didn’t categorize as hostile or favorable to either candidate: “PBS Frontline’s The Choice 2016" and “NPR’s live debate fact-checks,” though I’d bet neither were “utterly fair” as she described the PBS show.

On CNN’s Reliable Sources on October 2, Sullivan denied the media are out to “take down Trump,” but she admitted there is an agenda:

“You know, I don’t think that Saturday Night Live or the media write large is trying to take down Trump. But I do think that there is, you know, a kind of way of thinking that many members of the media share. And it does creep into the, it creeps into comedy and it creeps into certainly commentary and sometimes it creeps into news story. Yes, I think it does.”