The world through Hollywood’s prism? Donald Trump is fueled by racism, Bernie Sanders is driven by idealism and Hillary Clinton is the competent one who will keep us safe.

“Look at anything Trump’s done. It plays into hatred,” actor Jeff Daniels charged on Monday’s edition of Bloomberg’s With All Due Respect, before sneering: “The hat should say, ‘Make America White Again.’”

As for the far-left socialist Sanders, Daniels trumpeted how “I love Bernie. I love the ideas he’s got,” citing his “ideals, let’s just make the world a great place” with “free health care and free college.” Alas, standing in the way of those “great ideas” is the fact “that thing called ‘Congress’ is a problem.”

Settling on Clinton, Daniels hailed how “she’s got international street cred and it’s a dangerous world and I like that she’s been around it several times.” Plus, “Bill Clinton is available as a sounding board, just internationally, I feel safer that way.”

From the May 9 With All Due Respect on Bloomberg TV: 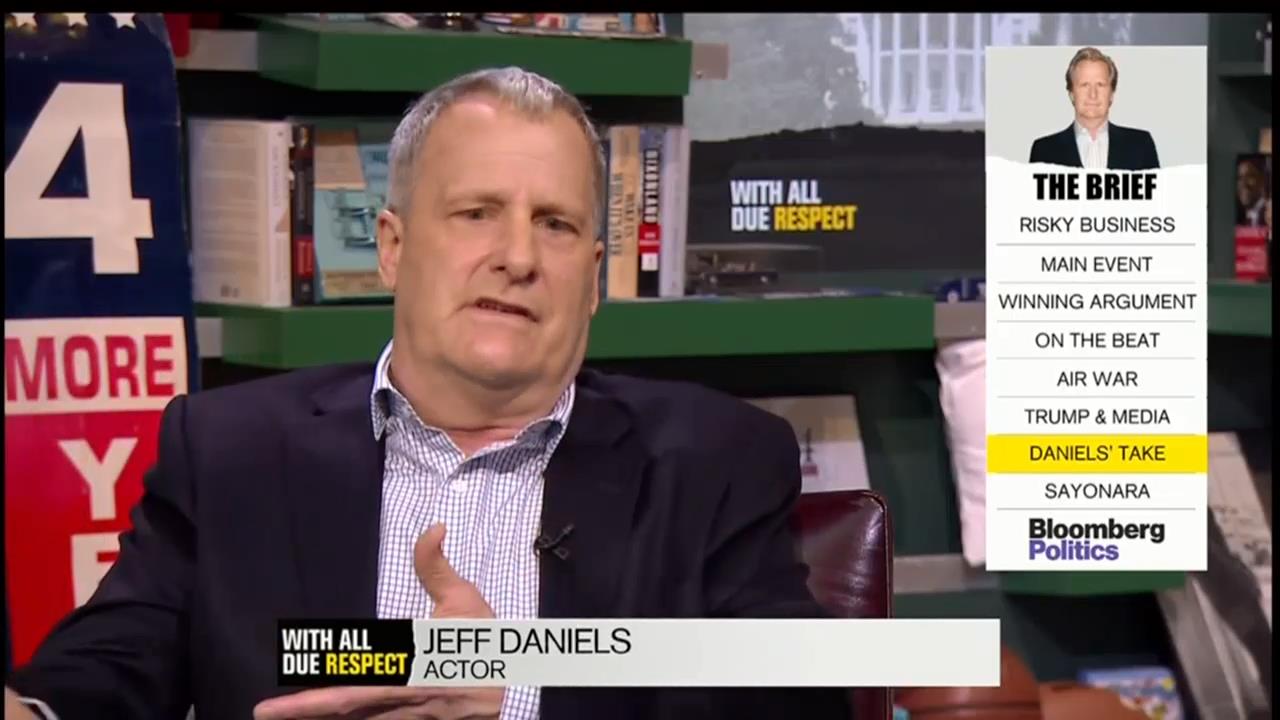 JEFF DANIELS: Look at anything that Trump’s done. It plays into hatred, it plays into what’s the worst possible thing we can create and then fan that flame. That’s why you’ve got racism and bigotry. The hat should say, ‘Make America White Again.’ That’s what it should say. That’s what it should say. And he knows that. He’s playing to that. Whether he can take it all the way to November or not, you want to say no, but where has he tripped up yet? I look at the stats and hope to hell that everyone who does not want him to be President shows up and votes.

JOHN HEILEMANN: Bernie Sanders won your home state of Michigan against Hillary Clinton in the primary. What do you think about Sanders and the Sanders movement?

DANIELS: I love Bernie. I love the ideas that he’s got. To me, it’s like somebody who went to Woodstock who now is running for President. And it’s all those ideals, let’s just make the world a great place and legalize this and free health care and free college and going for all of that. Great ideas. But, that thing called ‘Congress,’ you know, is a problem. And, I just, it’s not just the President of the United States. It’s the President of the world. Like Hillary or not, and I do, she’s got international street cred and it’s a dangerous world and I like that she’s been around it several times, certainly as Secretary of State and her whole history and the fact that, like him or not, Bill Clinton is available as a sounding board, just internationally, I feel safer that way.

Also on the celebrity-front on Monday night: