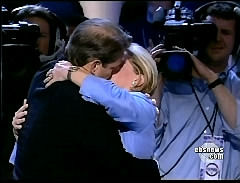 Is there anything a journalist cannot or will not twist to bring the topic back to how life would be so much better if only not for that awful George W. Bush? On Tuesday's CBS Evening News, with the help of the Washington Post's Sally Quinn, Sharyl Attkisson managed to blame news, that Al and Tipper Gore are separating, on how they never got over being denied the presidency despite winning the popular vote in 2000. If only Bush hadn't taken it from them.

Attkisson recalled “it's been ten years since that oddly public passionate kiss at the Democratic convention. That was followed by Gore winning the popular vote for President but losing the electoral vote. Family friend Sally Quinn says that may have done the marriage irreparable harm.”

Viewers then head from Quinn, who's married former Post Executive Editor Ben Bradlee and is now titular overseer of the paper's “On Faith” blog: “He obviously suffered a lot and still is suffering. He'll never get over that and neither will she.” (jpg of screen shot of Quinn)

Attkisson cheekily began her story: “While Al Gore was out fighting global warming, his marriage to Tipper was apparently cooling.”