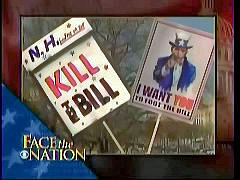 The morning after CBS News White House reporter Mark Knoller, in a tweet, slurred anti-ObamaCare protesters with the vulgar “tea bagger” sexual terminology, Bob Schieffer began Sunday’s Face the Nation with how the health care reform debate “that's been rancorous and mean from the start turned even nastier yesterday” with protesters “shouting ‘kill the bill!’ and ‘made in the USSR”’ as they supposedly “hurled racial epithets, even at civil rights icon John Lewis of Georgia, and sexual slurs at Massachusetts Democrat Barney Frank. Other legislators said the protesters spit on them and one lawmaker said it was like a page out of a time machine.”

In what way is “kill the bill” nasty?

Though the despicable actions, if true, were committed by a handful out of thousands, Saturday’s World News also used the incidents to discredit the cause of those rallying against ObamaCare: “Protesters against the plan gathered on the streets of the capital where late today we learned words shouted turned very ugly, reports of racial and homophobic slurs, one protester actually spitting on a Congressman,” ABC anchor David Muir announced, repeating: “Late word from Washington tonight about just how ugly the crowds gathered outside the Longworth office building have become.”

On Fox News Sunday, Carl Cameron reported the same incidents, but without Schieffer’s hyperbole and without leading his report with it: “Anti-reform protesters have been demonstrating at the Capitol for several days now, and there were some incidents yesterday. Lawmakers say they faced racial epithets, gay epithets as well as one lawmaker said he got spat on.”

From the start of the Sunday, March 21 Face the Nation on CBS: 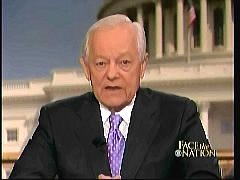 BOB SCHIEFFER: So today is the day. The House will finally vote on health care reform and a year-long debate that's been rancorous and mean from the start turned even nastier yesterday. Demonstrators protesting the bill poured into the halls of Congress shouting “Kill the bill!” and “Made in the USSR.” And as tempers rose, they hurled racial epithets, even at civil rights icon John Lewis of Georgia, and sexual slurs at Massachusetts Democrat Barney Frank. Other legislators said the protesters spit on them and one lawmaker said it was like a page out of a time machine.

One of the lawmakers who saw all this is the chief vote counter for the Democrats, Jim Clyburn, who is at the Capitol this morning still working the hallways for votes. He's with the Democrats' chief political strategist, Congressman Chris van Hollen of Maryland.

Congressman Clyburn, before we talk about this do you have the votes, what about these demonstrators yesterday? Have you seen anything like this in recent times?

CONGRESSMAN JAMES CLYBURN: No, not in recent times. Thank you so much for having us. The last time I saw anything like that was back in 1960. I celebrated a week ago the 50th anniversary of the march in Orangeburg that I helped to organize, the so-called Orangeburg 7 of which I was one. Two others, three of us, got together with some students last Monday to talk those experiences. And we were telling those students how this kind of stuff was behind us. I suspect that I might have to modify some of that after yesterday.

SCHIEFFER: I think I should add that Republican leaders this morning, along with Democrats such as yourself, have denounced these demonstrations. But be that as it may, it just shows how hot tempers are and how volatile this whole situation has been.