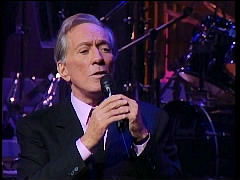 President Barack Obama “wants the country to fail,” legendary singer Andy Williams declared in flipping Rush Limbaugh's hope that Obama “fails” in his quest to enact left-wing policies, a remark which enraged liberals and the media for weeks. In an interview published in the October 3-9 edition of Radio Times magazine, the TV and radio program guide for the BBC which carries re-runs of Williams' 1960s NBC variety show, the 81-year-old Williams didn't hide his feelings about Obama: “Don't like him at all.”

London's Telegraph, in a September 28 article highlighted by the DrudgeReport, quoted from the interview which is not online. Williams starkly denounced Obama's world view:

I think he wants to create a socialist country. The people he associates with are very left-wing. One is registered as a communist. Obama is following Marxist theory. He's taken over the banks and the car industry. He wants the country to fail.

The “registered communist” is presumably a reference to Van Jones.

Politically, Williams is best-known as a friend of Robert and Ethel Kennedy who was at the Ambassador hotel when Kennedy was assassinated and sang Battle Hymn of the Republic at Kennedy's funeral.

Williams may pop up elsewhere in the media as he promotes an October 5 performance in London, a new season of the “Andy Williams All-Star Variety Show” at his “Moon River Theater” in Branson, Missouri (followed by his annual Christmas show) and the mid-October release of his new book, Moon River and Me: A Memoir.