Nets: Specter 'Driven Out' of GOP by 'Right Wing' and 'Fringe of Party' 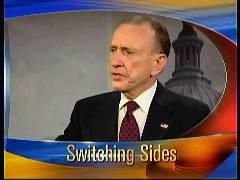 The evening newscasts on Tuesday night attributed Senator Arlen Specter's motivation for changing parties to how he realized he wouldn't win the Republican primary in Pennsylvania, but they also, just as they did with Senator Jim Jeffords in 2001, eagerly relayed -- without any challenge -- Specter's spin that, in the words of the TV journalists, he “had been driven out by the right-wing of the Republican Party,” the GOP's “increasingly conservative tilt” and “the fringe of the party.”

CBS framed its story around that convenient target as the Evening News showcased Specter's charge in its tease: “The party has shifted very far to the, to the right.” Katie Couric noted that Specter “acknowledged he cannot win the Republican primary, so he's becoming a Democrat. But as Chip Reid reports, Specter says there were other reasons behind the switch.” Setting up the same Specter soundbite as in the tease, Reid reported the “moderate” Specter “says he's leaving the Republican party because the Republican party left him.” Reid bolstered Specter's concern by asserting “200,000 Pennsylvania Republicans have registered as Democrats in just the past year. Specter blames the party's increasingly conservative tilt.” Specter exclaimed: “There ought to be a rebellion. There ought to be an uprising.”

On NBC, Kelly O'Donnell described how “he would be facing a much more conservative challenger” in the primary and “couldn't risk” losing, before she related Specter's rationalization “that voters who tend to turn out in the primaries tend to be on the fringe of the party, not a moderate Republican like he is.” ABC's Jonathan Karl highlighted how “Specter said he had been driven out by the right-wing of the Republican Party.” Then viewers were treated to Specter scolding conservatives: “They don't make any bones about their willingness to lose the general election if they can purify the party. There ought to be a rebellion. There ought to be an uprising.”

The MRC's Brad Wilmouth corrected the closed-captioning against the video to provide these transcripts of the CBS and NBC stories from Tuesday night, April 28:

SENATOR ARLEN SPECTER (D-PA): The party has shifted very far to the, to the right. 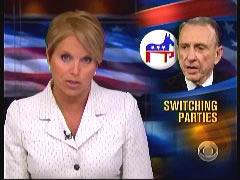 COURIC: Turning to politics now, and an announcement today that really shook things up in Washington and left Senate Democrats just one vote away from a filibuster-proof super-majority. Five-term Senator Arlen Specter of Pennsylvania acknowledged he cannot win the Republican primary, so he's becoming a Democrat. But as Chip Reid reports, Specter says there were other reasons behind the switch.

SPECTER: This is a painful decision.

SPECTER CLIP #1: I have found myself increasingly at odds with the Republican philosophy.

SPECTER CLIP #2: The party has shifted very far to the, to the right.

REID: The Pennsylvania Republican party is still furious over Specter's key vote in favor of the President's massive stimulus bill, and Specter admits his chances of winning the Republican primary against conservative Pat Toomey next year are bleak. 200,000 Pennsylvania Republicans have registered as Democrats in just the past year. Specter blames the party's increasingly conservative tilt.

MARK KNOLLER, CBS NEWS RADIO: You said you were pleased about Specter. Aren't you euphoric, ebullient? 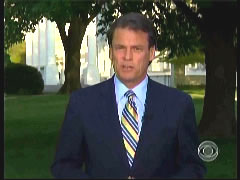 REID: Why so much joy at the White House? Look at the numbers: Democrats now have 58 votes in the Senate. If Democrat Al Franken wins the marathon recount in Minnesota, with Specter that would give the Democrats the magical 60th vote, the number needed to block Republican filibusters and push the Obama agenda through Congress. Specter insists he won't be an automatic 60th vote.

SPECTER: I'm going to vote the way I see it.

REID: Democrats have been trying to convince Specter to shift parties for more than five years, but it took fear of losing an election to finally get him to do it.

BRIAN WILLIAMS: We change topics now to politics and the shot heard ‘round Washington and elsewhere today. One analyst today said it was the biggest gift President Obama could possibly receive on the eve of his 100th day in office. The veteran Republican Senator Arlen Specter of Pennsylvania is tonight a Democrat. He switched parties today. That may give the Democrats a crucial edge in the Senate. Kelly O'Donnell covers the Hill for us and is with us from there with more on this tonight. Kelly, good evening.

KELLY O’DONNELL: Brian, it really did feel like a seismic shift here today. Arlen Specter has been the Republican Senator from Pennsylvania since Ronald Reagan took office back in 1981. And with his party switch, sure, it's about his own political survival. But it also means something more – more power for the President and the Democratic Party. So the background goes like this: Specter told us today he thought that he could not win re-election in a primary in his home state. He would be facing a much more conservative challenger, Congressman Pat Toomey, who almost beat him last time around. Now, Specter said he couldn’t risk that, and said that voters who tend to turn out in the primaries tend to be on the fringe of the party, not a moderate Republican like he is.

O’DONNELL: So, Brian, the bigger picture here is that this could get Democrats to 60, the magic number needed to stop a Republican filibuster. Sixty assumes Specter, and that Al Franken would win in Minnesota in that contested race. Now, Democrats are promising Specter a lot. They will endorse him, they’ll raise money for him, and the President plans to campaign for him. One more interesting nugget here today, Brian: We heard from Majority Leader Harry Reid, who has courted Specter, that he's talking to other Republicans urging them to cross the aisle, but Reid wouldn't name names.