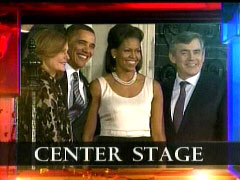 The broadcast networks continued their infatuation Thursday night with Michelle Obama as ABC anchor Charles Gibson teased: “Center stage. With substance and style, the First Lady steps onto the world stage, becoming something of a mega-star.” He soon equated her popularity with Jacqueline Kennedy, the last First Lady to so enchant the press. On NBC, Dawna Friesen trumpeted how “she has dazzled Britain with her style and her substance. From the palace to the streets, she has taken London town.” Highlighting the First Lady's appearance before a largely-minority group of school girls, Friesen hailed: “To such a diversity of girls from such an inspirational woman, the message couldn't have been more powerful.”

> In a wrap-up piece on the G-20 summit, anchor Katie Couric decided it was relevant to stress: “The people of London treated the Obamas like rock stars, the kind of reception an American President has not received in some time.”

> CBS reporter Chip Reid, over video of many waving raised hands from journalists trying to catch Obama's attention, pointed out how excited Obama made the press corps during his news conference: “The President continued his charm offensive with the nearly two thousand members of the international press corps who literally begged to ask questions.”

On Wednesday night, as recounted in my earlier NewsBusters post, NBC's Chuck Todd touted “America's unofficial royalty, the President and First Lady,” while Williams related: “There is no denying the Obamas from America are receiving a rock star reception on this trip. One London paper today called them 'American royalty.'” The CBS Evening News put “Michelle Mania” on screen and Couric teased: “The British give America's First Lady a welcome fit for a Queen.”

Well, the headlines from here are all about world leaders and economics. But the buzz, that's been about Michelle Obama. John Kennedy, on a trip to France once said, 'perhaps I should introduce myself. I'm the man who's accompanied Jacqueline Kennedy to Paris.' That's the impression she made then. The impression made by Michelle Obama now has been similar.

First Lady Michelle Obama has become a traveling event here in London. And there was evidence today proving why. In a new poll this week, her approval rating is right now higher than her husband's. Mrs. Obama visited a local school in London and positively overwhelmed her audience.

Some of Dawna Friesen's report:

FRIESEN: She has dazzled Britain with her style and her substance. From the palace to the streets, she has taken London town....

It was a speech from the heart. Mrs. Obama telling them they could all be just like her. 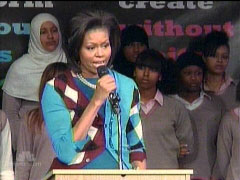 MICHELLE OBAMA, TO SCHOOL GIRLS: We need strong, smart, confident young women to stand up and take the reins. I want you to know that we have very much in common. For nothing in my life's path would have predicted that I'd be standing here as the first African-American First Lady of the United States of America. I wasn't raised with wealth or resources or any social standing to speak of.

FRIESEN: To such a diversity of girls from such an inspirational woman, the message couldn't have been more powerful.

MICHELLE OBAMA: You too can control your own destiny. Please remember that. If you want to know the reason why I'm standing here, it's because of education.