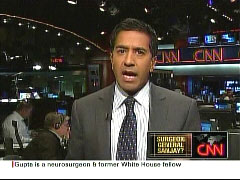 CNN medical correspondent Dr. Sanjay Gupta, whom President-elect Barack Obama has reportedly asked to take an administration post as Surgeon General and top health policy adviser, last year thought it noteworthy that the release of John McCain's medical records ignored the Senator's “mental health,” any “mention of post-traumatic stress disorder” or of “substance abuse.” Back in 2004, upon Ronald Reagan's passing, Gupta took to CNN to give legitimacy to claims of how throughout his presidency “many would accuse President Reagan of ignoring AIDS.” Gupta falsely charged that “the first time President Reagan would utter the word AIDS in public would be well into his second term, six years after the virus was discovered.”

The jump would take Gupta full circle back to activist liberal politics and policy-making. “He was a White House fellow in the late 1990s, writing speeches and crafting policy for then-First Lady Hillary Rodham Clinton,” the Washington Post's Ceci Connolly and Howard Kurtz recalled in a story for Wednesday's paper (“Obama Picks TV's Gupta for Medical Post”) which relayed that in addition to the Surgeon General slot “he has also been offered a top post in the new White House Office of Health Reform, twin duties that could make him the most influential Surgeon General in history.” The Post article also noted that Gupta, who joined CNN in 2001 and has since also reported for CBS News, “met for more than two hours with Obama in Chicago on Nov. 25.” 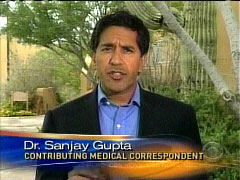 On Tuesday night, CNN devoted a segment of Anderson Cooper 360 to how, as CNN’s Dr, Sanjay Gupta put it, throughout his presidency “many would accuse President Reagan of ignoring AIDS,” as if Reagan talking about it would have done more to prevent it than those in the homosexual community modifying their unsafe sex practices. Leading into a Reagan clip from 1987, Gupta complained that “the first time President Reagan would utter the word AIDS in public would be well into his second term, six years after the virus was discovered.” In fact, Reagan talked about AIDS in 1985 and cited it repeatedly in his 1986 State of the Union address. Gupta relayed how one “AIDS activist” believes “the administration avoided AIDS all those years because of homophobia.”

[A]s official White House papers cited by Steven Hayward, author of the multi-volume Age of Reagan show, the 40th president spoke of AIDS no later than September 17, 1985. Responding to a question on AIDS research, the president said: “[I]ncluding what we have in the budget for '86, it will amount to over a half a billion dollars that we have provided for research on AIDS in addition to what I'm sure other medical groups are doing. And we have $100 million in the budget this year; it'll be 126 million next year. So, this is a top priority with us. Yes, there's no question about the seriousness of this and the need to find an answer.”

President Reagan's February 6, 1986 State of the Union address included this specific passage where he says the word "AIDS" five times: “We will continue, as a high priority, the fight against Acquired Immune Deficiency Syndrome (AIDS). An unprecedented research effort is underway to deal with this major epidemic public health threat. The number of AIDS cases is expected to increase. While there are hopes for drugs and vaccines against AIDS, none is immediately at hand. Consequently, efforts should focus on prevention, to inform and to lower risks of further transmission of the AIDS virus. To this end, I am asking the Surgeon General to prepare a report to the American people on AIDS.”