'Down and Dirty' Palin Like Agnew with 'Nasty' Attack on Obama 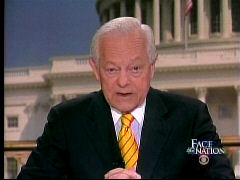 A week-and-half before he'll moderate the third and final presidential debate, CBS's Bob Schieffer opened Sunday's Face the Nation by calling a foul on one team as he took sides and denounced Sarah Palin's daring to say, that “our opponent is someone who sees America as imperfect enough to pal around with terrorists who targeted their own country,” as a sign of “a campaign that's turned down and dirty,” as well as “nasty,” thanks to John McCain's “new attack dog” who “took after Barack Obama in a style reminiscent of Spiro Agnew when he was Richard Nixon's running mate.” In the Washington press corps, a comparison to Agnew is no compliment.

Later in the program, he fretted to New York Times columnist David Brooks: “Do you think it's going to get nastier and nastier? It does look as if McCain is really going on the attack. You saw what Sarah Palin said.” Brooks, whom Schieffer labeled as a “conservative columnist,” assured Schieffer it would be an ineffective tactic since “Republicans have been using this attack -- too dangerous, too liberal” for “too long” and “you can't win that way anymore.”

Sunday night, ABC reporter David Wright described Palin's reference to Bill Ayers as “incendiary” as he asserted on World News: “Today, in San Francisco, Sarah Palin defended her incendiary comments that Barack Obama has been 'palling around' with terrorists.” Earlier in the day, ABC's This Week host George Stephanopoulos had scolded guest Tim Pawlenty about Palin's charge: “When Governor Palin says of Obama 'this is not a man who sees America as you do,' it sure does sound like she is questioning Senator Obama's patriotism.”

From the Sunday, October 4 Face the Nation on CBS:

BOB SCHIEFFER: Today on Face the Nation: the Palin factor, the bailout package and a campaign that's turned down and dirty. Down in the polls, the McCain campaign has found a new attack dog:

SARAH PALIN: The heels are on, the gloves come off.

SCHIEFFER: McCain's once embattled running mate, Sarah Palin. Will it work? And what bout the bailout, will it make a difference in this campaign? All questions for Senator Dianne Feinstein, Democrat of California; Representative Heather Wilson, Republican of New Mexico; House Minority Whip Roy Blunt, Republican of Missouri; and Governor of Michigan Jennifer Granholm. David Brooks will be here with a Campaign Quick Check, and I'll have a final word on the bailout. But first, the campaign turns nasty, on Face the Nation.

SCHIEFFER: Well, good morning again. We had two major events last week. First, Congress passed the bailout. We won't know for a while if it is going to work. What we do know is that we have a very hot presidential campaign, and we saw last week the second thing, the emergence of the -- Sarah Palin as the McCain camp's new attack dog. Yesterday she took after Barack Obama in a style reminiscent of Spiro Agnew when he was Richard Nixon's running mate. Listen to what she said in California.

SARAH PALIN: These are the same guys who think patriotism is paying higher taxes. Remember, that's what Joe Biden said. Now, this is not a man who sees America as you and I see America. We see America as a force for good in this world. We see an America of exceptionalism. [reacting to crowd] Yes, USA! USA! Our opponent is someone who sees America as imperfect enough to pal around with terrorists who targeted their own country.

SCHIEFFER: So, that was Sarah Palin yesterday out in California. Let's start with Congresswoman Heather Wilson. Do you agree with that line of attack, that Barack Obama does not see America as a force for good?

U.S. REP. HEATHER WILSON (R-NM): He has actually, you know, he goes over to Germany and talks to the Germans about America and the need to tear down the walls between the United States and our European allies as if it's all America's fault that we've, you know, we're in the situation that we're in. That's not what we expect from our President. We expect someone to stand up for America and to realize that America is a force for good in the world and has been for a century.

SCHIEFFER: Well, that sounds like you're saying that he's somehow unpatriotic, which seemed to be the underlying theme of what she said yesterday, Congresswoman.

WILSON: Well, he has talked down about America. And you know, we've always had this history of saying, “Well, you know, politics ends at the water's edge,” and it didn't for Barack Obama. He's been critical not only of the President, but of American policy and hence of a -- has kind of a negative view of America in the world. That's not unusual, frankly, among liberals in kind of post-Vietnam America to say that America's the problem. I think Sarah Palin believes that America is part of the solution. We are an exceptional country, we are a force for good and we need to talk about the good things we do.

SCHIEFFER: Well, let's see what Senator Feinstein would say about that. The ad also suggested that he is the pal of a -- of a terrorist. That refers, of course, to Bill Ayers, who was part of the anti-Vietnam underground weather people, I think was the name of it. He's now a professor in Chicago. She suggested that they're pals. What about this whole thing, Senator? 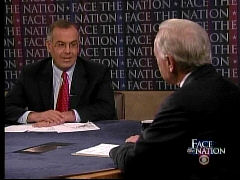 SCHIEFFER: Do you think it's going to get nastier and nastier? It does look as if McCain is really going on the attack. You saw what Sarah Palin said.

DAVID BROOKS: Right. Liberal, and -- she botched -- there's a legitimate point in there, the belief in American exceptionalism, Americans can stand alone because we're an unusual nation. But she botched the argument of that. And I just don't think that's going to work this year. You know, Republicans have been using this attack -- too dangerous, too liberal, too liberal -- too long. They used it against Paul Wellstone, the Senator in Minnesota, about a decade ago. It's worked less and less each time. This economic crisis changes the climate of the country. We were in a conservative era where conservatives could win running conservative vs. liberal campaigns. Because of this economic crisis and a bunch of other stuff, we're no longer in a conservative era. You can't win that way anymore. You better win the way of this new era. And I'm afraid the Republicans are not adapting to this new era.